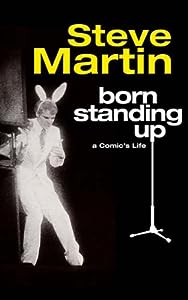 Cover of Born Standing Up

It’s safe to say that Steve Martin is a pretty good writer. Even the stuff he is embarrassed by is really, really good. Being a good writer, though, and an interesting fellow on top of that, it’s taken him a while to do a memoir.

Born Standing Up is that memoir, covering his career in stand-up comedy. When it came out, a lot of people complained that it only went up to about 1981, and there’s been, well, a whole lot of time and Steve Martin projects between then and now; that’s not really an issue for me. Born Standing Up wasn’t INTENDED to be anything more than it was, and he’s up front about that starting from the subtitle “A Comic’s Life”. If you know Steve Martin, you know that while a wildly successful stand-up, that was only a small part of his life. And in case it didn’t set it yet, the first chapter includes lines like “my decade was the seventies”, which, again, is true ONLY if you’re talking about his stand-up career. So, yeah. We’ll have to wait if there’s a full autobiography to come, but this isn’t that.

Rather, in addition to being a memoir of this period of his life, it’s also a book on comedy, and how it works. Martin deconstructs both his routine and precisely WHY it worked when it did; in fact, he downplays his own talent — to hear him tell it, it was just a function of doing the right thing in the right place at the right time. While, yes, there is a function of that, a lesser comedian wouldn’t have done nearly as well, nor made a career for himself as a serious actor, writer, banjo player, and, well, just about everything else he’s done. (Not bad for someone with nose glasses.)

Born Standing Up is a pretty thin volume; it’s about 200 pages, with a relatively big font and lots of photos (mostly from his younger days back when he didn’t have white hair!), and it’s a pretty quick read. If the complaints mentioned above were that it almost seems slight, and we wanted more Martin — I could agree with that. But given the narrow scope; there’s probably not too much more he could have said.

And one more thing? The stuff in Cruel Shoes? That he’s embarrassed by now? (And slams in this book, even?) He wrote that in college, probably a decade before the book came out. And it was what caused Mason Williams to hire him for The Smothers Brothers Comedy Hour (and pay him out of Williams’ own pocket) as a writer. I wish I had the talent to be embarrassed by stuff like THAT.