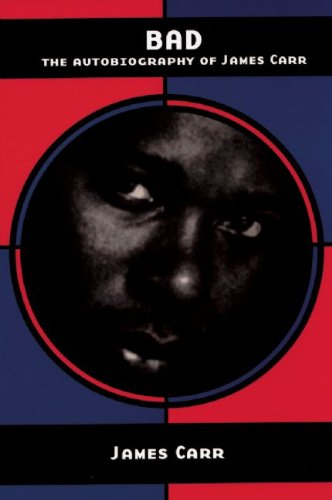 , I’ve been working my way through (and for the most part enjoying the hell out of) The NABAT Books Series.

With BAD, James Carr was historically notable in that he co-founded The San Quentin Wolf Pack, an early prison reform movement and a predecessor to The Black Panthers. Otherwise his life would have been pointless; this autobiography is one of the few I’ve read by someone wholly without a conscience (William F. Buckley aside).

That he found himself a historical footnote is purely a coincidence. James Carr was a true sociopath who committed atrocious acts of violence mainly to alleviate ennui. He eventually embraced Marx and Lenin and the vague notion of “revolution” with a pedantic zeal but without having any experience in the world against which to apply those philosophies. Even his supposed redemption in marrying and fathering a child, creating a nucleus of intimacy and difference, before being gunned down was punctuated by words and actions that belied any semblance of being more than a domesticated monster. It’s also worth noting that the sentences he earned that resulted in his spending the majority of his life spent in prison were, without exception, wholly justified.

In any struggle for an oppressed people to gain freedom, equality, rights, or whatnot, an important early step is expressing and moving past very real and very justified anger. But too often people — and entire movements — get mired in anger, refusing or unable to move past it to to make their voices heard and their positions respected. Too often they end up setting the cause for which they are working back. You see this in the sputtering populist rage of Tea Party types, in the smashing and burning of corporate symbols by the ultra left at G8 protests, in the impotent century-old calls for oppressed workers to arise in a Socialist revolution. None of these groups will ever see their agenda succeed until they move past focusing on anger and onto constructive change. Most likely none ever will.

That James Carr is celebrated as a hero and cultural icon is due to his life being an expression of rage against the world. And that in a way was necessary for the times in that his expression of anger, even though it didn’t contain even a speck of altruism, was used by others as a catalyst, albeit vicarious, for an early stage of overcoming oppression. But based on his own words, the highest form of nonviolent emotion Carr was capable of expressing was one of prison fraternity. I doubt he had the emotional capacity to move beyond a primal stage to actually make a difference. And it’s doubtful Carr could have come to any other end than one of pointless violence.

Still, the detached voice in which he unapologetically describes his life — raping, murdering, stealing, maiming — made this a captivating book, and a study of a man without emotion swept into the larger current of a movement others embodied in him and a movement I can’t decide if he helped or hindered.