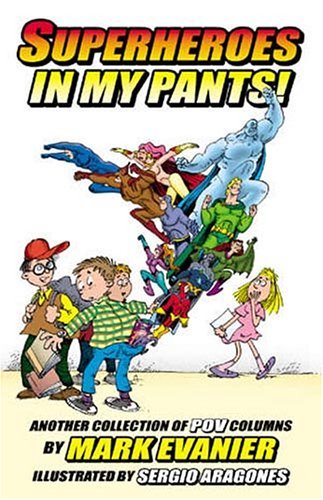 This is the third-and-last collection of Mark Evanier‘s POV columns. It’s hard to say which of the three is the best; I tend to think of the three volumes as one book. I did read all three of them back-to-back, partly because they’re all quick reads, but mostly just because each volume left me wanting more of Evanier’s writing. The topics are all right up my alley, of course — considering that most of the columns are about comics — and Evanier’s got such a way with words, you’d think he’d been writing professionally since 1969 or something.

The title essay is mostly an argument against the more adult, angst-ridden superheroes — Evanier sees superheroes as characters as a vehicle for escapism, and, well, while being the suave Bruce Wayne who transforms into the hyper-competent and moral Batman would be fun, no one would really want to be the more dark Batman that’s as insane as the villains he battles. Though I disagree with Evanier’s assessment (I LIKE a lot of the angsty, dark superhero stories; I’m a fan of Watchmen

and The Killing Joke, and Arkham Asylum and all that, and doubt Evanier particularly likes these volumes. (Which, of course, is not to say that a “dark” Batman story, for instance, is better than a classic-style Batman story by nature — there’s a LOT of ways to do “dark” poorly, and to discount all the non-dark stories as “childish” is likewise a mistake.)

Perhaps because while I appreciate Evanier’s points but choose to disagree with him, my favorite essays in this volume is not the title piece, but the three-essay series on “Unfinanced Entrepreneurs”, a/k/a, folks who ask creative types to make a comic book for them without any actual payment, except for the riches that are SURE to come later. It’s an interesting series, and can be a bit of a cautionary tale for folks like me who’ve always been interested in doing comics or animation but cannot draw worth a damn — but then, most of the techniques they use aren’t ones any would consider ethical by any means. But at least it’s a good example on how to NOT look for a collaborator.

Between that, there’s all sorts of different nuggets in here, about fans, creators, conventions, the talent of Mort Drucker, and, well, lots of stuff that happened to cross Evanier’s mind that he thought might be worthy for a column. And they all are. Of course, he’d probably be able to find a way of making an essay about receiving the yearly Yellow Pages interesting.