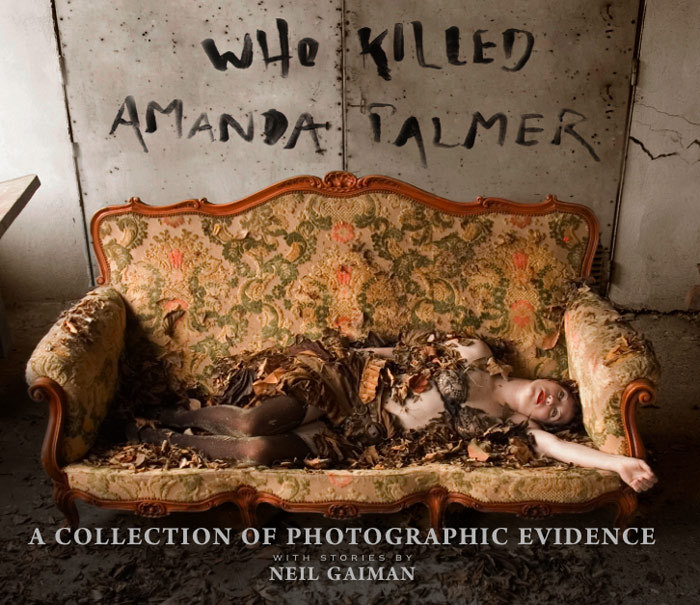 It’s not very often you find a coffee table book of nothing but staged photos of corpses. Or, rarer still, one corpse in many different settings. In fact, I’m not sure how many coffee tables Who Killed Amanda Palmer will be on — but it’d fit in on one, and I think it’d be a nice “potential cool person” sign to see it.

Who Killed Amanda Palmer is a self-published edition of 10,000, so, if you’re thinking about picking it up, you better get-to-gettin’. Particularly because it appeals to two sets of fans — AFP fans, of course AND Neil Gaiman fans, as he wrote pieces of flash fiction based on several of the photographs — both of whom are known to be pretty obsessive and buy up anything related to the objects of their fandom.

As for the book — firstly, I’m happy to announce that it’s much better in binding than the first printing of The Virginia Companion

— hardly anything fell out at all this time! (Actually, nothing fell out — AND if you’re worried about TVC, the new edition has been fixed and stays together as well, so you won’t have a pile of pages on the floor the first time you open it.) It’s a large-format book with nice, heavy paper. Every page is in full-color (except for the pages with lyrics from the album

), and the design is visually interesting. Regardless of whether or not you like Amanda Palmer‘s work, you have to admit that she typically goes all-out in terms of giving fans their money’s worth; her stuff is typically pretty elaborate in packaging with lots of bonuses and whatnot. (See, labels — THIS is how to get people to buy stuff — make it worth our time and money.)

Though I’m not the biggest Gaiman fan, the stories are pretty good as well — the abbreviated length gives him room to play with structure and style — which is welcomed in his prose work, as I’ve often found it kind of pedestrian in form. The brief story of the writer in the hot-air balloon stands out — particularly paired with its photo of Amanda Palmer lying dead in a field after a shopping trip, head bashed in by a typewriter.

The composition of the photos (by Kyle Cassidy, Beth Hommel, Amanda Palmer herself and many others) is typically striking as well. There’s the aforementioned typewriter death, and the one of her hanged on a swingset next to a small boy happily swinging in a more traditional sense. Not to mention the one taken in a zoo featuring Palmer’s corpse next to some confused wallabies. Some of the deaths are violent, some are accidental, some are mysterious and unexplained. Oddly, some feature a dead Amanda Palmer next to a living one — these ones are typically my least favorites — though the story that goes along with one of Palmer coming from the future to kill a past self is pretty good.

While the book might not be for everyone — it’s unlikely to convert any Amanda Palmer non-fans, not to mention that some of the photos might be upsetting or triggering to survivors of violent crime — if it DOES sound like it’s up your alley, it probably is. And just from a production standpoint, it’s a beautifully made book, and I’m always a fan of books as Objets D’Art. So, yes — if you’re on the fence, consider this a shove in the right direction. But try not to get killed on the way down.