I first discovered Ben Passmore when my friend April found a copy of his floppy, Your Black Friend at Elliott Bay Book Company. It was a quick read and April, Ben and I passed it around that afternoon and agreed it was the best thing any of us had picked up that day. At the time, I didn’t know who made it — I didn’t see Passmore’s name on the comic (though I may have just missed it), and when I saw the animated version of the comic (which you can watch below), I was sure to remember his name. Thankfully, this year, Passmore released Your Black Friend and Other Strangers, an anthology collecting that piece and more of his work — and the rest of it is as good as that floppy we discovered that summer day. 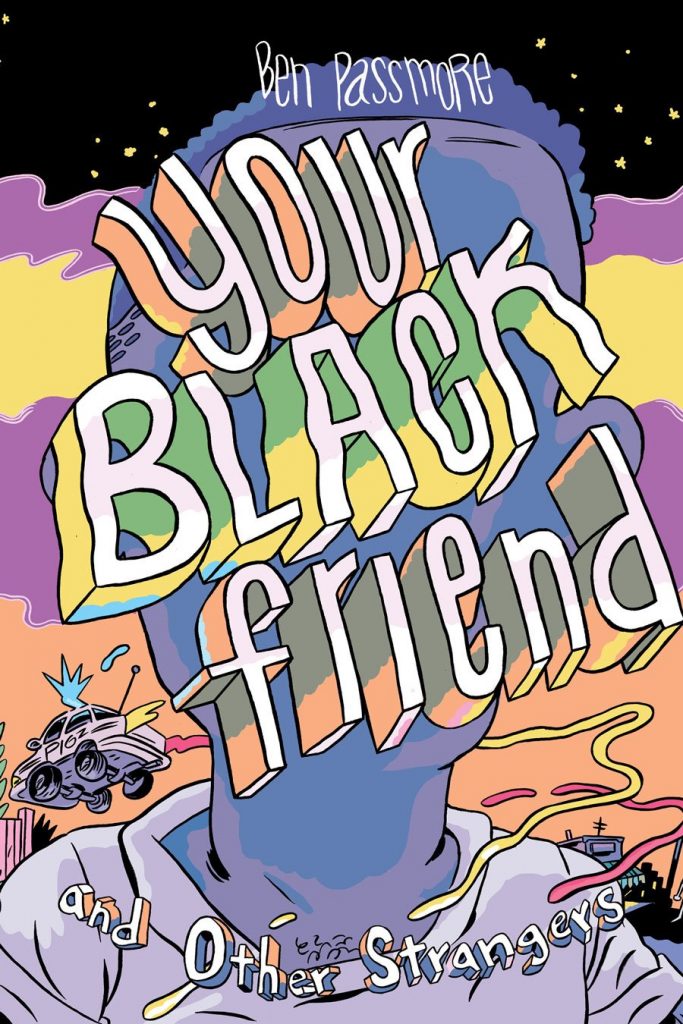 The title story is the star of the book, an open letter of sorts to white people — mostly those who consider themselves “woke,” but still engage in racism and white supremacy. The narrator talks about navigating white spaces and dealing with the day-to-day racism that “woke” white people don’t even realize they engage in. (I am not excusing myself from this descriptor; I’ve made a number of mistakes myself that I’m ashamed of.) But it’s not preachy — in places, it’s funny, like when the narrator knows he’s not supposed to be eating his po-boy in the coffee shop while he talks with his friend, but hopes the barista suffers too much white guilt to call him on it. As with the other stories in this collection, it’s insightful and engaging.

Your Black Friend isn’t the only one-shot collected here. His zine Goodbye is also reproduced, and is another highlight of the anthology. Goodbye itself feels like a collection, the way it bounces from different characters, and though it feels like each section is a concrete story, Passmore plays with form to incorporate the stories into a whole. And, hey, it features a retelling/debunking of Plato (or Hedwig’s) story of the origin of love, framed as a way to sell someone on group sex!

Other stories touch on the destruction of Confederate monuments, and reminds us that the Unite the Right rally started to “protect” them. (I’m writing this on the day that the piece of shit who murdered Heather Heyer was sentenced to life plus 419 years in prison.) Passmore is sure to mention, too, that most of the Confederate monuments in question were erected in the 1960s to attack the civil rights movement — to show Black people “their place.” (Seriously: tear them the fuck down.)

Though the book talks about real-world issues, some stories like “OK Stoopd” and “The Vampire” have more fantastical settings. (The former involves a fascist, cannibalistic giant chicken.) Others are non-fiction, of the type that appears in The Nib (who has published Passmore). And though the settings might change, Passmore’s voice is clear throughout. His work is uniformly amazing, and should be required reading for, well, just about everyone.

Watch the “Your Black Friend” animated short below: