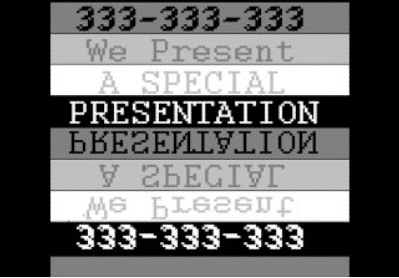 I know, I know, it’s old news, but I was just thinking about this online… prank?  If that’s the right word?  I’m not sure it is.  But anyway, it was a ongoing-though-ended thing called “The Wyoming Project”.  The story was that, a la the Max Headroom hacker in Chicago, there was some hacking going on in a Wyoming cable company.  It’d be an on-going thing, where they’d basically show some text, then a creepy face, then more text, and cycle through the faces from different camera angles.  Also, there were frequencies that would be played that could cause hallucinations and sickness in some viewers.

This never actually happened of course, but it was the product of a couple Something Awful goons.  But still, as a media geek who really likes hearing about that sort of thing (I mean, dude, the video logo (created by the very talented Lee Hughey) for this site is based on the CIVIC TV Ident from Videodrome, so you probably should have gathered that by now), it was basically gold.  For more, including the six posted videos, I Love Happy Cube and its corresponding, more complete wiki are where you wanna be.  It’s pretty fun, enjoy.

YOU ARE LOST ON THE PATH