It’s been a while since Thomas Dolby has been on the music scene. Not since 1994’s A Gate To The Mind’s Eye has Dolby released any new studio work. He toured in 2006 and has had a couple of live albums here and there, but no wholly new material. However, that’s about to change.

This change has been in the making for some time now, as Dolby is roughly halfway through the creation of his first studio album in over fifteen years. A Map Of The Floating City, an album comprising three suites, will begin distribution on June 12 as a digital download from Dolby’s site and will be available in increments. The first suite will be released as a stand-alone piece, with the second and third suites being made available on later dates. Following that, Dolby intends to release a fully-realized album with additional material.

Any Dolby fan will be aware of just how much in his style this approach is; as CEO of the company that established the RMF file format and the creator of countless ringtones, Dolby has been immersed in the digital world for a long time. Instead of doing things the same old way as some artists are known to do, Dolby evolves and changes with the times, staying right on top of, and even being involved in, new developments. But that’s Dolby the businessman… what about Dolby the artist?

Well, fans can decide for themselves. A new track from A Map Of The Floating City, “Love Is A Loaded Gun,” is being offered as a free downloadable mp3 for anyone who wants to sign up for the Dolby Fan Club. The song, a slow, melancholic piano piece, is a bit of a departure from the style of the old, established Dolby, but retains his mastery of lyrics and storytelling and feels both a bit new and a bit familiar at the same time. It shows promise and makes one all the more eager to hear the new album in full. 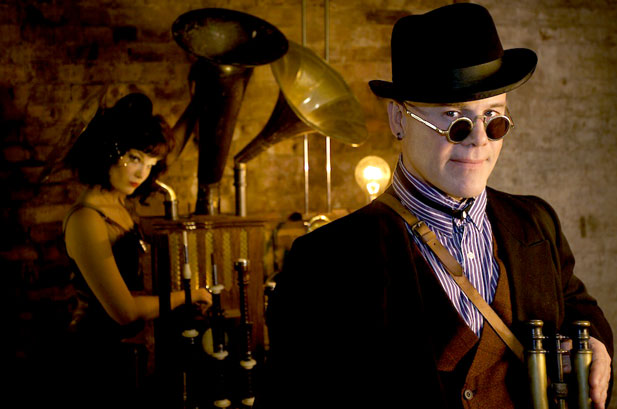 Dolby isn’t going at it alone, either… artists such as Regina Spektor, Imogen Heap, and Mark Knopfler will appear as well, along with former Buggle and fellow Camera Club member Bruce Woolley. No label is currently involved (Dolby has expressed uncertainty that a label will be involved at all), with Dolby’s site being the place for fans to watch.

An enthusiastic “welcome back” to Mr. Dolby. It’s good to hear from you again.