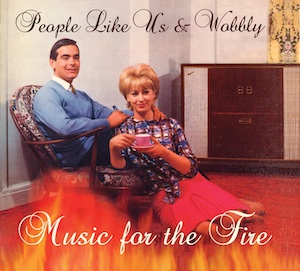 This is the first true People Like Us album I’ve listened to — Vicki Bennett, who is PLU, has always been on my periphery, though.  I’d mostly known her for involvement with WFMU and the only album of hers I had listened to was the remix album Hate People Like Us.  Listening now to her brand new album with Wobbly, Music For The Fire, I can now tell that remix album isn’t a great representative of her work, which does stand to reason.  Likewise, I tend to think of Wobbly’s solo work as a bit more on the experimental side of found sound (if an already experimental genre can have an experimental side) — more Otomo Yoshihide, less Bran Flakes. Music For The Fire, though, is very musical and melodic; it even comes with a lyric sheet, put together from the vocal samples.

The music is quite loop-based — I think there may be some live instrumentation, but it’s in the background — and if there’s not, I wouldn’t be too surprised.  Many of the loops aren’t immediately recognizable, but a few pop out like a Carpenters sample in “Naked Little Girl”.  But recognizablity isn’t the point — this isn’t like a Girl Talk album that acts like a pop blender.  Though I like Girl Talk, a lot of his stuff doesn’t resonate with me — it feels more like a particularly deft parlor trick, though one I enjoy listening to.  Work like this, though, is more about constructing a narrative out of disparate parts.  The narrative is often fractured but a mood is created.  There’s a dreamlike quality to it, but even when it can be creepy, it’s not really nightmarish.  Just an eerie place, though not uninviting.

I’m a little hesitant to pick out stand-out tracks — though each piece is separate, the entire album flows like a full work.  It doesn’t feel like a record you would really put on shuffle — more an album you’d sit down with.  Ideally, Illegal Art will release a vinyl edition so you can sit down with the giant cover art and stare at the sleeve and notes while the record spins.  I’m not sure if that’ll actually happen, but it’d be nice.  That said, I’d recommend just making a playlist in your mp3 player of choice and sitting down and listening to it, preferably with headphones.  After you’ve heard it a few times, it’s probably cool to start putting it in shuffles and whatnot; but the album really deserves to be listened straight through.  And you deserve to hear it.  Illegal Art’s been putting out great records for a long time now, and this is yet another in that run.  Dig it.