First of all, I am in fact, a card carrying member of the furry fandom. But when I refer to it, I call it Teh Furreh Fandumb, so that should show you how serious I take this fandom. (If you don’t know what a ‘furry’ is, I suggest looking at Wikipedia for a general idea.)

Secondly, what is a fursuit? To put it succinctly, a ‘fursuit’ is a mascot costume made of a personally developed character. A personal character, usually an anthropomorphic animal character that is typically created by the wearer. Sometimes the wearer makes the costume themselves, or they commission someone else to do so. The amount of people who are making these suits are growing day by day and some of the more adept are actually making it a profession.

I have three of them myself. One in each of the basic categories of fursuits. The first one I got was in 2005 of my character Eryshé (pronounced EE-RYE-SHAY) Falafel, a full suit fursuit. Meaning that the costume covers the performer from head to toe. I got this fursuit made by Toonsuits.com, when I was still fairly new to the fandom. The price was fairly inexpensive, since some builders can charge up to and beyond two thousand dollars for such a costume, depending on how elaborate you want it. Eryshé is a combination of a cat and a rabbit, so that’s why he has the oddly shaped ears and long tail. Eryshé also wears regular clothes, although he takes a 3XL shirt and 2XL pants, so it looks natural on the character. 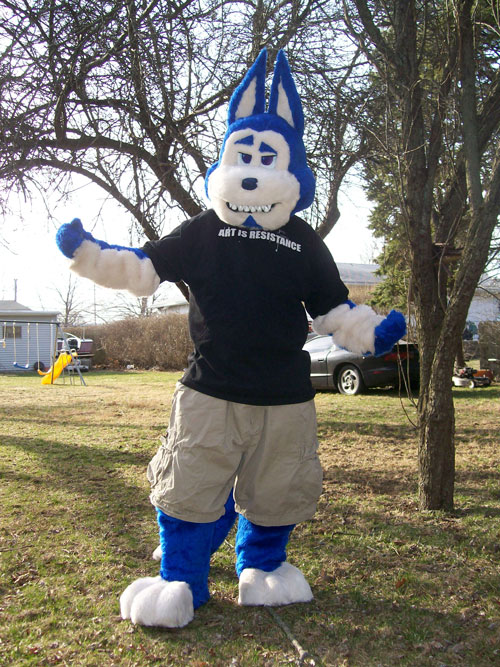 The next fursuit I got was of Division Fahrenheit, a bright red kangaroo partial, as in a partial costume. This means you have the head, hands & feet paws, and a tail, which has a loop on the end, so you can wear it with a belt. So you can wear the fursuit with your regular clothes, or relatable clothing to the character. A big plus to having a partial, is that you don’t heat up as quickly as you would with a full suit. To help to keep the performer cool, fursuit builders will incorporate a small, noiseless computer fan into the head, so that the performer doesn’t overheat. What is cool about the kangaroo partial, is that builder, Critter Country, constructed earholes in the head so it can vent the hot air naturally! It also has a moving jaw that rests underneath my chin, so I can talk in the costume if I want, or more importantly I can take a drink of water without having to take off the head (it is funny when you see a big toony kangaroo stick a water bottle in its mouth and drink the water!). The articulated jaw is made by building the head around a balaclava, with a piece of elastic sown in so the jaw snaps back. You can also see Division’s lip-synching skills on my YouTube channel. 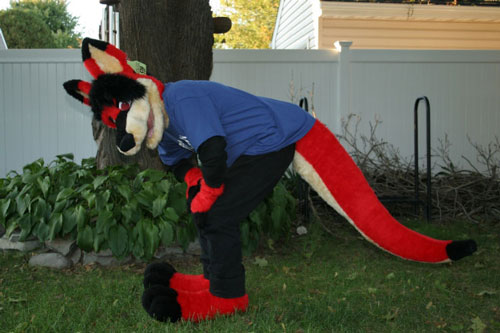 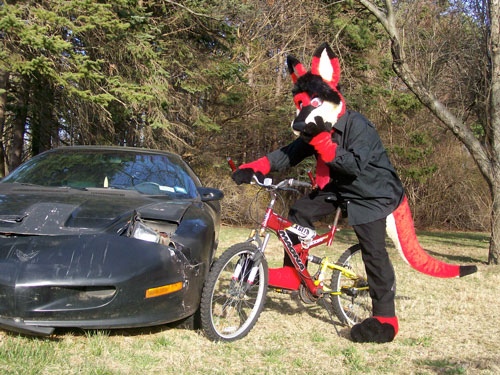 Finally, I have a kigurumi of my pig character, Patrick, made by Mango Island Creations. Kigurumi, which is Japanese for a costumed animal character, is a one-piece pajama! It’s made by a thinner material (in this case, fleece), and has a hood made to look like the head of the character. It is buttoned up the front and the fit is very loose — kinda like the furry version of a athletic outfit! Great for hanging out and much more economical than getting a traditional fursuit. This is a recent trend in the fandom, coming from the Japanese, who make one piece pajamas of popular characters like Pokémon, DIsney characters and popular animals. Like the traditional fursuits, you can get these customized as well, for a bit extra. 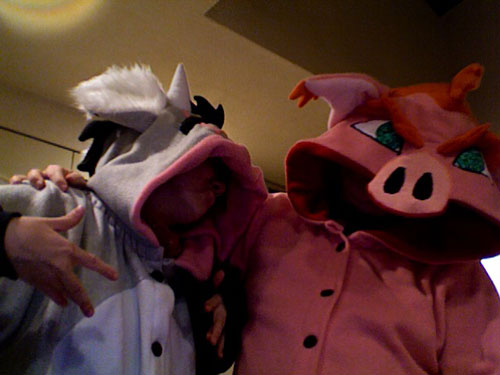 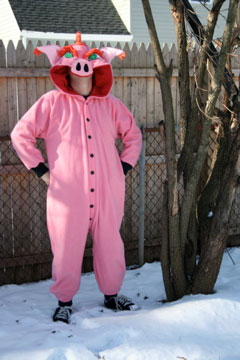 So what’s it like to fursuit? Well, your senses are deprived, the most notable is your sight and your hands. Your sight in the fursuit is like wearing sunglasses indoor. Depending on how the fursuit is built, there is always going to be a limited range of vision (unless the head is designed to use your own eyes). In most cases, your peripheral vision will be effected. Your hands are limited as well, since your paws can be just glove-like paws to toony four fingered gloves which effect your ability to grasp and hold things. This is why most people in fursuits (or in mascot costumes) when they go out in public, will have a “handler” with him. The handler is like bodyguard, and makes sure that the fursuiter is safe and doesn’t get hurt by the public or by himself, because of the limited sight and touch. They also help in guiding the performer to opportunities, such as people who want to pose with character for pictures, or even business cards to promote the performer!

Aside from going to furry conventions, or even regular conventions, there are many places where a fursuiter can strut their stuff. Oftentimes, they will volunteer their time, by going to charity events and performing in their costumes! I will be doing this for the first time at the end of August for Mascot Day with the baseball team the Long Island Ducks. Before the Ducks play ball, the mascots with have a game of dodgeball, then be available for meet & greets and photo opportunities after that! I’m looking forward to being there! Another activity that fursuiters like to do is called guerilla fursuiting. What that means is showing up, unannounced to a park, a store (like a pet store), or a public outing! In most cases, you are usually well received, but it is always wise, to have some a handler when you are in public. Malls are unfortunately off limits as a rule. Most malls have policies that you cannot have something covering your face, so it’s usually a good idea to get permission to romp around a mall in costume. When in doubt, you can always ask.

One of my recent and funny experiences in fursuit was a couple of months ago when the local fair came into town. I went with my friend Shannon, who runs Mango Island Creations, and her friends. I was wearing the Division partial, and Shannon was wearing her fursuit, Sapphire, a teal colored batfox hybrid. Gave lots of teenagers (girls AND boys) pounds and hugs. There was one guy who kept dancing with us and was screaming to put the pictures on Facebook (it was obvious that he was on something). I messed with him by saying that we were regular people NOT animal people. One sad moment at the fair was a baby that was scared of us and was crying. I countered it by being even more scared than the baby, hiding behind the friends and shaking like I was horrified. But it was such a fun night, that I went again the next night with friends! 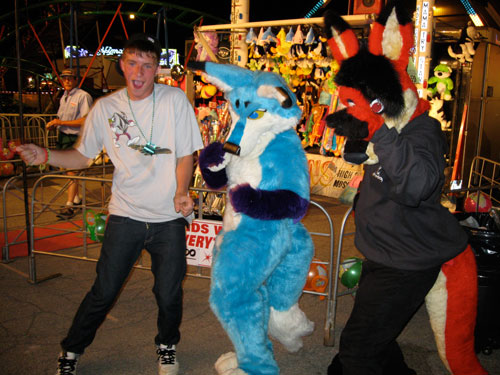 But my favorite experience was at a big convention in Toronto in 2007. I was just wandering around the con in my Division fursuit with my friend Paul filming me. I had been getting lots of hugs from some cute girls dressed in anime costumes. But one woman wore a Troma shirt and sported short-cut colored hair. For some reason, she had to get TWO separate pictures with me! She sure was adorable, but I was too shy to ask her if she was single. Soon after that, I posed with a family for pictures. The mother was holding her son, who was a little shy. After the picture, I started crouching so he was looking down on me and I was slowly trying to tickle him, getting closer, and backing away, etc…, until I lightly touched him and he giggled. Then again I tickled, and he giggled, until I got him to belly laugh. I loved that moment, and I have it on DVD, thanks to my friend Paul.

I kinda doubt that I’ve convinced any non-furry people to shell out their hard earned cash (in these times) to actually go out there and commission somebody to make a fursuit, but if you are curious about it, I can at least bring you a couple of pointers. If you are a first timer, I would suggest getting a partial, just for the economical reasons, and for the fact that you wont get heated up as quickly as a full suit would. Start looking at websites for fursuit builders, join a forum, or a community that’s on a blog (like LiveJournal). See if they have archives of questions that other first-time buyers have asked. Ask people about who they recommend, and who to stay away from. Do your research. Remember, you’ll be spending a bit of money for a fursuit, make sure you’re comfortable with a seller, and how they make it, and how they do business. So, let’s say you’ve got your fursuit, an event to go to, and a place where you can take a break all covered. Now you are ready to perform. Remember the most expressive part of your body is YOUR FACE. And your face is COVERED when you are wearing your fursuit, so you must use every other part of your body to express emotion, otherwise you are completely missing the point in wearing one! Too many times when I see fursuiters, they walk as if they are zombies, I get no sense of what their character is like. Beautifully made fursuits are nice to look at, but you need to have the performance to back it up. Even if you have a spring in your step, that will make a difference! Practice in front of a full length mirror, march in place, dance along to music, show how you can express emotion using your body!

There is of course the seedy side to fursuiting, as you might be aware from the obvious media coverage. Understand that it does occur, but not as much as you might think. The media tends to hype small aspects of the furry fandom to garner attention for themselves. For myself, I have absolutely no interest in anything like that (does the word “rugburn” mean anything?), and have yet to see that going on out in the open at a convention. I’m in it (as well as the majority of people within the fandom) for the fun of it, to make random people laugh and smile, to take funny pictures, to help people forget about their troubles, if only for a minute. Fursuiters do it for that reason as well, to step out of the stress of our real lives, and become something else for a while. There’s nothing like walking past a full length mirror while you are in a fursuit, and seeing something else other than your own face looking back at you. It’s magical, and its significance isn’t lost on me. I revel in its feeling and I think it’s a subtle form of therapy that helps me to deal with the struggles of my life. 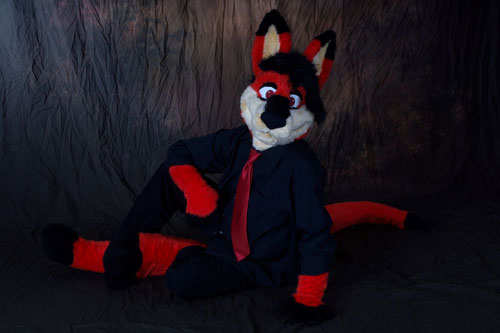 Divvy strikes a pose at AnthroCon 2008, photo by www.dragonscales.com (other great professional fursuit photos there too!)