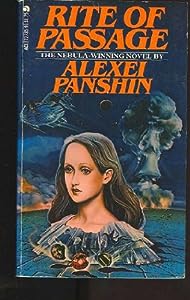 Cover of Rite of Passage

I do dig Sci-Fi (or, SF, if you’re particularly hardcore in a way I’m typically not), but one of the things I find interesting in an unsettling way is the way the cover art for the books — even in cases where it appears the artist actually HAS read the book — tends to (and I hate this pun) white-wash race. It’s very strange.

A couple examples I can think of, off the top of my head; Alexei Panshin‘s novel Rite of Passage and Spider Robinson‘s The Lifehouse Trilogy. For the former, I’ve seen two different covers for it in the flesh — and Amazon shows another two. Of the four, 3 feature the main character — kinda. (The fourth

just features a ship landing.) This is the most recent edition

, this is the cover of my copy

, and here, via LibraryThing is a collection of covers — this is the edition my sixth-grade English teacher had (the woman responsible for turning me on to the book). If you haven’t read the book, the protagonist is directly referred to as being black; yet, none of these depicted show a black woman. The sixth-grade teacher one comes the closest by having a blue woman… with decidedly caucasian features. The version that I have is a bit over-the-top; she’s pale and blond (and, if you look closely, has erect nipples; ah, the classiness of Sci-Fi publishers of the ’70s). Even the most current version, while a very good painting and not sexed-up, features a brunette, white woman. In fact, looking through the various editions at the Library Thing link, the first edition is the only cover that features a woman with negroid features… by which I mean, she’s kind of dark-skinned…. being that she’s painted to look as if she’s carved from stone. Feature-wise, she has the soft features of a young child; the stylization of the artwork makes it hard to tell a particular race, though she looks caucasoid to me as well.

, depicting a scene from the second novel, Time Pressure. There’re enough subtle touches (for, example, the moose-shaped glue dispenser that starts the events of the book in motion) that make me think the artist did read the source — but one big one. In the book, Rachel (the woman in the bubble), is described as incredibly beautiful and without hair when she’s found; both of those are there — as is the gold crown she’s wearing. However — she’s pretty clearly white, when in the book, a pretty big point is made that Rachel’s appearance is a melange of ALL the races — and, as you’d expect, that means she’s rather dark-skinned.

I’ve never seen a physical copy of the individual novel Time Pressure — and, sadly, this is the largest scan I can find, it doesn’t look like the original edition is much better. (Rachel looks slightly duskier than on the Trilogy cover, but not really as dark as she’s made to sound in the novel; and I can’t see the crown, either, which makes me think this was just a case of the publisher saying “Paint a naked bald lady in a bubble.”)

To be fair, I’m not knocking the artwork in most of these cases — as paintings, most are good (probably the only exception in my eyes is the Pale-Blond Rite of Passage I’ve got — that one just looks half-assed and goofy to me); but they’re not perhaps the best representations of the novels. And, also, I know that book covers fall in that weird gutter between Capital-A-Art and commercial art; some of the covers are quite successful in the former (I do like that first edition of Rite). But, with commercial art, which these fundamentally ARE, the purpose is to shift units — and one of the time-honored traditions is using sex. But isn’t it odd, that, apparently the best way to sell sex is to use white women exclusively?

Admittedly, it’s not a surprise; the mainstream culture has long put white people first — since the sixties there’s been a slow increase in other faces, but even today it often smacks of tokenism — but in Sci-Fi’s case, it’s a little odd, particularly given that one of the authors is Spider Robinson. After all — in my own anecdotal evidence, SF fans are typically nerds, and nerds are often not as hung up on race/orientation/etc. as mainstream culture is, and, well, that’s one of the thrusts of Spider’s fiction — that SF fans are cool and open to pretty much everything and everyone. One of his most popular series, the Callahan’s Crosstime Saloon books, makes it a core value — everyone is judged by their hearts, because if they were judged by their looks or other characteristics, they’d lose out on a lot of really cool friends — like attempted robbers, talking dogs, robot aliens, friendly alcoholic vampires or a sentient Internet. Even in the novels in the Trilogy, this comes up — in Time Pressure, Rachel happens upon a couple folks who do double time as SF fans AND hippies — and both of which are open to different folks… but, then again, so do the more conservative Nova Scotian locals. If I were to sum up the whole of Spider’s oeuvre in one sentence, it’d be “Hey, love is pretty rad and you should give it a try.” And with Rite of Passage so little is made of race in the book that it’s implied that people have grown past that particular type of prejudice (though, prejudice isn’t completely eradicated; it’s now between the people who live on the ship and the people who live on the planet it orbits).

Yet, it seems odd that such progressive books — particularly in the area of race — would have regressive covers; even regressive MODERN covers. While Time Pressure came out originally in 1988, the omnibus edition came out in 2007. And while Rite of Passage came out in ’68, it’s a classic that has remained in print — and as I pointed out, remained in print perennially with the same issue. Why is this the case? Are Spider and I wrong? Are SF fans so weirded out by race that if, all of a sudden, the in print edition of Rite of Passage had a black woman on the cover, sales would drop through the floor? If, in Time Pressure, Rachel’s race-or-lack-thereof (does race really exist in a world where all races have merged?) weren’t a secret only encoded in the text between the pages, would the book become lost?

While I suppose a lot of the issue is that artists don’t have time to read all the novels they have to paint covers for (though in both Trilogy‘s case where it looks like the artist did, and in Rite of Passage‘s case where it’s such an established SF classic that it’d be hard to think that someone interested in SF to the degree of working in that field hadn’t read it), you’d think that there’d be better synopses given to the artists that might mention something like that — or, at the very least, that the artist’s default wouldn’t be exclusively white women.

And, in case you’re wondering — both Rite of Passage and The Lifehouse Trilogy are outstanding books, and I do recommend the contents highly. Check ’em out!