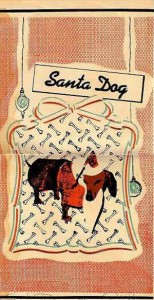 With the breadth and width of The Residents discography, and the limited focus of The Residents Project, some stuff is going to fall through the cracks. These supplemental pieces are here to mop up and put things to rights. We begin with the earliest piece of official Residential music, “Santa Dog”, and its many offspring.

“Fire,” however, is the song that The Residents keep returning to. Its bizarre refrain of “Santa Dog’s a Jesus fetus,” has become a Residents trademark, and it’s this song that the band’s recorded over and over again. This original version is a strangely compelling one, and in my opinion, the best. Like many of the early Residents tracks, not a lot of what they would be known for is here, save for the odd sounds and arrangements. Even the singer’s voice is different. Still, no examination of The early Residents is complete without giving it a listen.

By 1978, The Residents had changed their sound so much that they decided to re-record “Fire” in their current style. It’s very much what you would get if you took a typical track from Duck Stab! and combined it with “Fire”. The Signing Resident is a little extra-nasal on this, but it works. The B-side of this was the original, ’72 version of “Fire” mastered at a slightly higher speed, so if you didn’t think the original vocals were quite high enough, you can get them higher here.

Really, I should probably save this one for later. It wasn’t released until 1988 as a B-Side to “Santa Dog ’88”, and even then it was unfinished. The Residents thought it would be a good idea to redo “Santa Dog” every seven years, but while working on this version, they decided they hadn’t progressed enough, sonically, and put it aside. It’s catching The Residents right on their transition from synthesizer music to computer music, and the track is quite haunting in its spareness. They did, eventually, come back to finish this version, but that’s for another section.

1988 was a big year for The Residents, with the landmark God in Three Persons album. Beginning with the melody of “Auld Lang Syne,” “Santa Dog ’88” goes into a mostly spoken version of the song with a wonderfully creepy musical backing that anyone who enjoys the music from God in Three Persons will appreciate. It’s far from my favorite of the Santa Dogs, but it is one of the better iterations the Residents did over the years. Of course, it may just be the God in Three Persons halo that surrounds the track. I do love that album.

Santa Dog ’92 (Where Are Your Dogs? Show Us Your Ugly)

Ugh. This is… unpleasant. A seemingly endless, thirteen minute extension of the “Santa Dog” concept that attempts to give the titular “Santa Dog” some backstory. It turns into a very heavy anti-vivisection and animal experimentation rant that is totally out of character for The Residents. It’s not fun, it’s not pleasant, and the vocal effect used on The Singing Resident is almost annoying enough to make the sound of whining puppies on the recording sound pleasant. I am not joking about this. Skip it.

Not being ones to skip a good millenial cash-in, The Residents went back and took all the versions of “Santa Dog” to date, and tossed them on a CD with a newly recorded version along with a few new songs that play with the themes from “Santa Dog”: “Flood,” “Famine,” “Plague,” and “Pestilence.” (The latter of these steals some lyrics from “Aircraft Damage.”) Aside from the new version of “Santa Dog” which isn’t terribly good, there’s a live version of “Santa Dog” from The Residents Cube-E tour that until this had only seen release on the Fan Club only Liver Music album. Oh, and they also had Molly Harvey provide some vocals on the unfinished “Santa Dog ’84” and give that a spit shine. All the other “Santa Dogs” get a nice remastering job, and that really make this worth tracking down if you’re a “Santa Dog” fan.

“Santa Dog ’99” itself is a huge improvement over its predecessor. It’s overlong, clocking in nearly ten minutes, but it’s a much more compelling listen. The majority of the song consists of a number of variations on the “Santa Dog” musical theme, in varying styles that really show the range The Residents had developed in the previous twenty-seven years. While I’d prefer cohesion, I’ll take ’99s piece-meal approach to the material to the oppressive misery of ’92 any day.

A word on the subtitle: the original Santa Dog 7-inches were not sold, but instead mailed to various parties, including Richard Nixon at the White House. His copy came back, labelled “Refused.” They also mailed a copy to Frank Zappa, which came back because he had moved.

First thing’s first, this one’s back to regular song length. After the excesses of “Santa Dog ’92” and “Santa Dog ’99,” this is a huge relief. The newest of the Santa Dogs begins with a chopped up sample of the original recording over a repeating pair of guitar chords, which pops up throughout. The meat of the song is a farily straightforward intepretation with some deep, house beats that reflect with the more electronic direction the band took during the 00s. If you dig that period, you’ll dig this.

We’re getting to be about due for another version of “Santa Dog,” and with the changes in The Residents sound that they’ve undergone lately, I’m sure this will be a doozy.