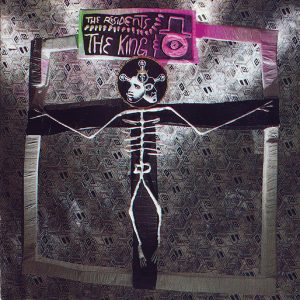 Here’s the deal. This is an album of Elvis Presley covers. It’s a studio version of act three of The Residents’ Cube-E project, which we’ll discuss another week. Interspersed between the songs are spoken pieces wherein The Singing Resident tells the story of “The Baby King” to a pair of children. The Baby King wants to be a king because “kings are good, and kings are strong, and kings are the best of everything.” A man finds the Baby King and promises to make him a king. And the Baby King eventually falls, as he’s really only the “king of need.”

It starts out okay enough with a version of “Blue Suede Shoes” that goes screaming off the rails when the chorus of shrieking female backing vocalists (Well, Laurie Amat multi-tracked) kicks in. The music itself is pretty dire too. The majority of it is late–80s Macintosh MIDI preset sounds. Even the guitar sounds like a crappy MIDI sample. What makes this all the more dire is that, unlike God in Three Persons, which augmented the MIDI with live instrumentation, there are barely any live instruments on this at all. The end result is something that sounds utterly sterile, heartless, dull, and tedious. Even the vocals are awful, and this is coming from a fan of The Singing Resident’s voice. I can only imagine Aila trying to poke out her eardrums in frustration. Making this worse, is that The Residents had already covered “Jailhouse Rock” and it was amazing. How the mighty fall…

Oh, man, and it goes on. There’s just under an hour of this nonsense, seven devoted to the “Baby King” story. The best part of the album, but by no means a good part is the penultimate cover, “Love Me Tender,” which samples a live audience as The Baby King/Elvis is overcome by samples of British Invasion music. One sample is The Beatles’ cover of “Blue Suede Shoes,” which Resident/Elvis performed at the start of the album. Poetic? Yes. Listenable? Barely. Honestly, if you’re curious about a Residential take on Elvis, go get the Cube-E: Live in Holland album, and save this for later. The abbreviated set on that disc is much more tolerable, and something about the live setting makes the cheesy MIDI sounds have a little more depth. On its own, in the sterile operating chamber of The Residents recording studio, The King & Eye just fails to thrive.

Oh, and I suppose I need to talk about The King & Eye RMX, don’t I. Someone named Paralyzer took the original multi-tracks and samples from The King & Eye and assembled a new album of Elvis covers, including some that weren’t on this album. It sounds like fairly generic early–00s house music with Residential vocals thrown over top of them, and occasionally tweaked. Skip it. And skip the original too.

Rev. Syung Myung Me:  It’s really shocking that this one came right after God in Three Persons.  It’s like every step forward that God made, The King & Eye takes double backward.  That said, it’s not bad like George and James was bad — it’s just… well, completely forgettable.  Utterly so.  I mean that in a literal fashion — a lot of times I forget that this album EXISTS.  If Rich hadn’t asked if King was next, I probably wouldn’t have remembered what was next.  I think I probably woulda said Freak Show, honestly.  Maybe Cube-E — which IS next if we do that one, since we’ve been mainly skipping the live albums and such — but honestly, I figure Cube-E has a better claim at being a “real” album than King & Eye does.  Buckaroo Blues does too, and that was a fanclub-only release.

The one interesting thing about King & Eye (aside from its cover art by Rex Ray, which I legitimately do like) is the concept behind the recording; the Residents realized they’d never recorded in a real studio before, so they actually booked time in a studio, and then realized that as they were paying a bunch of money for it, they’d have to actually bash it out as quickly as possible instead of going back and spending a bunch of time on it like they usually do.  The idea in trying something new I can totally get behind.  The album that resulted… not so much.

I think that’s the thing with this one is less that it’s bad — it’s just boring.  I like the Baby King stories some but that’s about it.  It really seems that the Residents worked out the story behind it and then realized they had to make a bunch of covers to back it up once they recorded the Baby King bits and maybe “Love Me Tender” and “Blue Suede Shoes”.

There’s a b-side only track, a cover of “Don’t” that wasn’t on the album, but… well, honestly?  Who cares?

As for The King & Eye RMX — it’s better and I listen to that slightly more often than the real album, but it’s still not exactly essential.  The songs sound a lot fuller, and it’s also way, way shorter than the original.  Both of those are definite improvements.

I think King & Eye is out of print.  This is no loss.  Hopefully used copies aren’t expensive.  I’d hate for someone to pay a bunch of money for this.

Aila:  The King & Eye sucks. It’s pretty much everything I hate about The Residents, in an Elvis covers-album format.  It is one of the ones I’d heard previously, and to be honest I didn’t re-listen to it, even though I should have for this review.  I know it’s awful.  I doubt it’s improved.  I don’t have time to listen to a record I already know I’m going to hate.  So yes, this isn’t really a review on my part (basically, I’m opting out of this one, but thought I should write something anyway).  I’m pretty certain it’s one for the trash bin never the less, but I have to defer to Matt and Richard for the actual analysis.