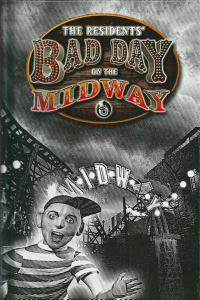 In case you don’t remember, we didn’t really care much for Have A Bad Day, the soundtrack CD to the Residents‘ CD-ROM game Bad Day on the Midway.  And it didn’t help that of the three of us, none had actually played the game the music came from.  In fact, I’m not sure if we COULD play the game even if we had a copy of it, given how computers advanced and whatnot.  The Bad Day project couldn’t die, however.  After at least three attempts to turn it into a TV series (including one attempt by David Lynch of all people), the Residents — or rather the singing Resident, Randy Rose — turned the storyline of the game into a short novel.

The novel is an entertaining, pulpy read.  It’s clear that Rose isn’t usually a prose writer; some of the prose can be a little odd, as it’s clearly designed to be read aloud.  The alliteration and turns of phrase look a little odd and distracting on the page — but if you can hear him saying it in his voice, the phrasing makes sense.  In that way, reading the book is nice; if you’re like me, you have your own little singing Resident in your head telling you a story.

It’s a quick read — only 160 pages with pictures — but there’s a lot going on.  The brevity sometimes makes the book read like a walkthrough of the game — the things you’d have to hit if you wanted to beat it — though I’d be kind of curious to compare the book to the actual walkthrough that was published.  I’d assume it reads a lot better, considering Rose doesn’t have to worry about shoehorning “now click on this…” in.  Still, it’s a fun read and a clever story about the worst day possible at a kind of horrifying, sleazy carnival midway.  The different storythreads dovetail quite nicely — perhaps a bit too much in a “Oh, THAT’S how you’d win!” way, but again — I read this knowing it was based on a game. I’d be interested to hear from someone who didn’t.

In terms of the Residents’ books, it’s not quite as good as the Freak Show comic — though, too, that was a series of vignettes by some of my favorite cartoonists (Brian Bolland, Richard Sala, Kyle Baker to name a few), and I AM a comics nerd, so I’m probably pretty pre-disposed to like that one anyway.  Still, it’s definitely an enjoyable read, and given how good the Residents tend to be at storytelling, I wouldn’t mind future books by Rose, either based on other albums and projects or original.  (Though if he’s going to the earlier well, perhaps now’s the time to explore the world of I Murdered Mommy!, the abandoned follow-up to Bad Day on the Midway.)

The book also comes with a CD, Bad Day on the Midway Reconsidered, and it’s new performances and arrangements of the songs on Have a Bad Day, and I must say that it’s quite a bit better than that original album.  It’s much more organic sounding, and the vocals are more like samples.  For example, the revisiting of “Lottie, The Human Log” is made infinitely less obnoxious (as Aila put it), by slowing down the vocal track and putting it in the background of the mix.  I probably still wouldn’t go to it much, but I’d definitely hear it more often than the original Have a Bad Day.

I think the initial run of books is sold out, though the introduction by the Cryptic Corporation seems to imply that they may re-issue it, perhaps as an eBook.  I’m thinking they didn’t make those Kindle references for nothing.