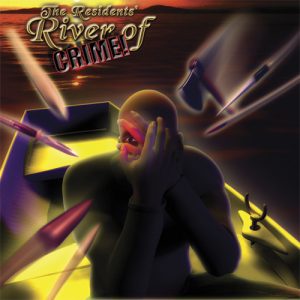 Richard J. Anderson:  The Residents refer to this particular period of albums in their discography as “The Storyteller Era.” Nowhere is this more appropriate than for The River of Crime!. Beginning life as a podcast, The River of Crime! is The Residents attempt at radio drama, producing roughly fifteen minute or so episodes of crime stories with a typically Residents bent, complete with soundtrack.

I’m going to come clean here. I’m cheating. This is the first Residents Project review where I didn’t finish listening to the album, just the first episode. Because I got bored. I didn’t finish listening to The King & Eye either, but that’s because it’s too painful. The River of Crime is just, well, there. I get that The Residents were trying to do storytelling and narrative in a musical framework. It’s succeeded before, with God in Three Persons and Tweedles!. It’ll succeed again on The Voice of Midnight and The Bunny Boy (spoilers!), but River of Crime! just falls flat for me. Maybe it’s the concept that doesn’t work, or that the music takes more of a backseat to the story-telling, but listening to River of Crime is not something I can do for very long.

However, I love how The Residents distributed the album: as a pair of CD-Rs with artwork and cases so that you could take the free downloads and burn them to CD. That way you had a professional, Porneauxgraphix designed thing to add to your collection of Residents stuff. It was a neat way to embrace Internet distribution and still offer a cool physical product. I’m surprised it hasn’t been done since. Shame the actual content is so… dull.

Rev. Syung Myung Me:  I’m kind of in the same boat as Rich.  I like the concept, but for whatever reason, the podcasts themselves aren’t great.  I ended up preferring to read the included scripts with the downloadable packages, mainly because I could read those at my own pace rather than waiting.

I do like that each episode came with a .zip package of a lot of bonus crap — artwork for each episode, instrumental versions of the podcast episodes, scripts, bonus tracks (including some live songs from the Icky Flix tour) and stuff like that.  The Residents can be pretty good about taking care of their fans.  It even included a teaser track from Tweedles! (…yeah, we’re doing this slightly out of order.  SORRY.)  It’s just that, for whatever reason, the stories weren’t that interesting.

If it hadn’t happened so long ago, I’d think of it as a dry run for Talking Light/Lonely Teenager, but well, hey, even the best storytellers have a few weak stories.  I wouldn’t mind if the Residents went back to the podcast format, but I have to admit that this particular project is kind of a write-off.  The Residents themselves don’t really seem to say a whole lot about River of Crime! on their website so I’m not even really sure what they think of it.  At least it didn’t scare them off from the storytelling format, even if this particular one just, well, didn’t work.

Aila:  I had a kind of strange experience with The River Of Crime! The first time I listened to the album, I accidentally heard the instrumental-only version. Normally this would seem like a positive for me, but strangely it wasn’t, even though I still didn’t find the vocals very pleasing. That said, this is still not a great record by any means.

The format of The River Of Crime! is that of a radio show. When I listened to the instrumental version, it seemed rather boring. With the exception of “Misdelivered Mummy!” and the last track “Termites From Formosa!”, it seemed mostly nondescript and uninspiring. Even those two tracks only had occasionally interesting moments. My main impression probably would have been reflected by a snarky comment about falling asleep had the instrumental version been the only one. Imagine my disappointment when I found out there was a ‘real’ version, with vocals and everything. Funnily enough, the vocals actually made the tracks make sense. As a radio show, these aren’t so bad. It’s not a radio show I’d normally listen to, but it would at least be somewhat cohesive. Most of the stories are kind of a bore, and the introductory monologue is easily the most annoying part (when the vocalist proclaims “I ride on a river of crime!”), but the radio show format actually kind of suits the band. I preferred this album (although it’s really more of a compilation of episodes than an album) more than the at least half dozen Residents albums which I found to be garbage. It’s probably better than at least a dozen Residents albums. But it’s still not a great album. The individual episodes are just too weak for it to be more than a curiosity. The format is a promising one for the band though, and I kind of wish they’d tried something like this earlier in their career. It feels like some of their previous failures might have been salvaged to some degree. As it is, this is pretty squarely in the middle of the pack in terms of Residents releases – which means I can’t say I exactly like it, but it’s not god awful.

The River Of Crime! is a stylistic break for The Residents, which is something they’ve desperately needed for years. Instead of the standard (and increasingly incomprehensible) ‘concept’ album, this radio show format has a way of reigning in the more obnoxious qualities of the group. It’s a shame the stories aren’t better, but all said it could much worse.