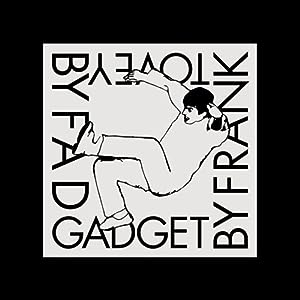 Most people are familiar with the light hearted, pop oriented synthpop songs from the early 1980s; “Don’t You Want Me” by the Human League (NOT the early, darker incarnation of the band) and pretty much any song by Thomas Dolby or Howard Jones spring to mind. These songs remain fodder for countless MOR 1980s radio stations across America to this day. However, the seamier, denser side of synthpop deserves recognition; these songs, while being less well known, sound inexplicably amazing in the summertime months while you are out cruising in your car or lying in the sun (well, to me, at least). Here’s my abbreviated list of the top five darkest synthpop songs – enjoy!

Fad Gadget (known also as Frank Tovey, folk singing city dweller and prophet) was an interesting blend of dangerous, often physically lethal performance art and synthpop tunes. “Back to Nature” was his debut single in 1979 on Mute Records. This song aurally describes life isolated in a geodesic dome (hey, IT ALL MAKES SENSE) and is propelled by oddly ghetto sounding drum machines and random keyboard bleeps, animal sounds, and squiggles. Fad Gadget also did another strange song called “Ricky’s Hand,” which focused on amputation, and “Lady Shave,” which described the pitfalls of one girl’s struggle with trichotillomania (otherwise known as an impulse control disorder which makes its victims pull their hair out uncontrollably). Phil Oakey he wasn’t.

This song has an upbeat but characteristically sleazy sound, and describes singer Marc Almond’s obsession with nightlife. The singer describes “going out to club land having fun” and “dancing, laughing, drinking, loving” while being “all alone in bedsit land.” The song’s narrator (presumably Almond himself) finds himself alone again (naturally!) in his flat. This song strangely enough was my soundtrack when I was recently housebound with a nasty case of recurrent bronchitis bordering on pneumonia. The darkness of this song – living in a broken-down flat while being alone yet surrounded by club influences – somehow fit my mood at the time. “Tainted Love” has garnered the most radio play by Soft Cell; however, they still manage to make Gloria Jones’ 1960s Northern Soul hit sound like a paean about sadomasochistic sex while taking MDMA.

This song, released in 1978 by the label Fast Product, is probably one of the greatest works of electronic music ever released; it was featured prominently on Rough Trade’s Electronic 01

compilation undoubtedly for this very reason. The song is driven by sparse, primitive electronics, and is pinned down by an unexpectedly funky bass line. Amazingly enough, Phil Oakey – the man associated with “Don’t You Want Me,” “Human,” and other poppy hits by the retooled Human League of the 1980s – shows up, and sings almost incomprehensible lyrics about “listen[ing] to the voice of Buddha / saying stop your sericulture.” This obviously was recorded before Phil discovered the two chicks who would later be prominently featured in the Human League and the fun of MDMA. This song’s b-side, called “Circus of Death,” is even more insane and perplexing.

This song from Buzzcocks frontman Pete Shelley was produced by Martin Rushent, known for his work with The Stranglers (he also produced the Human League’s ubiquitous 1981 album Dare

– apparently, all roads lead back to “Don’t You Want Me”!). The song sounds bright enough melodically – that is, until you listen to the lyrics. This song proved to be Pete Shelley’s musical “coming out” of sorts: “Homo-superior in my interior / But from the skin out I’m homosapien too.” Shelley’s rather stereotypically “gay” delivery of the song and its suggestive lyrical content were rewarded with a ban by BBC Radio 1. This song is, however, a fantastic, energetic dance floor filler and, in my estimation, is an absolute classic which deserves much recognition.

DAF, the progenitors of the movement called Neue Deutsche Welle (NDW), originally had a lineup which included a guitarist and a bassist, very much like a “traditional” rock band. By 1981, DAF were down to its core members, singer Gabi Delgado and drummer/programmer Robert Görl. They released an album called Alles Ist Gut which remains a dark synthpop classic. “Ich und die Wirklichkeit,” while harnessing a considerable amount of aggression and DAF’s characteristic dance floor energy, has a very claustrophobic feeling about it as Delgado rails about “feeling so strangely” and feeling completely dislocated from reality (auf Deutsch, of course). For more information about DAF, read my article in Popshifter about the NDW movement; I also had the opportunity to interview Robert Görl.