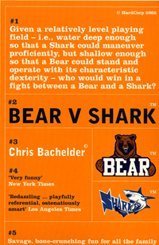 I read a lot. I enjoy reading, and I tend to find myself in situations where reading is about the best way to spend time. Since I read a lot, it should follow that I must also get a lot of books, which I do, typically from half.com, where I can often find prices in the $2 range, and risking two bucks on a book is way better than being out the $25 if I bought it at Barnes and Noble. Granted, I blow 2 bucks I could save if I were to go to the library, but I like owning books. Sorry.


A while ago, I paged through the Onion AVClub reviews to get ideas for decent books, since Amazon.com’s recommendation thing (which I was just using as a larf anyway) was totally useless, either giving me things by Authors I Like, And Therefore Have Bought Everything By (For example, I like Hunter S. Thompson. When I’m asking for a recommendation, I want something I might like if I like HST — not MORE HST. “Wait, you’re telling me if I liked Fear and Loathing, I might like Fear And Loathing ’72?!”) or Any Random Ass Comic Book because I’ve happened to get comics there. Usually fifty different volumes of the same series. (Note to Amazon: If I don’t want volumes 1-49 of a particular series of crap, I won’t want volume 50, either. Also, stop pimping Slander — why the FUCK would you think I’d want that? I mean, even discounting the fact that I’m not an illiterate retarded monkey, look at my history of book buyin’, which you’ve got access to!]. But yeah, also, just because I really, really dig Dan Clowes doesn’t mean I’ll like Jar-Head Superheroes Of The 24 1/2 Century. Oddly enough, not all comics are the same. Also, I fucking hate Lynda Barry. This is only tangentially related to the Not All Comics Are Interchangeable thing, but, well, I figure I need to say it anyway. Cause I really really really do. Man, her work just drives me up a damn wall.

Enough blathering — TO MY POINT. After finishing the 10 or so pages I had left of Lynch on Lynch (which I recommend if you can find a copy; I think it might actually have just gone out of print), I decided to read Bear V. Shark by Chris Bachelder. The Onion actually gave it a pretty good review of the Good, But Flawed, But Not Too Deeply, And Especially Good For A First Effort variety, and the premise (a lot of ruminations on the question “Who would win in a fight: A Bear or a Shark?”) sounded pretty interesting or at least amusing.

From my interpretation of the review, I thought it would be a collection of fictional essays in different styles, debating the “central” question of “Who Would Win In A Fight, A Bear Or A Shark” as if it was “Should we have prayer in school” or “Is abortion right or wrong?” or something like that. This is NOT what Bear V. Shark is. If it were what it was, then it might not have been so much utter pain to read.

What it is about: A Typical American Family ™ goes to Las Vegas to see Bear V. Shark 3 (Bachelder actually goes out of his way to clarify that it IS “Bear V. Shark”, and not “Bear Vs. Shark”, “Bear Versus Shark” or “Bear vs. Shark” or any other iteration on that you can think of). BvS3 is a fight between a Shark and a Bear, only it’s not actually a Real Shark and a Real Bear, but computer simulations of same. And there’s all sorts of media coverage and we’re becoming sheep from all the media. Occasionally media pundits show up to talk about who’d win in a fight, but it just doesn’t help.

I didn’t know that yet, so I spent the 2 bucks on a hardback book — one that had been remaindered from a public library. Which strikes me now that it should have been an omen, considering the thing just came out (I believe it came out in January 2003; I bought it in March).

The book strikes me as something that would come out Douglas Coupland if Coupland got lobotomized, then his rare late-in-life-triggering version of Trisomy 23 kicked in, and then he read A Heartbreaking Work Of Staggering Genius over and over and over again, and then decided to write a book. There’s definitely some Eggers-Influence in it, it’s just that while Eggers could do that sort of thing reasonably well, Bachelder so can’t. It reads like something that was originally written for McSweeneys, was rejected for being completely poorly done, and then lengthened into a novel to cash in on the whole Postmodern Craze The Kids Like.

I’ve talked a little about the “Weezer Effect” before, how in music videos from really bland, no-name punk bands they’ll have posters and memorabilia of other, much better bands in the background, where the hope is that you go “Oh, a Weezer poster! I like them! I must like This Band too!” and buy the no-name band’s crappy record. Apparently Bachelder’s been watching a lot of those, because he tries it out too. In Bear v. Shark, I actually kept a tally — he mentioned David Foster Wallace BY NAME 4 times, and Pynchon 5 times (god knows how many literary allusions he made to them). Sad thing, all it does is heighten that this is so not David Foster Wallace. Not even early, not-very-good DFW like The Broom of the System. Broom kicks Bear V. Shark‘s ass up and down and sideways again. And the namedropping was always so ingratiating. You could tell that he was name-dropping for credibility — “See, I’m a good author, because I know who David Foster Wallace is!”, which was obvious, since he swiped a couple things outright (very poorly, I might add…) from him.

Bachelder also kept actually QUOTING the late Neil Postman (author of Amusing Ourselves to Death among many other books and many other accomplishments; Amusing was Bachelder’s reference of choice, though) to make his “point” for him, OVER AND OVER AND OVER again, in case you’re TOO FUCKING STUPID to get it from his One-Note Harping from page 1. It’s not like Bear V. Shark‘s got layers or anything. It’s basically “HELLO WE’RE TOO SATURATED WITH MEDIA AND IT’S MAKING US SHEEP! DID YOU GET THAT? CAUSE I CAN SAY IT AGAIN, Y’KNOW, THAT THERE’S TOO MUCH MEDIA AND WE’RE SHEEP! YEP, WE’RE SHEEP, SO MUCH SHEEP! BY THE WAY, RIGHT NOW, I’M GOING TO PUT MYSELF IN THE ‘NOVEL’ RIGHT NOW, SO I CAN SAY THAT WE’RE SHEEP, AND YOU KNOW WHY? TOO MUCH MEDIA! YEP! THERE SURE IS A LOT OF MEDIA OUT THERE! A LOT OF IT! YEP! WHOO-BOY, IS THERE A LOT OF MEDIA, AND I DON’T THINK IT’S TOO GOOD FOR US TO HAVE SO MUCH MEDIA, CAUSE, Y’KNOW WHY? IT’S MAKING US SHEEP! YEP! SHEEP!”

Since we’re on the subject of borrowing things to do your work for you, apparently the Thrust of His Book was stolen from another book, The Predators, by Mark Washburn and Robert Webb (Stein and Day, 1984). [IMPORTANT NOTE: I have not read this book, although it appears from what I’ve rea
d about it, the whole thing of basing a satire around “who would win in a fight: a shark or a bear” fits this novel to a T, and other people who HAVE read both books have mentioned the connection. But if this turns out to be wrong, I do apologize for misrepresenting either novel.]. The sad thing is, where normally I would have wanted to read The Predators, Bear V. Shark was so goddawful I’ve got my doubts that anything that could have “inspired” it could be any good.

When reading Bear V. Shark it becomes obvious that there is no one person who loves Chris Bachelder more than Chris Bachelder. I am sure that on the day he decided to write BvS, he had it down to Showing The World How Brilliant And Clever He Is, or spending another day in front of the full length mirror physically displaying his deep, deep love for himself. Every single thing in the book is so overly cutesy and nauseating. It’s basically the literary equivalent of being locked in a room with a five-year-old hopping up and down shrieking “LOOK AT ME LOOK AT ME I’M SO CLEVER LOVE ME! LOVE ME! I’M SO SMART!”

As for the actual writing itself? Even if you can get past the acute case of self-adoration, the writing’s piss-poor. Bachelder has NO FLAIR for the English language, and it’s just utterly boring to read. He seems to think that he can confuse Gimmickry for Talent (each of the chapters are about 1-3 pages long, aside from one which is an Interview On TV With The Author, Describing The Action In The Book As A Play By Play, Which Is Really So Damned Clever, Don’t You Think?; he often uses short, clipped sentences; he often mixes characters’ thoughts into the prose as standard description; he comes up with Clever inventions to show that this is the Not-Too-Distant Future, etc). Even when David Foster Wallace isn’t really writing about anything for the most part, he at least makes the language interesting and beautiful and, thus, engaging.

In what was supposed to be a comedic book, I chuckled once at the “chapter” where it told History in “long story short” form, and at the end it had a list of other Long Story Short editions, including “Finite Jest”. Which is a stupid-as-fuck and predictable-as-all-hell joke, but I still sort of chucked in spite of myself. It’s not an original joke, or even a good one, though. But, yes, the basic gist of what I’m saying is that the only funny thing in a “humorous” novel was something stolen from every hacky review of A Heartbreaking Work of Staggering Genius (which is another book I do recommend, actually).

Originally, I was thinking about writing a short parody of the thing to show just how awful it is. I got derailed, and unfortunately, I don’t remember the style well enough to do one now. But, basically, combine Insipid Statements About Our Culture, with a new Chapter heading every couple lines. Also, keep referring to yourself in a way that makes sure the reader knows what a great and wonderful guy you are.

In case you haven’t noticed, this is the worst book I have read in my life.

Good things about it:
1) If you’re slow, you can read it in maybe 2 hours.

Bad things about it:
Everything else.

This book is so bad, it actually made me feel REALLY DEPRESSED for the rest of the night. I want my two dollars back. Not from the guy who sold it to me (taking money from libraries (or perhaps guys who give money to libraries, I’m not sure how it shakes out in this case) is bad) — from either God or Chris Bachelder. And if you ask him, I’m sure he’ll tell you they’re one and the same. I won’t be able to return the thing to him, though, I don’t have my copy anymore. It’s buried in an undisclosed location, wrapped in a sheath letting the inhabitants of the future know that it is not to be read, not because it’s a chilling vision of things to come, but that it’s an excruciatingly bad novel. (This isn’t hyperbole, by the way, this is true.)