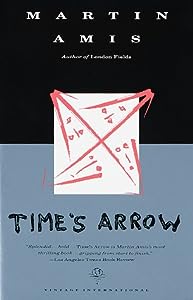 Martin Amis‘ Time’s Arrow is a pretty cool little novella. Or maybe it’s a novel, I don’t know. It’s either a long novella, or a really short novel. You can take your pick. It’s about 170 pages, at any rate, and it’s fictional. So take those two pieces of information and come to your own conclusion. I guess you can make your own mind up as to whether or not it’s pretty cool too, but if we do that, then there’s no reason for me to write this, or for anyone to write any review, but whatever — none of this is important. What is important: It’s a book, by Martin Amis, that goes backwards in time. And it’s not Counter-Clock World by Philip K. Dick, which is the one I typically think of when I hear of a book that moves backwards. There’re probably others, though.

So, anyway — the narrator of the book is, well, a question. He could be the main character’s conscience, or perhaps some sort of parasite, or maybe just a device to allow Amis to write in the first person. I’m not quite sold on the conscience theory. I like the idea of the narrator — he’s not given a name, but I’m gonna call him Jimmy — I like the idea of Jimmy being a parasite, but that’s not really borne out by the novel at all. In fact, the main character, Tod T. Friendly (yeah, I know…), is completely unaware of Jimmy, and Jimmy has no bearing on Tod at all — he just provides a running backward commentary.

He’s born with full command of English (as Tod’s brought back from the dead) — and he keeps that command as Tod goes through life and ends up back in the womb. So, Jimmy’s completely outside of time, other than it’s like he’s watching a movie. He has no access to Tod’s thoughts — except dreams, I guess, because they’re visual and Tod sees them, so Jimmy sees them, I guess.. Hm — do dreams actually trigger the visual cortex? Wikipedia doesn’t really say either way. Regardless, aside from dreams, Jimmy doesn’t have access to any thoughts — it’s like he’s watching Tod Being John Malkovich style, only I don’t think they had access to the dreams, either. Though that wasn’t ever brought up in the film so who knows. Get Kaufman on the line to ask him.

Actually, if there is a problem with the novel, it’s Jimmy. Aside from the dreams-but-not-thoughts stickiness, it’s a little annoying as sometimes Jimmy twigs to what’s going on in terms of things being backward — i.e. folks getting scraps of food from the trash to prepare for throwing up their dinner — and other times he’s totally baffled. Sometimes it works — like the bits with Irene, Tod’s love interest leaving messes for Tod to clean up — and othertimes, not so much — like most of anything with doctors, where Jimmy can’t seem to wrap his head around why doctors are well-thought of. The worst parts of these come off as Amis using Jimmy to say “OMG!! ISN’T THIS WAAAAACKY?!?!?!” — but the best parts require you to think.

Spoiler here — I knew this going in, and was why I read it, but apparently some folks get pissed if you mention it so FAIR WARNING — it turns out that Tod T. Friendly is a Nazi Doctor (as if, y’know, Tod T. Friendly as a name didn’t tip you off). And in the annoying bit, Jimmy seems to think this is just GRAND, as he sees Tod as SAVING the Jews! Ho Ho! While it’d be better if Jimmy weren’t so… Jimmy… it’s got a lot of great writing and it’s really creepy and ugly thinking about what’s going on. The book is a little too short to really go into much about why Tod’s this way, aside from a few moments where it’s spelled out that it’s his desire to fit in and obey orders (by, y’know, Jimmy saying that Tod’s desire seems to be to fit in and obey orders). Of course, this makes sense — as one ages, their perception of time goes by faster and faster — so in Jimmy’s youth (Tod’s twilight years), we get most every detail… but at the end of Jimmy’s life (Tod’s childhood), it just whips by. A cool device, but not necessarily the most satisfying for the reader.

Even if I sound like I’m somewhat down on this book — I’m not. It’s definitely worth reading, and it IS a quick read. It’s not a perfect book — but it’s a good way to kill an afternoon. Or make it come back to life. SEE WHAT I DID THERE?!?