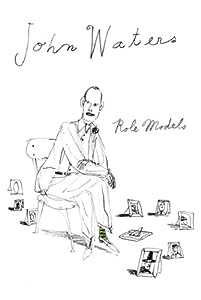 I’ve known people who don’t really like John Waters.  To those people, I can only play the “I accept your lifestyle choice, even if I believe it is wrong” card.  I just think he’s great — his films are delightfully trashy, but — and here’s the big thing — they’re WELL-MADE.  His writing, too, just speaks to me; his voice comes through with everything he’s written.  I suppose it’s a cliche about “he writes like people speak!”, but that’s OK, as it’s not quite true with John Waters.  He doesn’t write like PEOPLE speak, he writes like HE speaks; casual but erudite, with a wicked sense of humor that’s dark without really being mean.  For him, “freak” isn’t an insult — it’s just an apt description of some people.  Nothing’s wrong with it — and, honestly, a lot of times the freaks have it all over the “normals”.

His newest book of essays, Role Models, is a look at some of these freaks of all walks of life.  And, actually — in the case of, say, Johnny Mathis, they’re almost freaky by way of their extreme normalcy.  It’s a fun read — and really enlightening.  John Waters doesn’t seem to go in for the whole silliness with “guilty pleasures” — so you get artists like Johnny Mathis, Little Richard and Rei Kuwakabo sitting along side Baltimore’s lesbian stripper Zorro and “outsider pornographers” Bobby Garcia and David Hurles.  But all are treated with the utmost respect.  Sure, there’re some jokes about each of the people, but they’re never any more or worse than anyone else gets… or even Waters himself gets.

One of my favorite chapters was on Leslie Van Houten of the Manson Family.  I have to admit, one of the things that made me a bit uncomfortable in Waters’ earlier books Crackpot and Shock Value was his adoration of the Manson Family — one almost forgets in those books that they brutally tortured and murdered people.  In Leslie’s chapter — he apologizes for those chapters in his older books, and realizes they were just the youthful desire to shock and, above all, didn’t actually help anyone.  Befriending Leslie Van Houten helped him realize that, and the piece in Role Models is a mature and very well-written exploration of what Manson means and meant at the time — as well as the hell and brainwashing that Van Houten (and other Family members) went through… but he never loses sight of the hell the Family members put their victims through, either.  That said, he makes a compelling case for the parole of Van Houten — if incarceration is about redemption and rehabilitation, Leslie Van Houten’s made a very good case for herself.  Though, of course, she sympathizes with the LiBianca family who doesn’t want her out — which, of course makes sense as well.  It’s a very interesting chapter about trust and justice.

I also really liked the essays on Waters’ art collection (including folks like Cy Twombly, Mike Kelley, Richard Tuttle and Fischli/Weiss).  Waters is a known art collector and artist (look at his books Art: A Sex Book or Unwatchable for further proof), and he’s got a great talent for explaining why this art is important, what it means, what it is like and the reactions it creates without sounding condescending or pompous.  He’s excited and enthusiastic about this stuff, and it shows — and he doesn’t really care if you don’t get it… but if you don’t dismiss it out of hand, he’ll try his best to explain why it’s so good.

His chapter on books is also interesting — and I’ve got a new reading list.  I’d wanted to read We Need To Talk About Kevin by Lionel Shriver for quite some time, but Waters’ piece on it has moved that book up the list quite a way.  And other books I’d never heard of, like In Youth Is Pleasure by Denton Welch and Two Serious Ladies by Jane Bowles sound incredibly interesting…. Hell, even the books he mentions that don’t seem like they’d be right fits for me, like Darkness and Day by Ivy Compton-Burnett and Mary McCarthey’s The Man Who Loved Children still sound like they might still be worth picking up, even if I’d probably just as soon put them back down again.  I love the fact that Waters is so enthusiastic about the things he likes, and as a fellow book nerd, I can really relate to that enthusiasm about books.

Role Models is truly a great book — a quickish read, sure, but not everything has to be dense.  It’s also very tempting to do something lame and be all “After reading his book of his role models, it’s clear that John Waters is one of mine” or something, but honestly, he kinda was before-hand anyway, and I’d wager about half of all reviews of this book end in something similar, so let’s just drop it.