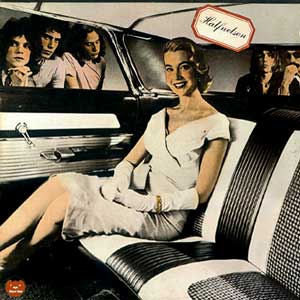 Rev. Syung Myung Me:  I always thought it was kinda weird that the first couple Sparks records are forgotten.  They never seem to get the credit the later ones did — it always seems that Kimono My House is considered the unofficial first record.  I can see that to some extent; the first two are much more straightforward rock, but there’re still classic Sparks songs on them, ones that aren’t very far removed from what they’d do later.

One of the weirdest things about the album is how it sounds; it’s a Todd Rundgren production, but it doesn’t sound very good.  Usually Rundgren is great — The Tubes’ Remote Control and XTC‘s Skylarking are classics, both from the sheer quality of the songs, but also from the sound of them.  It doesn’t sound terrible — but it’s not quite as good as Rundgren is typically capable of.  Perhaps this is why, though he is said to have discovered them, he never produced Sparks again.

Anyway — the thrust of my review was going to be about how the Sophomore Slump passed Sparks by, opting instead for a Freshman slump — and while I do prefer A Woofer In Tweeter’s Clothing, I forgot how many great songs are on this one.  “Wonder Girl” was a minor hit, “Roger” is on the more experimental side of Sparks and “Fletcher Honorama” and “(No More) Mister Nice Guys” sound like they could be on Kimono.  Aside from “Nice Guys”, the last track, the album loses steam, starting with “Biology 2”, one of the only Sparks songs not written by a Mael.  Earle Mankey‘s solo composition ends up being a little too jokey and not as clever as Sparks usually are.  It shares subject matter and a similar conceit to the later “Tryouts For The Human Race” (from No. 1 In Heaven), but is obvious where that song is brilliant and takes you a little while to figure out the twist.  The next track, “Saccharine For The War” by Russell Mael is another one that’s on the forgettable side.  “Big Bands” is better, and continues the ramp up into the outstanding “Nice Guys”.

While Sparks isn’t as good as what would follow, it’s definitely a record where you know to keep watching the band.  If I were buying this back in 1971, I doubt it’d be my new favorite record, but I’d still check on what they were doing and pick up their next record or two.

Aila: I recently watched a documentary which included a bit about Sparks, and mentioned that their band name, as originally suggested to them, was going to be “Sparks Brothers.”  I’m glad they didn’t go for that, as it’s not nearly as good as Sparks by itself.  However, either would have been better than their original name, Halfnelson, which was in effect when they recorded this first LP.  Names aside, I do think I tend to consider this first album (as well as the second) as almost being by a different band than later Sparks.  In fact, the band did have some different members after the first two records (the departure of the Mankey brothers being the most notable), but even at this early stage the Mael brothers were the creative force and only essential element of the band.  The real reason I probably think of the first records as “seperate” from the rest of Sparks’ catalogue is probably simply because I don’t listen to either of them nearly as often as later Sparks.  Which isn’t to say they are not worth listening to, but I do feel that Sparks is an extremely rare band (possibly unique) in that they’ve gotten better with almost every album, over the course of 40 years.  Does that mean I believe Sparks is their worst album and, for example, Interior Design is better than Kimono My House?  Of course not, but I do think their career follows that general trend, and this first record displays their considerable talent in its most embryonic state.

A few of the songs on here give hints at the creative briliance that was to come, for instance it would be difficult to find another track that sounded like “Roger” back then (or since, to be honest).  And “(No More) Mister Nice Guys” probably belongs in any collection of Sparks’ best songs.  “Wonder Girl” has an interesting melody and serves as a decent introduction to Russell Mael’s vocal style if nothing else.  But the bulk of the album is largely forgettable, in the context of Sparks’ larger career.  Still, I have a feeling that I would have been a big fan of this record if I’d been around to buy it when it came out, especially considering the rest of the musical landscape at the time.  So, overall, a reasonably enjoyable debut, but the best was yet to come…