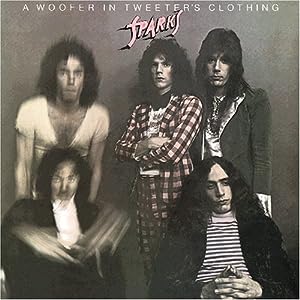 Cover of Woofer in Tweeter’s Clothing

Rev. Syung Myung Me:  A Woofer in Tweeter’s Clothing is one I think I go back to a bit more than the first record, though, still not one that I have in high rotation.  It definitely has its high moments — and occasional songs that I keep thinking were later — including their cover of “Do Re Mi”.  Unfortunately, though, like Sparks/Halfnelson, the sound is a little thin; I’m not sure if it is just the masters on the recent CD issues, or if they’re supposed to be that way.  I think perhaps that’s one reason the tracks didn’t break through as well — though, Warner Brothers‘ mishandling of the promotional aspects of the two Bearsville albums (as detailed in No. 1 Songs in Heaven) didn’t help either.

While these two albums sound a little thin and sparse, I have to say, Thaddeus James Lowe, the producer (and engineer of both of these first two) does get some great bass sounds.  Sadly, the vocals feel a little buried — as if he was worried about Russell overpowering the rest of the band.  If anything, the engineering is quite good — the indivdual instruments sound great, but the mixing doesn’t let them cohere into a nice, full sound.  “Moon Over Kentucky”, a fan favorite, tends to suffer from the production as well. Sparks would, especially later in their careers, be known for songs that have different, disparate sections and movements; “Moon Over Kentucky” is one of their first experiments with this, but due to the sparse, empty sound, the sections of the songs don’t really stick together, and it ends up sounding less “A Day In The Life” and more a live collage.

“Girl From Germany” is the lead cut and one of the minor, regional hit singles from the record, but the album really picks up speed with the second track, “Beaver O’Lindy”, which sounds a lot closer to later Sparks, despite being a more collaborative effort from the whole band — oddly, too, the full-band shouting “I’m sure we will appreciate our newfound leisure time!” is one of the only really memorable bits from “Nothing Is Sacred”.

“Here Comes Bob” gives us a little bit of a peek into the future, with its string quartet backing, which is something Sparks’d go back to, particularly on Indiscreet, which is one of my favorite Sparks albums.  “Angus Desire” likewise has echoes of Sparks’ later vocal experiments with layers upon layers of Russell’s voice.  “Underground” is another classic Sparks-sounding song — despite being Earle Mankey‘s composition, and a huge improvement over last record’s “Biology 2”.

“Whippings and Apologies”, the album closer, is, like Sparks/Halfnelson‘s “(No More) Mr. Nice Guys”, one of the strongest tracks and can easily stand up with any of Sparks’ best songs and doesn’t feel out of place with any of those, either.  The production really comes together on this cut — it feels full, complete, and just wonderful.  Honestly, this should have been the single from the album — and really pushed.  It could have been the cut that whet the world’s appetite for the breakout of “This Town Ain’t Big Enough For Both Of Us”.

While Woofer isn’t quite a perfect album — it’s definitely clear to see where Sparks were evolving to with this album.  Sparks are one of the few bands to avoid the sophomore slump with a really strong second album — though, like a lot of bands, their third album would be their first truly magnificent album.  Although – unlike a lot of bands, they’ve got a bunch more magnificent albums in them after Kimono My House… and they’re still making them.  Amazing.

Aila: The thing that really grabs my attention concerning the second Sparks album, A Woofer In Tweeter’s Clothing, is the increased use of string instrumentation.  It hasn’t yet become a dominant force in their music, but this certainly seems to be the point Ron Mael became enthralled with the strings, which would be used to varying degrees after this, and in dominant fashion in the later Sparks oeuvre (starting with Lil’ Beethoven), albeit in often much different styles. In terms of their entire career, the greatest significance of this album is probably it being the early beginnings of stylistic experimentation in Sparks music, something which would almost define the band over the next 30-odd years (although this isn’t a huge shift from the style of the previous record, other than the use of strings).

The songs themselves aren’t really an improvement from Sparks maiden effort, and for me there’s nothing as good as “(No More) Mr. Nice Guys” here, although the consistency throughout the album does seem a bit improved. “Do-Re-Mi” is mostly a showcase for Russell Mael’s versatile voice, although it’s a fairly interesting rock treatment of the song in its own right. The opener, “Girl From Germany,” is unique in that, in addition to being a fairly catchy pop song of high quality, I can’t think of another song which mentions the fine cuisine of Germany (a sentiment I agree with, although I’m probably in the minority).  “Beaver O’ Lindy” is a track which stands out a bit by utilizing a soft strings-based intro followed by a thundering rock song in the style of much of Sparks early 70s catalogue.  “Whippings and Apologies,” and the short piece which leads into it (“Batteries Not Included”), is a fittingly energetic and memorable end to the record.  Even the weakest songs on album (“Angus Desire” and the french-tinged “The Louvre” come to mind) have some memorable qualities, something which maybe can’t be said of the weak tracks on every Sparks album.  It does suffer from some unremarkable production, and Russell’s voice is difficult to decipher at times because of this, but there’s nothing really glaringly bad in my opinion.

Overall, it’s a solid effort, and a small step in the development of a band which was still yet to become great, although their next album would represent a much bigger step in that direction. It’s not one of the best Sparks records, but there’s certainly nothing disposable about it.  If anything, the relative weakness of this album is a testament to the quality of Sparks music after this point.