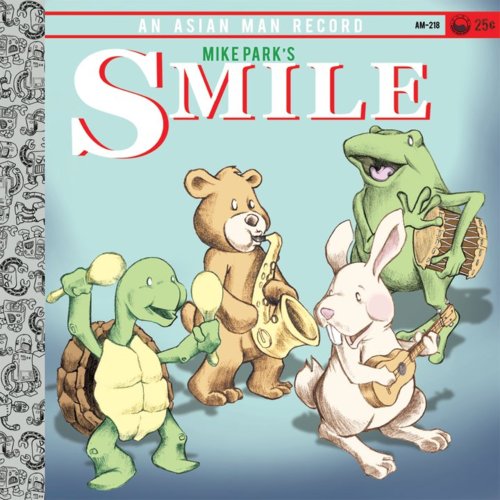 There’s a quote I particularly like from Neil Gaiman about writing children’s literature: “Making fiction for children, making books for children, isn’t something you do for money. It’s something you do because what children read and learn and see and take in changes them and forms them, and they make the future. They make the world we’re going to wind up in, the world that will be here when we’re gone.”

I think it’s fair to add making music for children to that list as well, and I feel like Mike Park‘s Smile, while far from a perfect kids’ album, is a collection of songs that definitely means to have a positive effect on anyone who listens, and hopes to inspire them a bit as they see and shape their world.

Not that any of this is surprising from Park, always one of the most positive and socially conscious voices in the ska-punk scene. You could share practically anything he’s put out over the years – on his own, with Skankin’ Pickle or The Bruce Lee Band or so on – with your kids pretty much worry-free, but it’s pretty awesome that he’s putting out music specifically for the next generation (and of course, being a father himself these days, he has his own stake in that generation) to enjoy and dance along with. He’s also planning to produce kid-friendly music from other bands as well, so this is more than just a one-off idea; this feels like a commitment to influencing the future.

As for the songs themselves, there are some very high points – particularly early (“Wiggly Wiggly Worm,” “Everybody Loves to Jump”) and late in the album (“Turn Off the Lights” and my favourite, “I Love to Play My Saxophone”). A few of the tunes were a bit too bland and mellow to catch my interest, but maybe your kids would be more forgiving.

All in all, it’s not a kids’ album quite up to the creative standards of, say, the They Might Be Giants albums directed at a similar age group – and unlike those albums, there are only one or two songs I’d find appealing enough to keep in the mix as an adult. But it’s a solid effort that I do think hits the mark with the appropriate age group, and it’s not going to drive you as crazy as another go-round with The Wiggles or Veggie Tales. That’s recommendation enough.