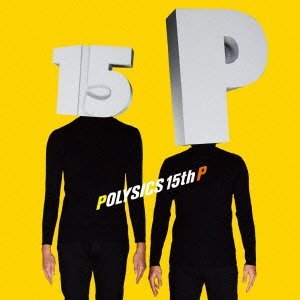 The first, and most important thing you need to know about POLYSICS new album, 15th P, is that it features a cover of the classic DEVO B-side, “Mecha-Mania Boy” with vocals by DEVO’s own Mark Mothersbaugh. Based on this alone, it is worth your time and money to at least get over to Amazon or iTunes and buy the album, or at least that track.

15th P is a celebration of all things POLYSICS, and their history—fifteen years, and fifteen albums and EPs. They even brought in a few collaborators, all of whom I’ve never heard of, save one, to do some new songs with. I’ll get to those, but I really have to talk about the song “Ariga Toisu!” which is a love letter to us obsessive fans. I’d like to compile a list of all the little references it makes to old songs, but I haven’t the time. There’s a ton of little references to the high points of the entire discography, and it all meshes together well. This says a lot about the POLYSICS formula of propulsive rhythms, buzz saw guitar, and chirpy synths that’s been their trademark from the start. When paired off with a freshly re-recorded version of the POLYSICS anthem “Buggie Technica”, it’s a killer double shot start to the disc.

If only the rest were quite as compelling. 15th P plays in much the same vein as their last disc, “Oh! No! It’s Heavy Polysick!!!,” and I found it to be their most disappointing album. This disappointment was even sadder after hearing the excellent “eee-P!!!” er… EP. The new formula is a lot of bleeping sequenced and arpeggiated synth lines over the core guitar, bass and drums. Unlike the days when Kayo was in the band, and playing live synth, the new approach really doesn’t lend itself to a lot of those great memorable hooks that are the hallmark of great POLYSICS tunes. Really, “Ariga Toisu!” provides a great comparison point, because all the little references to their early tunes are typically in the form of those amazing hooks.

Thankfully, the “Mecha-Mania Boy” cover lives up to the POLYSICS legacy. Hiro’s such a hardcore DEVO fan that, after “Ariga Toisu!,” this track probably got the most attention. Mark Mothersbaugh certainly isn’t half-assing it here. There’s long been mutual admiration between the two bands. Anyone who’s watched DEVO’s own Live in the Land of the Rising Sun DVD can tell you this. Allegedly, Mark used a POLYSICS album as hold music at Mutato Muzika. For these two forces to join up at last on a record is an amazing thing. The other standout among the collaborations is “783640” featuring Satoshi Mishiba, and some wonderful piano playing that gives the track a very old school POLYSICS feel.

So, 15th P. It’s not the most amazing album the band’s ever put out, but it contains two essential tracks for any hardcore POLYSICS fan. The rest of the stuff, well, I could take or leave. Maybe if you know who some of the featured artists are, you’ll be happy to have this album too. Thankfully, getting ahold of it shouldn’t be hard. It’s the first POLYSICS album to be released, albeit digitally, in the US at the same time as Japan. Along with it are digital versions of “Oh! No! It’s Heavy Polysick!!!,” “eee-P!!!,” greatest hits album “Bestoisu!!!!,” and the single “Electric Surfin’ Go Go”. Hopefully, this is a sign that POLYSICS are going to try to make another attempt at taking over American listener’s brains. I can’t say I have a problem with that.