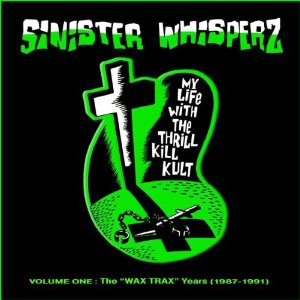 I’m a bit bummed that I only found out about the most recent My Life With The Thrill Kill Kult tour (with Lords of Acid!) via this awesome Popshifter review of their live show… a couple days after they played Seattle.  D’oh!  At least, though, I’ve got the next best thing — a copy of their new collection Sinister Whisperz: The Wax Trax! Years (1987-1991).  This isn’t merely a best-of, though it looks like that from the back cover… though the track selection doesn’t do anything to dissuade that notion.  Classics like “Do U Fear (For Your Child?)”, “A Daisy Chain 4 Satan” and “Kooler than Jesus” are all represented.  Don’t worry — it’s not one of those lame “Greatest Hits Re-recorded!” things either.

In fact, it’s a brand-new remix album of TKK’s early singles.  And the remixes are pretty good — the songs aren’t drastically changed or remixed, keeping this from working as a best-of for casual or new fans, but they’re different enough to be interesting for die-hards.   The main difference I hear in the remixes is that they’re a bit murkier and more atmospheric — a little bit less suited for the dance floor as the originals were… or at least, the dance floors of 1987-1991.  The remixes sound more modern but not at the expense of removing the things that made these songs classics in the first place.  The vocals don’t pop quite as much — meaning they probably wouldn’t pierce through the din of a club as well as the original mixes; but for listening at home, it works pretty well.

I do wish there was a bit more in terms of packaging; there’s no liner note booklet or anything — just a standard digipak with the bare minimum of information.  In fact, I had to research online to find out whether or not the remixes (named on the inside cover only, not the back cover) were taken from original 12” singles or were brand new.  The only hint on the sleeve is that Buzz McCoy is credited as having “Produced & Mixed” the album — but, again, nothing about when.  (Luckily, the band’s website came to the rescue.)  About the only bit of information aside from songwriting and publishing info is a key to what song originally came from what album — which is useful, particularly for new fans who want to know where to start.  (To be fair — there’s a limited  edition of the album that comes with in a box set with an extra live CD; I haven’t seen this version, so there’s a good chance it solves these problems.  The review copy I got is the single-disc version, which is the most common version.)

Still — I suppose in the age of digital distribution eclipsing physical media, I suppose complaining about packaging is a bit like complaining that the new roads don’t provide enough room for horse-and-buggies, but that’s just the way I am.  I like holding albums and looking at them while I listen.  So, feel free to discount that complaint if you’re not (as Frank Zappa called us) a record-fetishist like I am.

Overall – this is a good collection.  If you’re a new fan to TKK, I’d still recommend picking up the albums, but there’re quite a few out, and, well, that can get pricey.  So, if you don’t have a big pile of cash, this is a pretty good starter.  (Though, honestly, you’re just gonna go and get those records anyway, since they’re awesome.)  The good news though — if you’ve already got all those records, this is still worth getting… and not just for the one unreleased song from that era, “Satana Rising”.  The remixes are worth hearing, particularly if you’ve been listening to the originals over and over for a long time.   The remixes still have that perfect combination of grime, sleaze, hooks and grooves that make My Life With The Thrill Kill Kult such a great band.  If you’re not familiar with them at all — fix that right away, and this is a decent way to do that.