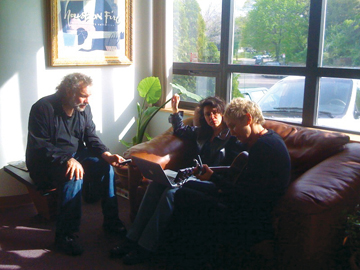 John Gorka.  Eliza Gilkyson.  Lucy Kaplansky.  Maybe you’ve never heard of any of these people, but you should check them out.  Each is a contemporary folk singer and songwriter in their own right and each has their own impressive catalogue.  Together, they have created something that is, in two words rarely heard together in relation to modern folk music, fucking amazing.

I’m not a guy you’d peg as a fan of folk music.  Seriously.  But let me tell you my five favorite bands.  In order:

How did this guy end up on here?  Let me tell you.  It’s all thanks to the internet.  I was surfing the interwebz one fine day in February of 2007 and I came across a song video that someone had made that put footage from the BBC miniseries of Neil Gaiman’s Neverwhere to a song I didn’t know.  That song was “Raven in the Storm” by John Gorka.  The video was well done but I was most struck by the song.  I found the song on iTunes and listened to the samples of the other songs on the album and immediately bought it.

I listened to the album, Land of the Bottom Line, pretty much nonstop for a few months.  The title song, to this day, is one of my absolute favorite songs of all time.

Last year I was lucky enough to finally see John Gorka perform live at the Freight and Salvage in Berkeley.  He performed with Lucy Kaplansky and I was blown away both by her and by him.  John Gorka’s stage presence is precious – he appears to fumble and stutter, he makes jokes that are so funny they put my dad to shame, and then he picks up his guitar or sits at the piano and this pure fucking magic happens.  His voice is beautiful and his songwriting skills are out of this world.

The collaboration I saw then between John Gorka and Lucy Kaplansky was also fucking awesome.  They’ve been singing together for almost as long as I’ve been alive (since 1984, I was born in ’82) and you can tell.  They sing beautiful harmonies for each other, they know each others songs and they create beautiful music together.

When I found out that Lucy and John were collaborating with another folksinger I was excited.  When my buddy Matt offered to send me the album to review it for Kittysneezes, I was ecstatic.  When I heard the album, I was overjoyed.

I’d never heard anything of Eliza Gilkyson‘s before, but I’m delighted to say that she is just as amazing as I would expect a friend and colleague of John and Lucy’s to be.  There was no doubt in my mind that the album was special.

But I knew that I couldn’t possibly sit down to accurately review the album until I had seen the trio perform together.  To that end, I eagerly bought tickets to see them perform tonight – again at the Freight and Salvage in Berkeley.  I should take a moment to tell you that the Freight used to be at Addison and San Pablo and has recently moved to Addison and Shattuck.  This places the establishment in the heart of downtown Berkeley, conveniently next to a parking garage, and right near a ton of amazing restaurants.  The building is amazing, very eco-friendly, very BERKELEY.  It’s classy and it’s awesome, the bathrooms are clean, the water fountain is nice, they have classy snacks and whatnot.  My only complaint is that they take your tickets and don’t give back the stubs.  I really wish that I had my ticket stubs (I do collect them).

The auditorium, like the members of Red Horse, is fucking amazing.  The accoustics are perfect, the chairs are fairly comfortable (insanely comfortable compared to the chairs at the old location), it’s open seating and I’ve been lucky enough to sit within the first three rows each time I’ve been.  Being so close to the performers is a real privilege and treat.

Now to the show and to the songs – the album consists of twelve tracks: each performer does one of their own songs, a cover of each of the other member’s songs, and a cover song of someone who is not in the trio.  On each song, the two who are not doing lead vocals provide harmony.  So you end up with a nice mix but all really awesome.

Eliza Gilkyson’s cover opens the album and they opened the show with the same: “I Am A Child” written by Neil Young.  A good tone-setter for the album and for the show.  She also performs her own song, “Walk Away From Love” which is, yes, fucking brilliant.  One of my personal favorites on the album.

Lucy Kaplansky’s performance of her own song, “Scorpion”, is upbeat and moving, it’s a really good song.  And her cover of Gilkyson’s “Sanctuary” is breathtaking.  But it’s her cover of one of my top three favorite John Gorka songs, “Blue Chalk”, that really fucking impressed me.  Seriously, this song is SUCH a favorite to me that the first time I heard her cover I felt like my body was rejecting an unwanted transplant.  I thought “NO THIS IS NOT THE SONG I KNOW” but then I listened to it a few more times and realized that it is the song that I know, it’s a great song, and her cover is awesome.  She adds her own inflections and makes it her own without losing the shit that makes the song so fucking brilliant.  Seeing her perform it live kicked ass.

Which brings me to JOHN GORKA.  You might have noticed I’m a huge fan.  I think my review of his show last year is up somewhere on KittySneezes.  I know it’s on my FaceBook.  This man can do no wrong (though there is one of his albums that I don’t have or listen to because it’s a little too country for me, but I’m sure if you’re really into that kind of thing you’d love it and I’m sure it’s also brilliant) and he does a lot of right both on the album and in his humor when he is performing.  My favorite track of his on the Red Horse album is his performance of his own song, “If These Walls Could Talk”.  Classic Gorka.

Seeing these three performers onstage together was an honor.  I really cannot stress enough how amazing they are both individually and together.

CHECK THIS SHIT OUT.

P.S. The night before seeing Red Horse in Berkeley, I took BART into San Francisco and saw the band Clutch at the Warfield.  Clutch is almost the opposite of Red Horse.  They do hard rock, sometimes considered metal.  I was actually wearing my Clutch shirt at the Red Horse show and I felt sorry for myself as it was almost as big a faux pas as the guy I saw at the Judas Priest show who was wearing a Tom Petty and the Heartbreakers shirt.  But then when I got home and I brought up ‘Red Horse’ on my iTunes I found out that Clutch has a song called ‘Red Horse Rainbow’.