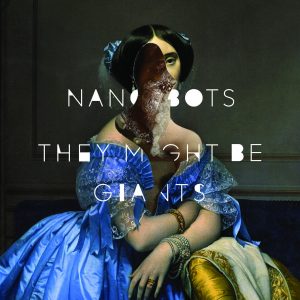 I am willing to make this declaration about Nanobots, They Might Be Giants’ newly-released 16th album: It is the one of the absolute best things they have done in the last 18 years. As someone who builds my life around this band, even I admit that a fair amount of their output in recent years has been underwhelming. But Nanobots can take its place alongside some of their best work.

I love that this album features accordion after several albums with it conspicuously absent, and also some fabulous bass clarinet action. I love that it crams 25 songs into 45 minutes, with nine of them being intriguing “jingles for impossible ideas” (as John Flansburgh put it) under a minute in length. Most of all, I love that this album is hands-down the weirdest thing TMBG has done in years. For the first time in a good long while, I can see when I listen to Nanobots that they are still the couple of weirdos who made their insane, brilliant self-titled debut in 1986. And I love it so much.

Nanobots starts off very strong–Linnell openers are almost invariably one of the standout tracks of the album and “You’re on Fire” is no exception. Over initially spare instrumentation that gradually crescendos, he sings to someone who “must’ve got one of them combustible heads.” Linnell doesn’t generally write songs that are so straightforward in their subject matter but he pulls it off well here. The casualness with which he delivers lines like “Is that your car they’re towing?/I’m pretty sure that’s your car” in combination with the idea of that he’s speaking to someone whose head is on fire is quite amusing.

It’s followed by another one of the best songs on the album, the titular track. On the surface “Nanobots” is simply about the stock idea of the robots we have created revolting and overthrowing us, but the song becomes tremendously more interesting when you take into account the fact that Linnell revealed it’s actually about the experience of being a parent. Once you’re aware of that it makes lines about wearing hand-me-downs and reading comic books make so much more sense, but it’s such a cleverly-handled conceit that it is not obvious on first listen.

After the uncharacteristically political “Black Ops” and the taking-a-metaphor-to-its-logical conclusion “Lost My Mind” comes the TOTALLY ROCKING Flans number “Circular Karate Chop,” which is his best song on the album. The story of a bully (I automatically assumed it was a guy, but my best friend has an interesting alternative take in which it’s a girl the narrator has a crush on), the song summarizes how such people can make one willing to submit (“I’ll shut my mouth, you do the talking”) but also simultaneously are rather pathetic (“You’re still bragging ’bout your telescoping roundhouse kick/You’re still looking for your Commodore’s old control stick”). The highlight of the song is the “Three rules from your sensei” bridge, which features such seemingly-deep-but-actually-meaningless advice as “Outsource your feelings.”

The brass-backed and hooky “Call You Mom” (which makes Vertigo-style creepiness even creepier by bringing an incest element into it, but somehow is the poppiest song on the album) is followed by “Tesla,” which takes its place on the shelf next to TMBG’s other biographical songs, “James K. Polk” and “Meet James Ensor.” Music-box-like instrumentation plays softly under Flansburgh’s equally low-key recitation of the scientist’s inventions and lonely death.

The first of the album’s microsongs, the 0:42 “Sleep,” is next, and it is the strongest of those. It is also the first major sign of the strange directions Nanobots heads in, with the lyrics punctuated by vocal weirdness.

Following this is the ABSOLUTE BEST song on the album, “Stone Cold Coup d’Etat.” Another revolution song from Linnell, it combines his pitch-black sensibilities with something he does not do often at all which is ROCKING THE FUCK OUT. This song is both one of his all-time classics and one of the most terrifying things he has ever written, which is quite an accomplishment for him.

Unfortunately, the album’s high point is followed by its low point, “Sometimes a Lonely Way.” While Linnell is all about combining heartbreaking lyrics with unreasonably upbeat melodies,which works so well, Flans here puts his over-the-top “SAD SAD SAD” lyrics over also “SAD SAD SAD” music, and it’s just not a combination I can stomach. But it’s the one weak point on an otherwise stellar album.

“9 Secret Steps” is a perfect example of Linnell doing a sad song the right way. Arpeggios that my friend has repeatedly described as “adorable” offset the truly soul-crushing lyrics. This song also prominently features the theme of “that old They Might Be Giants favorite: death,” which is always welcome.

Most of the microsongs are clustered next. While they could be read as undeveloped sketches, I enjoy that these songs just present the kernel of an idea without expanding it. There’s something very interesting about that. And, of course, it brings to mind the “Fingertips” project on Apollo 18.

The creepy-sci-fi-jazz “Replicant” is followed by “The Darlings of Lumberland,” another one of this album’s Flansburgh triumphs. This multi-layered song features a mellotron, a variety of woodwinds, and that beloved accordion and is among the most ambitious TMBG songs ever musically. This combined with the startling imagery of the lyrics make it one of the best songs on the album.

“Stuff is Way” is a song that cannot easily be understood and precisely because of this it is intriguing. The lyrics seem as if they were composed in an entirely haphazard manner, but my best friend has a theory that it has something to do with the Trojan horse. (It’s also her favorite song on the album for some reason, so she’s spent a lot of time thinking about it.)

Up next is “Icky” and, even though there are other songs on this album that are better, this is the song that makes me happiest. It’s a blast of surf rock that makes me feel like I should be twisting in a bikini. TMBG’s ability to seemingly effortlessly hop between wildly divergent genres will never cease to amaze me.

“Too Tall Girl” features another couple of interesting instrumentation choices (in this case vibraphone and contra-alto clarinet). Its musical sweetness and clever lyrics provide a fitting bridge between the cheerful “Icky” and the album’s closer, “Didn’t Kill Me,” which sounds exactly like something that would have ended up on TMBG’s beloved and dearly missed Dial-A-Song line, complete with tape hiss.

Although many of the songs are very short (aside from the microsongs, only three break the three-minute mark), Nanobots never feels like it is jumping around too much. It somehow manages to flow well even though there are so many songs, some of which are very different from each other stylistically, in such a short period. With the exception of “Sometimes a Lonely Way” every one of the 25 songs is at least reasonably good, and most are well above that. This album has truly renewed my faith in TMBG’s ability to be the single greatest band in existence, and I heartily recommend it.