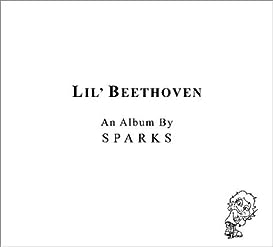 Rev. Syung Myung Me:  This is the album that made me GET Sparks.  (Actually, it was the Live in Stockholm DVD, but it was during the Lil’ Beethoven set, so close enough.)  Aila’s responsible for getting me into Sparks; I think I mentioned that earlier, but if not, there it is.  She’d been a Sparks fan for a really long time, and when a Sparks phase hit, that’s almost all we would listen to when we were driving around or whatnot.

I… didn’t get it.  The lyrics were funny, sure, but I couldn’t quite wrap my head around this high-singing, fake-operatic guy.  Why didn’t he sing like someone normal?  I did like that their keyboard guy looked like Hitler, since that’s kinda funny, too.  But otherwise?  If anything, it was just sort of annoying.   Lil’ Beethoven, the first few times, didn’t make sense to me, either — it was just a lot of repetition, like they wrote five lines and had to stretch it out to about five minutes.

Aila had just got the Stockholm DVD, and brought it over and said “OK — I wanna watch this, because I’ve not seen it.  And this is it — if you don’t like Sparks after this, I’ll stop playing ‘em all the time around you.”  (This is not a direct quote, but the gist.)  Sparks would join the list of embargoed artists alongside Kimya Dawson (mine; Aila loves her) and Half Japanese (hers, I love them).

So, she put it in — and the first few songs… yeah, I figured this was about it for Sparks.

And then… about half-way through the first set, “My Baby’s Taking Me Home”.

That song was perfect.  It was amazing the way it was put together out of a single sentence, a simple, repeating melody, and a recitation in the middle that was simultaneously beautiful and earnest AND ironic and jokey.

I GOT IT.  After that song, I listened intently to the rest of the DVD — and while that song was still my favorite, all of a sudden I LIKED the other songs I’d heard — songs I’d heard and dismissed countless times before.  It MADE SENSE.  I GOT why she adored this band.  I started REQUESTING Sparks albums when we were in the car together.  I started buying ‘em myself, with her help to guide me.  So that’s honestly, the genesis of this project.  Becoming a newbie Sparks FAN more-or-less overnight and not knowing quite where to start in their sea of twenty-plus albums.  And she steered me right.  And now I’ve got all of ‘em, and now we can share this love and knowledge with anyone else who might be in the same boat as I was.

So, yes — thank you, Aila — thank you for turning me on to one of the best bands in the world, and for sharing your knowledge with me and now anyone else who sees these.

Aila: Lil’ Beethoven is one of the most amazing records ever made by any band. It’s the most dramatic reinvention of Sparks yet, in terms of style, and an incredible achievement for any band, let alone one that had been making music for close to 30 years by this point.

When I first heard this album, it was honestly a bit of a shock, although in a really pleasant way. I’d probably already read a review or two which undoubtedly indicated Sparks were up to something ‘different,’ but I probably didn’t realize how dramatic that would be. It wouldn’t be far off to say the band managed to create a different genre with this album, if not for that fact that it seems impossible to imagine any band except for Sparks making music in this style. Heavy use of strings, repetition of sparse but effective lyrics, and a muted rhythm section all play a large part in the sound, but it’s something you really have to hear to fully appreciate. It’s probably not the best album to be used as an introduction to Sparks (although, as Matt has made clear above, sometimes it works). For the most part, it’s not what you’d be likely to describe as ‘accessible’ pop music. The songs themselves border on defying description as well, although there is a bit of variation in what is otherwise a very consistent album. “The Rhythm Thief” is probably a fitting title for the first song on the album, although it’s not entirely accurate to say the rhythm has left this music – it’s just utilized in a slightly unusual way. There are a few songs that almost sound conventional if you ‘squint your ears,’ as in the fairly rock and roll “Ugly Guys With Beautiful Girls,” and especially with the hilarious ‘show tuney’ closing number, “Suburban Homeboy.” However, most of the songs are built around a kind of hypnotic, rhythmic repetition of vocals augmented by a mostly orchestral background – “How Do I Get To Carnegie Hall?,” “My Baby’s Taking Me Home,” and “Your Call Is Very Important To Us. Please Hold” are all pretty amazing examples of this. There aren’t really any weak songs on this album, although I would say the strongest stuff is closer to the end of the record, for the most part. And there is certainly no lack of the usual eccentric Sparks humor to be heard here, “I Married Myself” stands out as one of the most hilariously bizarre songs the band have ever made in my opinion (the mental image of Russell Mael using a corny pickup line on himself alone would be worth it’s weight in gold, if ideas weighed much). Of course, one of the unique things about Sparks has always been their ability to be outrageously absurd in their lyrics at times without really veering into realm of the “novelty” song. That’s probably mostly down to the brilliantly original compositions and arrangements of Ron Mael, who I consider a musical genius to rival anyone in the history of pop music. This album is really the culmination of all the talents the Mael brothers had been developing over three decades. The fact that I’m not even absolutely certain I’d call this the best album they’ve ever made (although it’s certainly a contender) probably speaks volumes to how massive those talents are.

Ultimately, Lil’ Beethoven is an album that’s impossible to accurately describe in writing. There’s not really anything that you can compare it to, which is sort of necessary when attempting that kind of thing. It doesn’t ‘sound like’ any other band or artist. It doesn’t even sound like anything Sparks had done before this point. As I’ve said, it’s really one that you have to hear to understand. It’s also an album that grows on you the more times you listen to it. If you listen to it one time and it doesn’t completely blow you away, that’s understandable. If you listen to it half a dozen times and can’t find anything to like, you are probably not a Sparks fan. And honestly, your taste in music sucks.