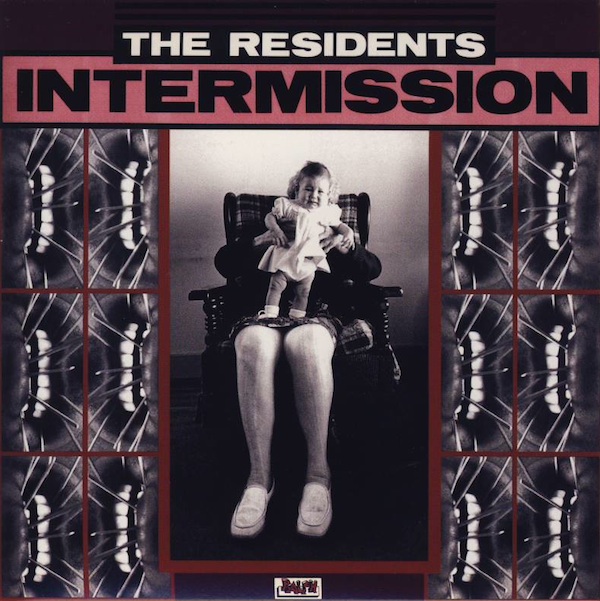 Richard J. Anderson: One thing I have to give The Residents credit for is that they to think of the whole live experience. I don’t just mean that they have visuals, sets, costumes, and a story or some other conceptual framework driving the show. They also go as far as to have, for many shows, introduction, intermission, and outro music. This leads us to Intermission, an EP consisting of those cuts from The Residents 1982 Mole Show tour—also their first real attempt at live performance. Largely, it’s a continuation of the Mark of the Mole sound, with lots of tribal drum machines, scary synths, and deep moods. It’s short enough that I can give each track its brief due, so let’s go.

“Lights Out” is the introduction music, and it sets an appropriately creepy atmosphere. It consists of thumping percussion, and a raw electric guitar piece laid over top of synthesizer pads and organ. Coming into a performance space with this on would easily put everyone in the right frame of mind for a Mole Show performance. “Shorty’s Lament” features a small chorus of female vocals trade off with the Singing Resident, telling the story of “Shorty,” whoever he is. It’s wonderfully creepy, though, and I would kill to get the accordion-like synthesizer patch that plays much of the lead. Meanwhile, “Moles are Coming” is almost a throwaway. Three minutes of chanting “moles are coming” by the female vocalists, and some church organ. At least it’s short and relevant to the show. As for outro cut, “The New Hymn,” well, it’s there, and suitably hymn-like, with lots of organ and vocals lifted from Mark of the Mole’s “Migration.”

My favorite, however, is “Would We Be Alive?,” which is also one of the first Residents cuts I ever heard. It’s a surprisingly sad, stark and slow cut, and stands out amidst the harshness and noise of the rest of the disc. Listening again, with a bit more Residents experience under my belt, I hear shadows of future works like God in Three Persons, and Demons Dance Alone in this track. Hear this one. It’s worth getting the EP for this alone, though some pressings of Mark of the Mole slap Intermission on as bonus tracks. It’s a solid companion to Mark of the Mole, especially if you like that album’s sound and want to hear something more song-based in the same vein.

Rev. Syung Myung Me: Intermission is pretty awesome — and the Residents are one of the few bands I know of who not only compose intermission music for their shows, but also release it — stuff like In Between Screams (from Wormwood).  Some of it is more “oh, that’s interesting” — stuff like In Between Screams — but Intermission is pretty keen.   “Would We Be Alive?” is definitely the stand-out track; I often end up forgetting it’s not on Mark of the Mole instead.  “Shorty’s Lament” is another one, though that one seems less explicitly Mole-related.  Still really good.  And, “The New Hymn”, while not my favorite track or anything is another that seems like it could be on Mark of the Mole (or maybe Tunes of Two Cities if it weren’t for the vocals) and kind of surprises me when I look at Mark and it’s not there.  (“Moles are Coming” is just sort of there.  I guess I could see it on Mark too, but as one of the suite openers or something that no one really thinks or talks about.  Same with “Lights Out”.  Both are good, but neither really… leap out?) 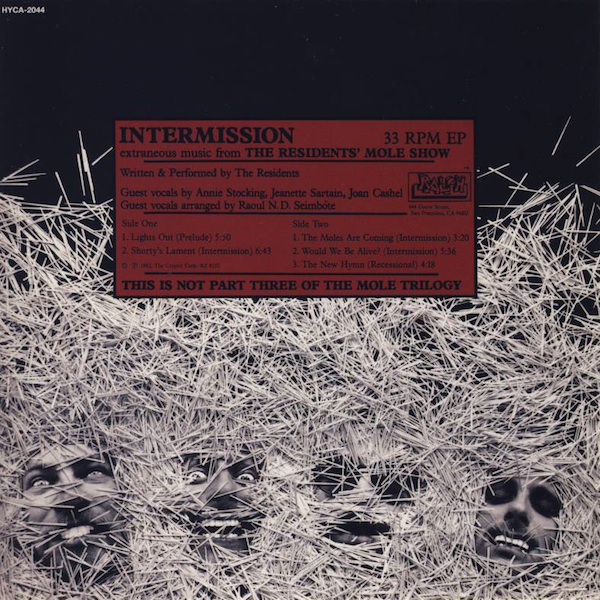 Finally, is it just me, or is the back cover of the album with the Residents’ faces unprotected in a huge pile of toothpicks kind of terrifying? I don’t want toothpicks right near my eyeballs!  (And I’m not making some lame joke about the masks.)

Aila: Intermission is billed as ‘not part 3 of The Mole Trilogy,’ but it seems to stay with the theme, at least as much as The Residents’ official ‘part 2,’ The Tunes Of Two Cities. As an album (or longish EP) the tone feels like it’s somewhere between Mark Of The Mole and The Tunes Of Two Cities, both in terms of content and quality. I guess this is due to the music being part of their live Mole Show (which I have yet to see/hear), but I have to admit I don’t really understand the distinction.

The opening track, “Lights Out (Prelude)” is a percussion-driven instrumental which is interesting but not really an essential piece of The Residents oeuvre. The second track, “Shorty’s Lament,” is a bit more in line with the rest of the record, with the exception of the flange-heavy percussion. The chant-y female vocal parts do stand out a bit, and are also used on later tracks. I didn’t think I’d heard any of this, but I immediately recognized the next track, “The Moles Are Coming,” as something I’d made use of as part of a project in a video production class about 15 years ago. It is probably the most striking track on the record, and as well as being the shortest, it is the most immediately gratifying. The next song, “Would We Be Alive?,” sounds like it could have come from many of the previous Residents records, if not for the crisper-than-usual production. The last track, “The New Hymn,” is basically more of the same musically, but in terms of lyrical content it could easily be part of The Mole Trilogy.

Honestly, I’m not really sure what to make of Intermission. It’s short, and it doesn’t really sound like a complete record (maybe it’s not intended to), but it does have some music that interestingly enjoyable in the typically oblique Residents manner. It makes me curious about the live Mole Show. In terms of The Mole Trilogy, I’m starting to get the feeling that the whole concept was a bit of a bait-and-switch, but that sort of makes sense for this band. Overall, I definitely wouldn’t say Intermission is an essential Residents record, but it isn’t bad by any means. It just feels a bit incomplete.