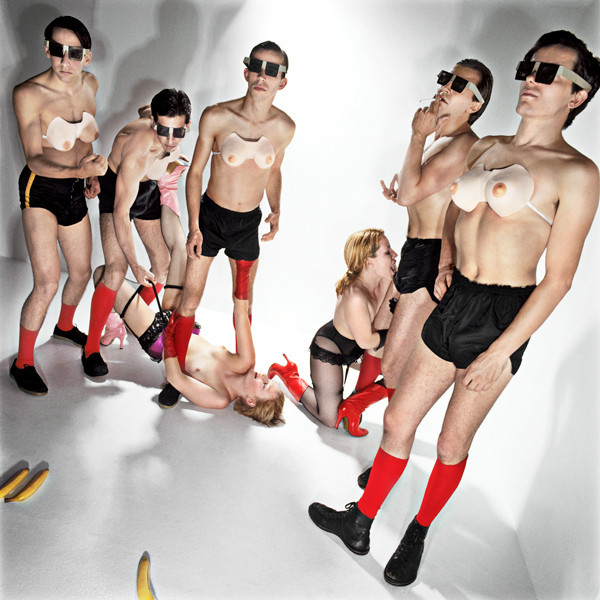 When you think about the band DEVO, odds are you think of those weird guys with the flowerpot hats, jerking around to synthesized robot pop music. Well, if you’re the sort who reads Kittysneezes regularly, you might not think that, but the ordinary people who may only know “Whip It” certainly think that way. It’s easy to assume that DEVO simply emerged out of nowhere, all stiff metronomic beats, synthesizers, and funny hats. Few are aware that DEVO began life as a satirical, performance art response to the Kent State shootings of May 4th, 1970, where four students were killed by the National Guard during a war protest.

DEVO was never terribly explicit in their satirical targets, but their targets were so numerous as to defy explicit reference. The origin of their name—the concept of de-evolution, that humankind was and is regressing into more primitive forms—covers the gamut. DEVO’s earliest musical works were designed to be divisive, abrasive, and often outright offensive. Hardcore DEVO, originally a two volume set of CDs released in DEVO’s twilight years of 1991, showcased the evolution of angry art students from proto-industrial noise to post-punk mavens over a four-year period from 1974 to 1977. A process that, by its culmination in DEVO’s first album in 1978, had brought them in sync with a de-evolving world that allowed them to take a dark, nihilistic message to a mass audience.

Six songs from Hardcore DEVO would be re-recorded and released on an unwitting public around Q: Are We Not Men? A: We Are DEVO!: “Jocko Homo”, “Mongoloid”, the stuttering cover of “(I Can’t Get No) Satisfaction” appearing on the album, with “Be Stiff” and “Social Fools” relegated to non-album singles. The Hardcore DEVO versions catch them, along with a handful of other larval songs that would see release—“Soo Bawlz”, “Workin’ in a Coal Mine”, “Clockout”, and “All of Us” (released as “Going Under” in 1981)—in a primitive state. They sound almost recognizable with discordant synthesizers and metronomic beats being staples of DEVO’s repertoire from the start. However, the real value in Hardcore DEVO is in the songs that never saw release until this collection.

Take, for example, “Mechanical Man,” a 1974 demo which leads off the first disc. It plays off as a more sinister version of Kraftwerk’s “The Robots” with plinking electronic drums and vocoded vocals. However, where Kraftwerk’s ode to mechanization was pleasant and even supportive: “We are programmed just to do / anything you want us to,” DEVO’s take is much more sinister: “Me feel swell, me work well / Me want what you want.” Even wilder is DEVO’s take on mechanization predates Kraftwerk’s by four years. Prescience abounds on Hardcore DEVO with songs depicting social ills such as the mock ode to greed “Dogs of Democracy,” or “Let’s Go” sinister football chant as it depicts an athlete brutally raping a co-ed.

The human condition and sex provide inspiration for many of the songs on Hardcore DEVO. Songs of lust like “I Need a Chick”, “The Rope Song”, “Goo Goo Itch,” and “Bottled Up”, are nestled alongside songs that seemingly eschew sex and love like “Space Girl Blues”, and “Baby Talkin’ Bitches” where a chorus claims that the men could “do without you for days” to an uninterested member of the female persuasion. Elsewhere, “37” is a heartfelt ode to the bliss of the ignorant (“I’m envious of your IQ of 37”). And these barely cover half of the two hours of pure de-evolved music that spans across the two disc set. We’re clearly a long way from “Whip It” here.

Uniting all of these songs, however, is the sound. Hardcore DEVO is industrial music before there was industrial music. It’s the sound of four, later five, frustrated and angry men in the midwest, with a message to the world, and an array of high and low-tech tools to make it happen. It’s a synthesis of dirty, down-home blues with high-minded George Jetson progressive rock and electronics. It’s songs designed to provoke audiences of drunk, unemployed rubber factory workers into riots. It’s the high and the low: big ideas and dumb ideas, mashed together like so many potatoes in the kitchens of unemployed factory workers in post-Industrial Ohio.

Hardcore DEVO is difficult. It’s dirty, it’s raw, it’s essential, and it’s been shamefully out of print for the better part of two decades. Now, re-released with four extra tracks on CD, Vinyl and digital download, the time is right for DEVOtees, young and old, who missed out, to sign on. You probably don’t any album that sounds like this, so get it. Stop, look, and listen. It’s D-E-V-O, from O-H-I-O. Follow your genetic imperative, and buy this album today. End of story.