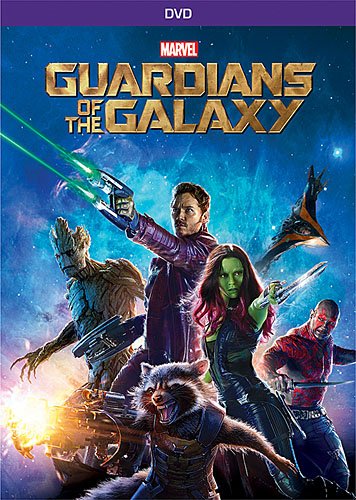 The fact Guardians of the Galaxy won me over is quite remarkable considering the attitude I started out with. I remember shaking my fist at the sky, full of feminist ire, as I proclaimed “How can they say Wonder Woman doesn’t have enough wide market appeal, then green light a movie about a cybernetic raccoon?” A dear friend of mine, and an expert in comic book nerddom, pointed out that one is DC and one is Marvel, and the rights are owned by different studios. I find that to be nearly irrelevant when I lump together all the “powers-that-be” into one man in a suit shaking his head “no.” But the fact of the matter is, my feminist ire was misplaced (but came in handy later on when protesting the very real lack of toys celebrating the kick-ass lady alien this movie made me care about).

The movie’s first charming quality is the soundtrack. The plot opens on the alien abduction of a kid in 1988, and he carries a sentimental Walkman throughout the film with a mix tape featuring 60s and 70s songs like B.J. Thomas “Hooked on a Feeling” and Redbone “Come and Get Your Love.” I wondered whether kids today know what a Walkman is, or a cassette tape, but I didn’t have any youths to interview at the time. The music also lends itself well to our first hero Star Lord (played by Chris Pratt) dancing at the most adorable times. He even throws in a dance off with the main villain near the end, as a brilliant diversionary tactic, despite the fact his opponent refuses to boogie down in return.

Our second and third heroes are a pair of bounty hunters hot on the trail of Star Lord: the cybernetic raccoon named Rocket (voiced by Bradley Cooper) and an anthropomorphic tree named Groot (voiced by Vin Diesel, amazingly enough). Imagining how these two must have paired up makes me wish a prequel would address such a topic. Rocket is homicidal with just enough personality to make you root for him. And speaking of roots, the gentle delivery of “I am Groot” every time that lovable tree speaks up makes you wish your grandpa could be a tree. Or maybe that’s just me.

Our fourth hero is the incredibly complicated Gamora (played by Zoe Saldana). She has turned her back on the evil villain, hoping to break free of him by making a bunch of cash off a black market sale. I have to give this film a lot of credit. Every time a different character (usually Star Lord) tries to pigeonhole her as a sex object, she rebels in the most delightful way imaginable. This makes her a much more dynamic part of the team, making equitable contributions left and right. Even the moments she starts looking like a damsel in distress that the boys (and raccoon and tree) must rescue, she flips those moments around, until the audience becomes convinced she had the situation under control all along. I kept waiting for Joss Whedon’s name to pop up in the credits to explain why Gamora was so awesome, but it turns out he wasn’t involved in any way. Nicole Perlman and James Gunn were the brilliant writers behind this film, and my hat’s off to them.

The four of them get in a tussle over a mysterious orb that Star Lord has stolen, landing them in jail. I was prepared to roll my eyes at the movie idea of these four becoming friends so rapidly after starting out as enemies, but the evolution of that friendship felt so organic that I suspended disbelief and bought it wholeheartedly. One suspects that Star Lord’s lusty feelings towards Gamora ease the friendly transition, and he confirms this hunch later on by moving in for a kiss, which ends with Gamora’s knife at his throat, yelling something about “pelvic sorcery!” Like you do.

While in jail, they meet a fifth hero named Dax the Destroyer (played by Dave Bautista), who has a suitably Inigo Montoya backstory of wanting to kill the villain that killed his family. He gets mixed up with everyone because Gamora’s former boss is the murderer in question, and Drax hopes that staying close to Gamora will lead to an vengeful reunion. Drax has this odd trait of taking everything literally, which I have literally never seen in a movie character before.

Halfway through the movie, our heroes discover the mysterious orb is bad news, and letting it fall into the hands of the powerful Ronan the Accuser (played by Lee Pace) would probably be the worst idea since Kirk Cameron. I realize Kirk Cameron is a person, rather than an idea, but allowing him to do all his crazy Kirk Cameron hijinks is a tragedy our entire nation should rise up to protest. But I digress.

I don’t want to spoil anything else about the plot, but rest assured that even when encountering a plot point that seemed obvious, I didn’t mind at all because those obvious moments where rare exceptions to a film so genuinely unique. I can say that the whole trope of “these heroes have flaws too” was really well executed, as you ended up relating to these flaws and wondering “How are these crazy kids (and raccoon and tree) gonna get out of this jam?” I just wanted to wrap this whole movie in a hug. And you will too. So just rent it already! And try to keep the money in your wallet from evaporating near the merchandise. We ALL want a tiny dancing Groot, and we all want it now.