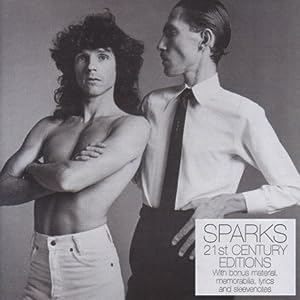 Chelsea: Just to get the ball rolling here, the Avedon photo that graces the cover of Big Beat was in a photography textbook I had in college, with no captions or context to identify it as an album cover.  When I saw it, I was convinced it was an ad for a high-priced gigolo service.

Rev. Syung Myung Me:  Huh, I can kinda see that.  Did you think Ron was the pimp, or a client?

Chelsea: Ron was the pimp, for sure.

As far as the album itself goes…this is my least favorite of the 1970s albums (with the exception of Terminal Jive, which I have yet to hear).  I lay the fault of this at the feet of Rupert Holmes.  I can see why the Maels would want to work with Rupert Holmes, and I can see why they’d want to make a punk album.  But who the hell thinks “Let’s make a punk album!  But who should produce it?  I know…the ‘Pina Colada’ guy!”

(In the interest of full disclosure, I actually think Holmes is kind of underrated.  His musical version of Drood is wonderful, and the man deserves a hearty golf clap for writing a song — the cannibalism ‘hit’ “Timothy” — with the express purpose of getting it banned and stirring controversy.  However, he wasn’t the producer this particular album needed.)

Rev. Syuung Myung Me: I’ve gotta agree with Chelsea here. Big Beat definitely had to grow on me, and while I like it now, I never really go “MAN! I gotta hear Big Beat!” I think for me, part of it was that it’s a bit of an angrier, more satirical album — songs like “Throw Her Away And Get A New One” and “White Women” are initially shocking — though, of course, it’s clear they’re making fun of the mentalities espoused by the narrators in those songs. Just the titles on the sleeve pop out and are a little disturbing, I guess. I think that’s one of the reasons I do tend to think of this album a little less is just my initial shock/distaste at seeing those song titles on the back of the sleeve. I realize that’s my own hang-up, but it’s there. (And, no, I’m not saying that no one should write songs like that — particularly ironic songs — I’m just saying sometimes shock value can cut both ways.)

Some of the songs are classics — like “Nothing To Do”, for example. That one just sounds like true Sparks to me, and I like it. Same with “Confusion”, written for a proposed collaboration between Sparks and Jacques Tati — which would have been really cool. This album just doesn’t quite click for me as a whole. The production just seems a little weird, flat and ill suited for Sparks — particularly if they were going for a more “punk” sound. (And, like Chelsea, I think Rupert Holmes is a pretty cool guy — just not a good match for the Maels.)

The bonus tracks on the “21st Century Edition” though, are pretty good: It includes their Discofied cover of “I Wanna Hold Your Hand” (originally intended as a Russell solo single, but that was nixed and it came out as Sparks) — a complete put on, but actually still really good. It sounds like it could be on a cheesy variety show — maybe Pink Lady & Jeff — but still, it works. “England”, recorded with original Sparks member Earle Mankey, is likewise really cool and has a real Sparks sound; perhaps a hint as to what would be with the combination of the Mael’s growth as songwriters and performers with the old sound — like if the Maels didn’t break up the band.

I guess the bottom line is: Don’t start with Big Beat. In fact, it can probably be one of the holes in your collection you fill later. It’s worth having, but, well, it’s not an essential. I honestly like Introducing better, and I think that’s most people’s most hated Sparks album.

Aila: Misguided. That’s the word that best describes Sparks’ sixth album, Big Beat. It’s clearly aimed squarely at a mainstream 70s rock audience, in the process removing most of the inventiveness and personality integral to the best Sparks records. Their album from a few years before this, Propaganda, also seemed to be targeted in such a way, but the material on that record was so strong that it turned out to be a fantastic album anyway. Big Beat pretty much fails on all terms, production or “style” concerns aside.

Which isn’t to say there is nothing worth listening to on this album. Even the worst Sparks album, which this probably isn’t (but it is close), contains a few really good songs. A few that come to mind here are “I Want To Be Like Everybody Else,” “Fill-Er-Up,” and “Screwed Up” – all of which are perfectly decent rock songs, but still not ones I think of as great Sparks tunes. However, there is one song on this that I do think of as a great Sparks song, and that is “Everybody’s Stupid.” In general it’s the same middle-of-the-road rock sound as the rest of the tracks, only a bit heavier in terms of the music, not to mention catchier, and with a typical Sparks sense of humor in the lyrics. If every song on this album were as good as this, it would have been a great record. Sadly, it is not.

I’m also going to have to disagree with the reviews above me, with regards to the suggestion this was intended as a “punk” record. I wish it were, as that might have actually been interesting. If it were made six months later than it was, it may well have been, but as it is this is pretty much just plain old boring 70s rock. “Hard” rock, yes – but punk, no. This was really one of the worst periods of Sparks music overall, although the next album is a little better than this one. Big Beat really didn’t do the band justice.