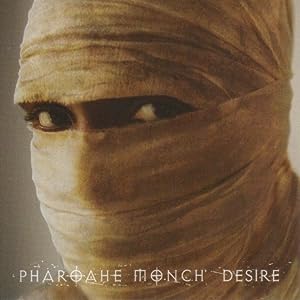 Pharoahe Monch should be a star. But he isn?t. If not a star than he should be a legend whose name is on the tip of any head?s tongue when discussing the best emcees to bless us with their dope flows. But he isn?t. In fact the only thing that Monch can claim is that he has done his damn thing for 15 years and with the release of his sophomore solo album he is ready to show why he will keep going for 15 more whether he gains the acclaim he deserves or not. Welcome to ?Desire.?

When the label heads over at Rawkus (the original) decided to go for gold (literally) with the release of a little single called ?Simon Says? by a forgotten emcee called Pharoahe Monch back in ?99 I don?t think they were prepared for the aftermath. What blew up in the clubs also blew up the courtrooms and before long the lead single that had brought with it promise of rap riches instead brought all involved heartache and pain. Lifting a sample from the Godzilla theme without paying the clearance fee ? and subsequently getting caught means you have to pay em out of what you?re making right? Nope! Pharoahe?s debut solo offering ?Internal Affairs? was pulled from the shelves never to be seen or heard from again (until the internet made everything digitally available ? the hard copy is still an elusive piece).

But that wasn?t the first time Monch watched label politics ruin his rep. Back in ?’92 he was the co-founding member of one of the most overlooked rap duos ever: Organized Konfusion. This is where you see Pharaohe’s true genius. 1992!!!!!!!!!!!!! And those albums still sound so fresh ? unfortunately being signed to a label that happens to be owned by Disney and being a rap act that doesn?t follow trends also means that no one is going to have a clue how to work your record ? indeed no one did and only the lucky ones copped them back in the day and few remember them now.

But your thinking what does this have to do with ?Desire.? Well it has everything to do with the Pharoahe?s new record. It seems that no matter how far he comes he just can?t catch a break from this industry of music. From having several high profile guest appearances throughout the early 2000s to being courted by every major label in existence (Shady, Aftermath, etc.) he finally teamed with Steve Rifkin?s new label SRC. Surely the man who brought us the Mobb and the Wu can work a Pharoahe record! Well it doesn?t seem so ? have you tried to find this album? Let alone heard a single? Nope!

If you are lucky enough to find this album cop it! No matter what the price, no matter what your fears are this record is fresh. And probably more commercially ready than even ?Simon Says? had been. This freshness is in many ways thanks to none other than Mr. Porter (at least those talks with Shady yielded something!). Porter?s beats on this record have the frightening ability of being incredibly catchy and at the same time still on par with what you would expect Monch to lace.

We also see Monch getting down on the boards (which for any of you OK fans know that this is a good thing) and he teams up with several up and comers including the so called second coming of Dilla, Black Milk. The tracks that Milk delivers here are definitely in the vein of the D (Detroit that is), but I?m not sold that the kid is Dilla reincarnated. Probably the best beat comes from none other than The ALC ? Alchemist himself who has been killing the tracks for a minute. He samples M.O.P. on the hook and it?s only a select few who can keep something as live as the mash out posse ? Monch holds his own and will keep your head bopping throughout the cut!

As for Monch ? do I even need to break down what you get? Genius verses from one of the greatest poets of modern time. He addresses gun control on the spooky ?When The Gun Draws? and surprisingly touches on the topic of love more than is to be expected but what could have weighed the album down only makes it more diverse and shows you a deeper side of the man we call Pharoahe (it?s a long way from ?Who Stole the Last Piece of Chicken? but it?s all good!). He gets his political voice on with the classic ?Agent Orange? ? it?s nice to see it finally get a proper release as it was next to impossible to find when it came out in 2003 or 2004.

The album culminates with an epic 10 minute song that is actually three songs in one. ?Trilogy? tells a powerful story about love, life, death, and revenge. It is another excellent example of Mr. Porter crossing musical boundaries and showing that he has a lot more to him than ?P.I.M.P.? and the bullshit D12 is dropping. ?Part 2? of ?Trilogy? might be the smoothest part of the whole album as much for Bilal?s (still the MOST underrated/unknown singer in the industry) soulful vocals as it is for the almost free form beat that reminds me of Detroit?s Tribe collective from the 70?s ? could Mr. Porter be a digger at the heart of his keyboard concoctions? Maybe?

In the end my personal gripes against Steve Rifkin for not pushing this album like it was ?93 and Pharoahe is the new Wu will go unheard (he has Akon!) but this album will not. In 10 years time when we look back ?Desire? will stand their as a middle finger to all the label reps who tried to keep Monch down. No one will ever get in the way of his true desire ? creating timeless music for the people to enjoy. No matter how slowly they find their way to his albums people will always find their way and be glad they did.