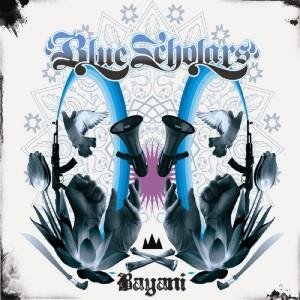 The Scholars, or The Blue Scholars to those of you that don’t call the 206 home are Seattle’s long hyped and only recent claim to Hip Hop fame. They are emcee Geologic & producer/instrumentalist Sabzi and with this record — “Bayani” — they are aiming for underground acclaim. They escaped the northwest and signed a distribution deal with the revived 90s heavyweight Rawkus Records and dropped their first album since Saba saw success with Ra Scion as Common Market.

That is now; let’s take it back a little. The Scholars hold many firsts for me. They were the opening act at the first concert I saw in Seattle (De La Soul October 04 — what up Meli?), they were the first local group I bought a CD from once I called the city my home and the first group from Seattle that I sent back to my home in Oregon for friends to check out. Those were the good old days. Things were simpler then. Today things have changed.

Geo & Saba have talent. I don’t think anyone can deny that but the charisma that I saw almost three years ago has since faded. Not that I blame them. In that time they have grown up in the spotlight. They became the city’s media darlings and, no matter how accurate, the face of Seattle Hip Hop. I’m not here to attack them any more than they already have been. I’m here to offer my opinion on this record that I know they put a lot of work into.

In truth they created a perfect record to break nationally. If you frequent any Hip Hop blogs you have probably already read their reviews — all glowing. And it makes sense. This record is technically light years ahead of what they debuted with and even several steps above “The Long March EP.” But what everyone is raving about elsewhere is the same thing that we in Seattle have been listening to for years.

Geo is a competent emcee and is very serious about delivering a message. That message is what Hip Hop started around: Fighting injustice. What was once a music emanating out of park jams in the South Bronx has grown and found its way to Seattle’s South End and beyond. Seattle, always the home to political leftists, bred a true warrior in Geo and he not only is constantly waving the flag for those in Seattle who go over looked, but he takes it further — all the way to his families home land in the Philippines. “Fight the powers that be” ? Chuck D said it and I have no problem with it, political activist rap was what sucked me into this culture to begin with. Preach Geo!

Saba is where “Bayani” holds promise. While Geo’s lyrical stance hasn’t strayed much over the years Saba has continued to grow and while you still get a lot of the same musical vibes that we heard on their previous albums it’s obvious that he took his Jazz training from his childhood and found new samples to combine with live instruments. On “Still Got Love” you see a beautiful mix of horns, synths and dusty drums that could totally be called Native Tongues 2007.

Those drums keep banging throughout several different songs and I wasn’t ever quite sure what it was that they reminded me of until I listened to “Fire for the People.” An anthem for the people Saba gave Geo a startling beat that screams Dr. Dre. This is far from a bad thing — just incredibly surprising. Dre’s sound is so perfectly distinct and in this cut Saba lays down a dark and ominous piano line that would have fit perfectly on Busta’s last album.

The beats unfortunately don?t stay this consistent throughout and when the flashes of brilliance fade we see more reliance on old techniques and less risk taking. This is especially interesting due to the fact that for the first time we get to see Saba shine on his own with the incredibly spooky yet hopeful instrumental track “Xenophobia.” Another track where the drums bang and the synths do the rest of the work. This on top of the fact that it keeps going for “The Distance” and we get to see Geo deliver another powerful message about Immigrants and the struggles they face trying to make a life in a country that doesn’t seem to want them.

Maybe that was the feeling that the Scholars felt as they made this record – lord knows there was a lot of hate being directed that way. But there’s nothing like two sold out shows in honor of its release to ease the tension and make ’em feel at home again. Now that was at the beginning of the summer and I am just now delivering this review. Why you ask? Well for many reasons that I don’t need to go into here and for one big reason that I will explain. I knew that if I wanted to express my thoughts on this record and do it justice like a history making album (Yeah I said it! Local artist on Rawkus!? That’s big!) deserves I had to marinate on it for a minute. I’ve come and gone to this record throughout the summer and had discussions with people about its merits. True it’s the same thing they have done forever, and yes Geo can get kind of monotonous (Guru didn’t?) but in the end the beats are knocking and they are doing what they do — who are we to say they have to change? So come in looking for what you’ve heard from the Scholars and all your dreams will be met along with a few surprises in the music department — but don’t come looking for nothing new because shit stayed the same.