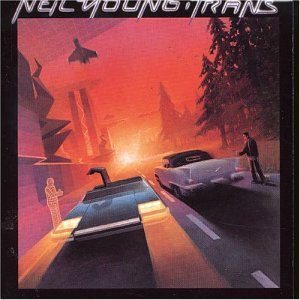 Trans is quite possibly Neil Young‘s strangest album, and one of the hardest to find; it’s one of the few Neil Young albums that’s out of print in the US. On Trans, Neil Young explored synthesizers and vocoders rather than the expected straight-forward guitar sounds he’d been using. To placate his record company, the first and last songs (“Little Thing Called Love” and “Like an Inca”) are in the “standard” Neil Young style — the rest of the album, not so much. One of the tracks (“Mr. Soul“) is an old Buffalo Springfield song drastically re-arranged. This should have given people a hint for the tour promoting the album; when angry fans would shout out for his old songs, he’d play them… in the Trans style. (I’d love to hear some of this stuff, actually!) Some cuts from Trans can be found in Neil Young’s second feature motion picture, Human Highway — one or two of the songs can be heard coming out of car stereos.

The album did very, very poorly commercially (and not-so-hot critically); it was his first for Geffen records, and the combination of this record and his next caused Geffen to sue him for making non-representative albums — they argued that they’d signed him with the intent that he’d deliver Neil Young albums, since he’d been very successful during the 1970s, and as such, they wanted records that sounded like Neil Young records. (They, of course, lost; after all, any record Neil Young puts out is, by definition, a Neil Young record; anything he does must sound like Neil Young.) Even though it didn’t do very well in the commerical sphere, Trans has turned out to be somewhat influential on electronic pop musicians working today — it is a great album and an example of an artist expanding creatively and making a strong pop album using instruments he typically wasn’t known for — and excelling at it.

While Trans proved to be very influential, the song “Computer Age”, however, tends to show off more of his influenced side — mainly, Kraftwerk. The Computer World

album had come out a bit earlier, and it sounds like it was one of the biggest influences on this record; understandable, since Kraftwerk had probably the most success with vocoders and synthesizers being used in pop music the way Neil Young was using them.

Another track, “We R In Control” echoes “Computer World” lyrically and in sound; the Kraftwerk song has lyrics like:

There’s a sad story behind Trans. Neil Young’s sons were born with a very strong cerebral palsy and couldn’t speak or communicate; he found that his son Ben would react when he’d speak through a vocoder, and so he recorded Trans as an attempt to communicate with him. (It’s also possible to read Trans as a bit of a commentary on his sons’ condition– many of the distorted, processed vocals are very hard to discern as well; Neil Young’s also having trouble communicating on this album.) In interviews, Neil Young has said that Trans is his favorite of his own albums. It’s my favorite of his records, too.