Well, as Neil Hamburger once said, they can’t all be zingers. While the last issue was a glimpse into the future of what MAD would be, MAD #3 is a letdown. While the first issue was still trying to find itself, MAD #3 looks and feels like an issue of MAD in terms of the content. Unfortunately, the stories and jokes are much weaker, and it feels like Harvey Kurtzman was treading water. (Spoiler alert: MAD got better.) But even in this weak issue, there are still high points.

MAD #3 opens with a glowing letters page, as E.C. finally got the letters in about the first issue. Though later letters pages would be more entertaining, this one is comprised of brief pull quotes of people writing in to say how great issue #1 is. It feels a little odd, given MAD‘s later policy of self-depreciation, but given how MAD was so different from everything else on the stands at the time, I can see where Kurtzman would be keen to show off that his experiment worked. Unfortunately, it sets the rest of the issue up to meet the high praise and, well, it falls a flat. 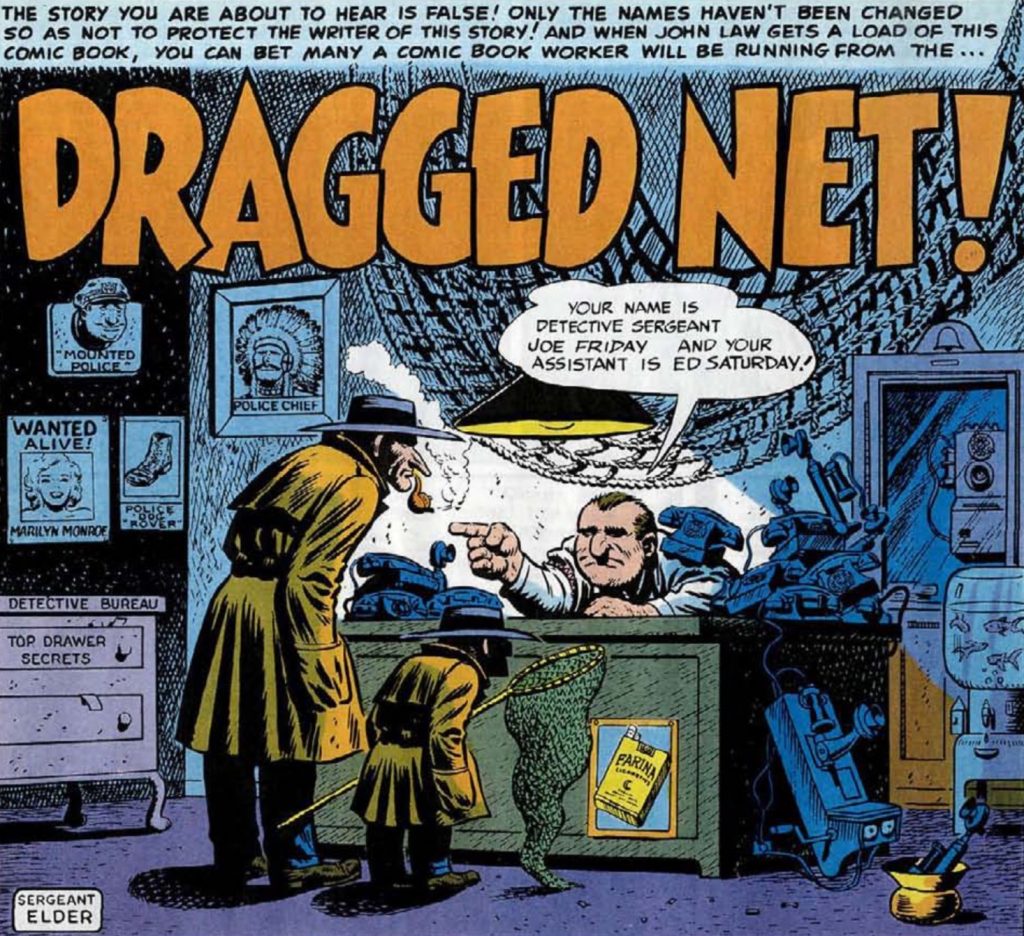 The first of the four main stories, “Dragged Net!” is a parody of Dragnet, the long-running Jack Webb police drama. This is based on the radio version, as evidenced by the fact that Joe Friday looks nothing like Jack Webb. (And, yes, smart guy, the Dragnet TV show did exist in 1953; it’d been on the air since 1951. Though the version that is rerun more often is the later 1960s revival.)

Though there are some great gags in “Dragged Net!” — which we’ll go into later — it’s overall very weak. If there’s an easy point of illustration, it’s the hilariously creative parody name of Jack Webb’s character. See, they changed Joe Friday to — get this — Joe Friday. Given the awkward spacing in the word balloon, it’s pretty clear the names were, well, changed. But the story is a mish-mash (something even called out in the script), and most of the jokes feel like first drafts. For example, Friday and Saturday go to the Congo to speak with another suspect (no, it doesn’t really make a lot of sense), apparently just to set up a “Congo Line”/”Conga Line” pun.

But let’s talk about the good parts of “Dragged Net!”: The first three panels under the splash panel feature the classic repeated composition with absurd changes that Kurtzman loved, executed perfectly by Elder. (For those wondering why I’m giving Kurtzman credit for the panel layouts: Kurtzman worked in an uncommon fashion in comics; where many editors/writers would simply give the script over to the artist to render as they wished, Kurtzman would provide pencil layouts he expected his artists to stick to.)

While repetition in comic panels is often looked down upon as lazy — especially in the case of cartoonists who merely reproduce the same panel rather than redrawing it — here, it tricks the reader into complacency. If you’re scanning the story, you won’t notice the gags hidden in the changing details. Another lovely bit about the artwork is Elder’s talent for gross-out, when they arrest the story’s antagonist, Glotz. He’s a grotesque, bare-chested man who messily eats an Italian buffet. It’s supposed to be disgusting and it truly is. 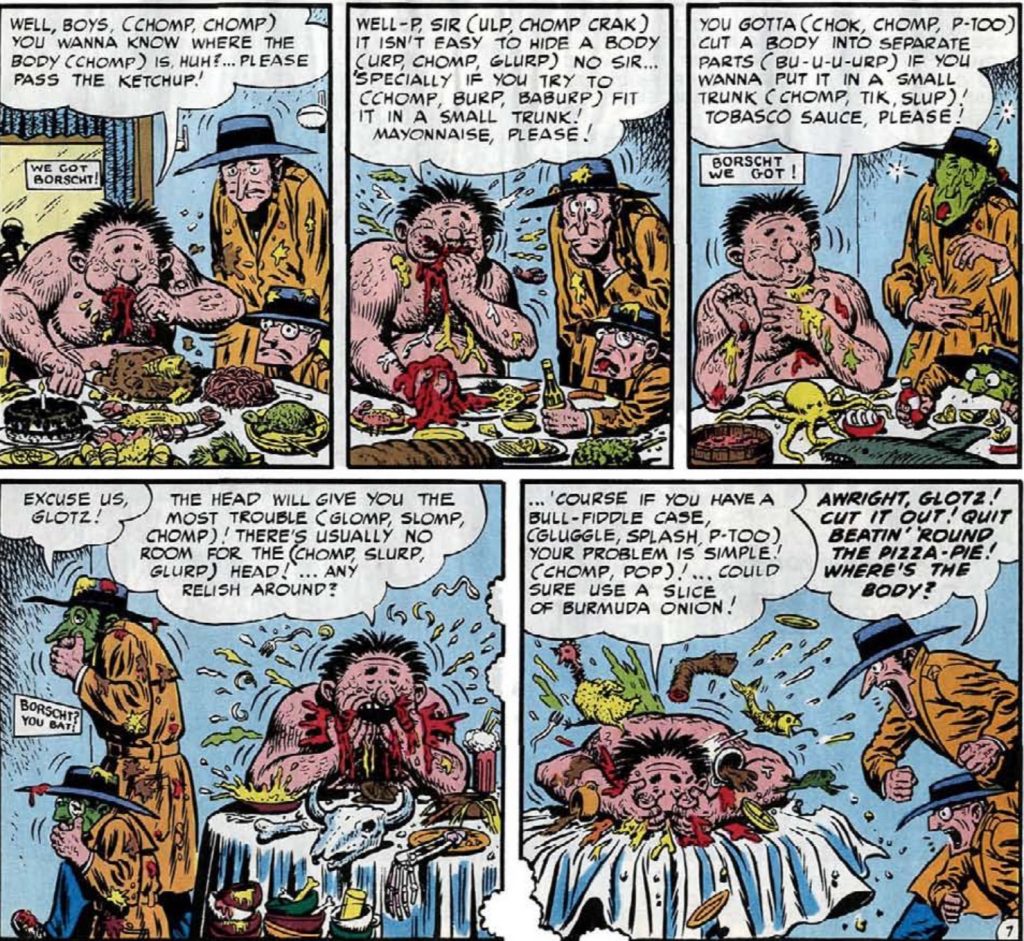 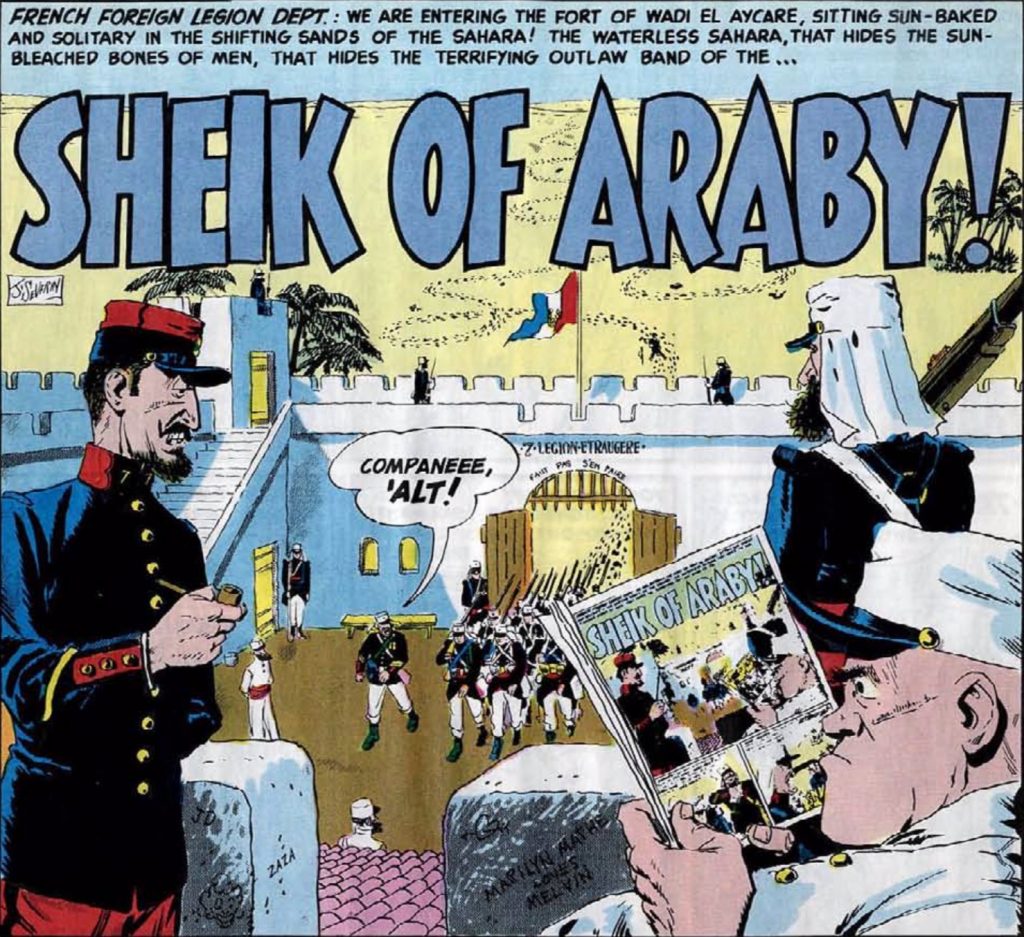 Speaking of lousy final punchlines, there’s “Sheik of Araby!” The setup for the punchline is on the third page of the story, and as soon as you read the last panel on that page, you’ll know how the rest of the story goes — and it’s not that great a joke. (One of the legionnaires says he joined the French Foreign Legion to escape his wife and kids. One guess where that goes. Given later stories like the brilliant “Bringing Back Father!” in #17, “Sheik of Araby!” is lazy.)

There really isn’t much to recommend this one. The normally outstanding art on display in MAD feels phoned-in on this story. It feels as if John Severin clocked this story for being as weak as it is and didn’t want to spend a second longer than necessary on it, leading to some really sketchy designs.

Admittedly, I might be too far removed from the source material to properly appreciate this one. I know that “French Foreign Legion” was a genre unto itself, but a genre I only really know from parodies of it, like Crock and old episodes of Hanna-Barbera cartoons where, to escape some horrible fate, the main character joins the Foreign Legion. And, uh, Crock is terrible. The inevitable Foreign Legion episodes weren’t much better.

Honestly, I’ve probably spent more time on this story than it deserves. Moving on, we get another couple of text stories — “Rookie Gladiator,” which is a sports-announcer style play-by-play of a Roman gladiator battle. It’s not terribly inspired and ends when the column inches ran out. Next is “The Dandelion Caper,” another Cosmo McMoon story. Sadly, a lot of the McMoon stories read like a wall of nonsequiturs, in the “LOL RANDOM” sense, and this is, so far, the LOL RANDOMiest. The only thing it has to recommend it is a shoutout to Marie Severin, EC’s colorist and a comics legend who sadly passed away this year. (On my birthday. Worst birthday present ever.)

One bit of housekeeping — in my previous pieces, I said that Kurtman wrote these text pages. That’s a mistake — according to Doug’s Mad Cover Site, these pieces are all written by Jerry DeFuccio, who would stay with MAD until 1980. (DeFuccio was also a brilliant comics historian, and while I’m critical of these particular pieces, I don’t intend to slight him, any more that I intend to slight Kurtzman for, say, “Sheik of Araby!”) 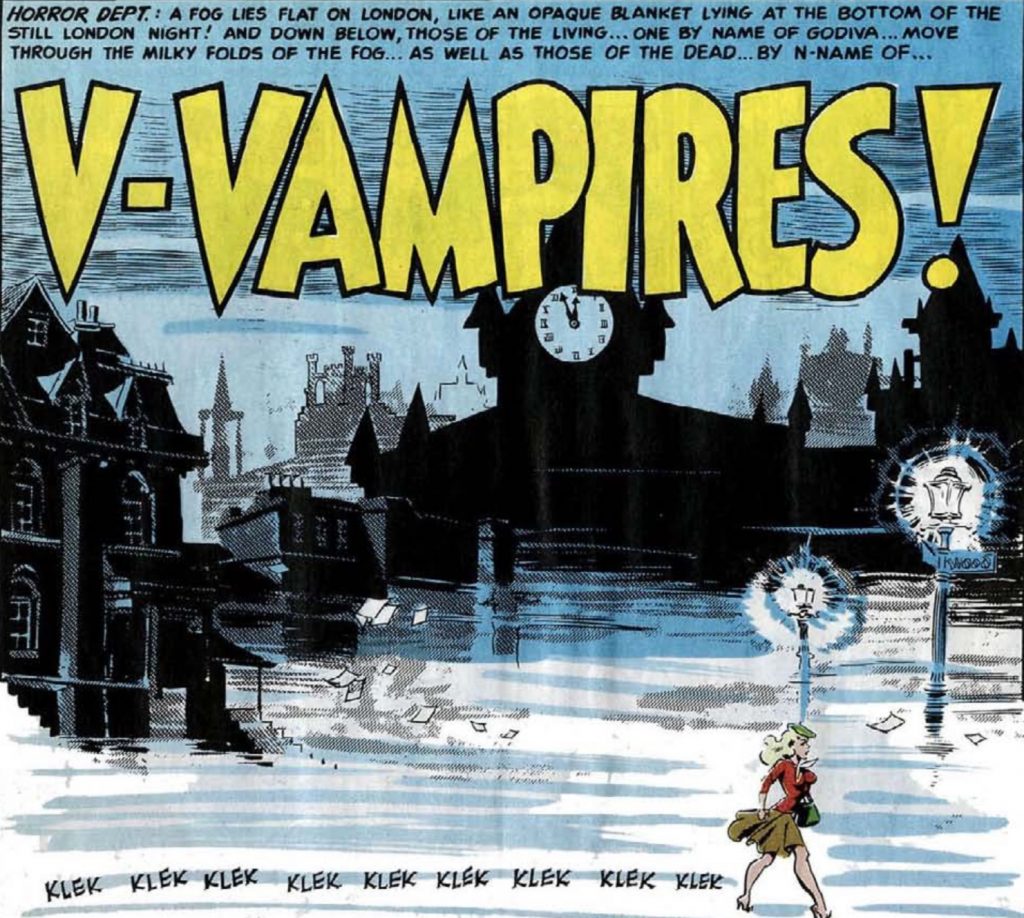 But all is not lost! Next is “V-Vampires!” which is a true MAD classic. Amazing artwork from Wally Wood (and, again, look at that composition). “V-Vampires!” is beautifully rendered, but the story is also well-told and funny. The silent first page works wonders, and creates a tense mood equal to the best horror movie. There are great gags, and a double-twist to the story. No wonder this story got the cover. It’s strange that I have less to say about “V-Vampires!” other than just, well, “GO READ IT.”

Wood redrew the story for a 3-D E.C. special issue, though the layouts are different and, honestly, weaker than the original. Compare this page from the redrawn version, which puts the punchline to the particular gag on the same page, rather than making you turn the page which gives the joke much better timing. 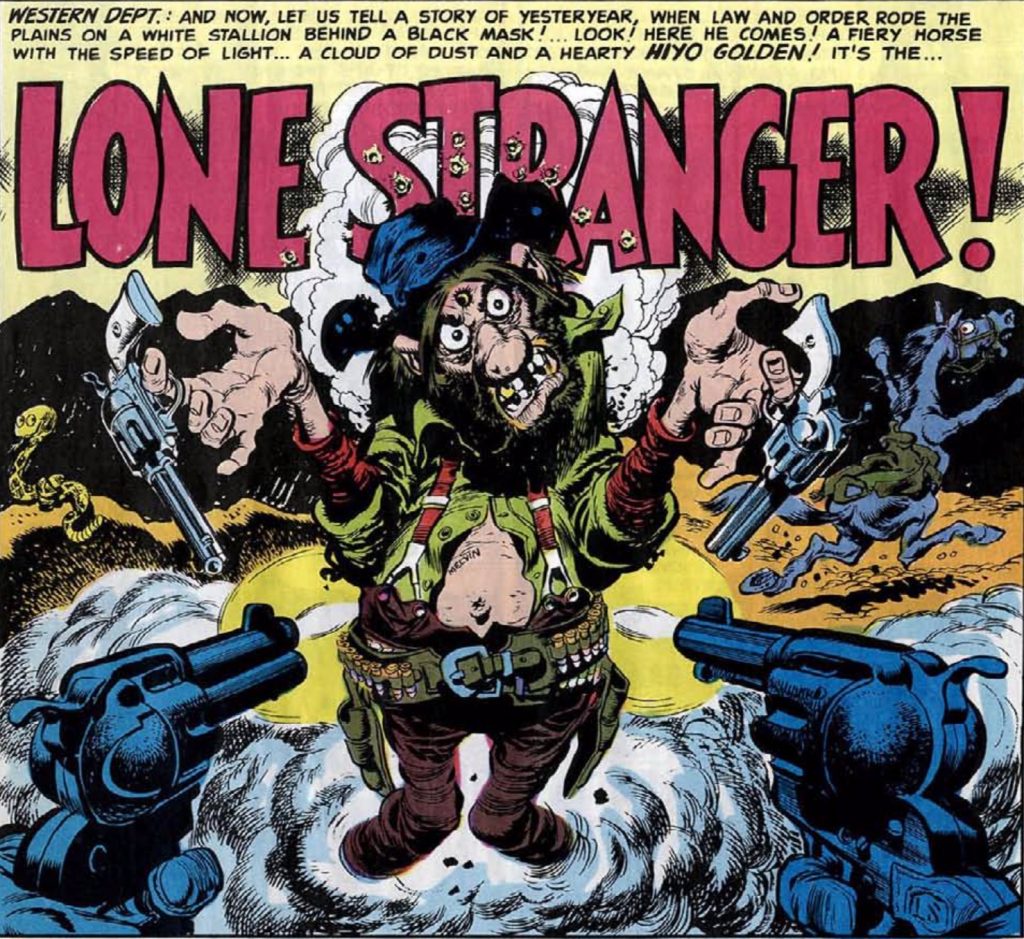 Finally, we come to “Lone Stranger!” The Jack Davis illustrated parody of the Lone Ranger is amusing, though Davis’ art seems a little… off to me. Still, it’s a decent story, even if Kurtzman runs out of story a few panels before he runs out of pages, ending on a weak call-back. But there are some great gags — I’m particularly fond of the way the robbers try and fail to open the cash-box that holds the Stranger.

The interesting thing is that Kurtzman revisited both “Lone Stranger!” and “Dragged Net!” in later issues (MAD #8 and #11 respectively). Though the later stories recycle a few gags from the earlier stories — and I can’t blame him; in the 1950s, comics weren’t really expected to be read and re-read; they were ephemera — both later stories are much stronger than the MAD #3 versions. (And in the second “Dragged Net!” Joe Friday actually looks like Jack Webb!) The gap in quality, however, is much more drastic between “Dragged Net!”s than “Lone Stranger!” and “The Lone Stranger Rides Again!” The second “Dragged Net!” story is generally what people think of when thinking of Kurtzman’s MAD take on Dragnet; the story flows much better and the gags are stronger.

The two “Lone Stranger!” stories, on the other hand, are much closer in quality; neither are the star of their respective issues, but that’s partly due to each having a bonafide classic story to compete with. MAD #3 has “V-Vampires!” where MAD #8 has “Batboy and Rubin!” and, well, there’s no contest. Still, both are relatively strong — if not, exactly what we’d consider woke in regards to the American Indian community. The scenes with Pronto drunk — even though, in the original, Tonto was always sent to pick up gossip of future crimes at the local saloon — are uncomfortable today. Of course, the issue is 74 years old; as I’ve mentioned before, while this stuff is worth pointing out, it’s also of a different time. I’ll tend to give this stuff a pass more than I would the same thing created today. It’s still a little jarring but, well, the past is a foreign country and all that.

If there is some good news about MAD #3, it’s that next is #4, which was MAD‘s breakout issue and the first to sell out. That issue was when MAD became a bonafide phenomenon, and