One of the things I find most interesting about the first issue of MAD is how it’s backloaded; the final two stories are superior to the first two, and feel the most like what MAD would become. Thankfully, MAD #2 continues the trend. Of the two issues, it’s clearly the strongest, and the most MAD-like. It’s also the issue that has “Mole!,” one of the classic MAD pieces, but more on that later. 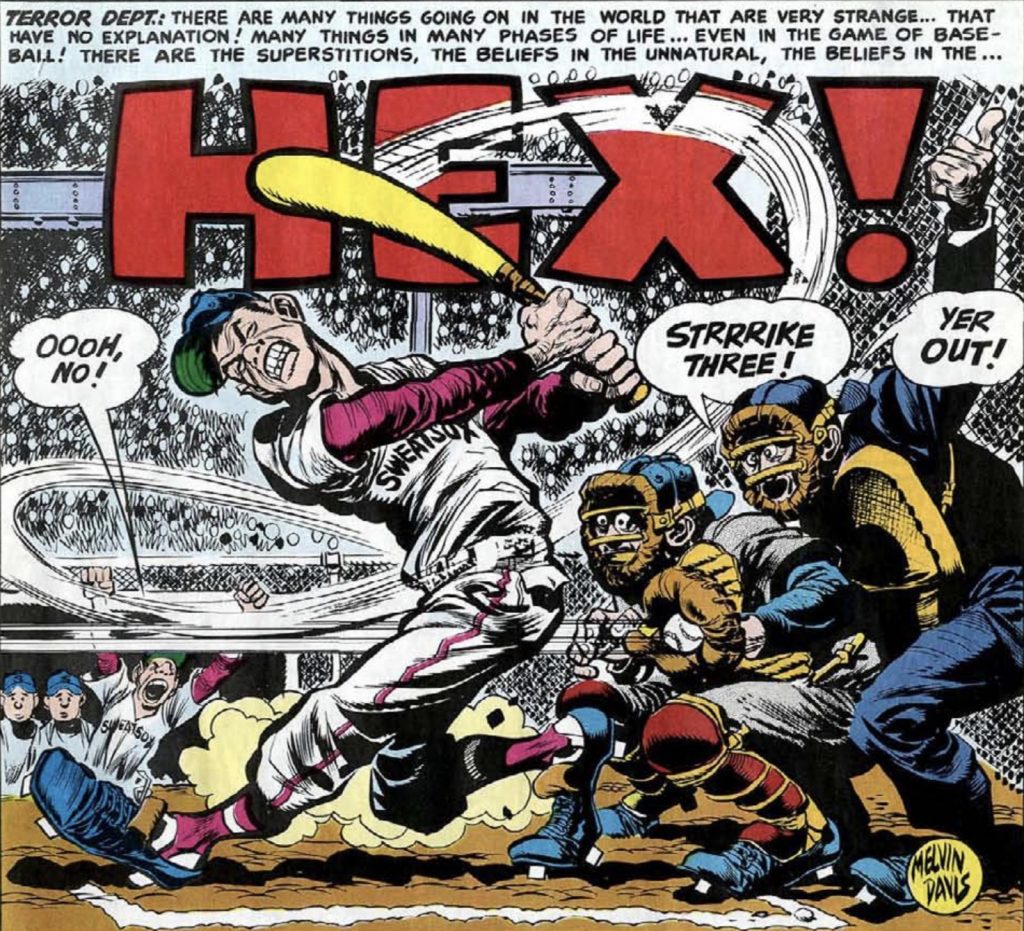 Like MAD #1, MAD #2 opens with a horror spoof, illustrated by the amazing Jack Davis, but “Hex!” is far superior to “Hoohah!” The story is much stronger; while, like “Hoohah!,” it uses a simple framework, there’s more going on. “Hoohah!” felt padded, where “Hex!” fills in the details. Both stories are simple — “Hex!” is a simple tale where The Old Witch from The Haunt of Fear falls in love with a baseball player and tricks him into agreeing to marry her to win the playoffs. But there’s more care put into the telling of it.

We get more information on the characters and the type of people they are. There’s far more detail put into the story. And, well, any time Jack Davis gets to draw sports stories, you can tell he’s really in his element. “Hex!” works on a lot of levels, and while it’s not twist-driven like a lot of EC horror stories, it’s an actual story instead of a collection of connected punchlines. 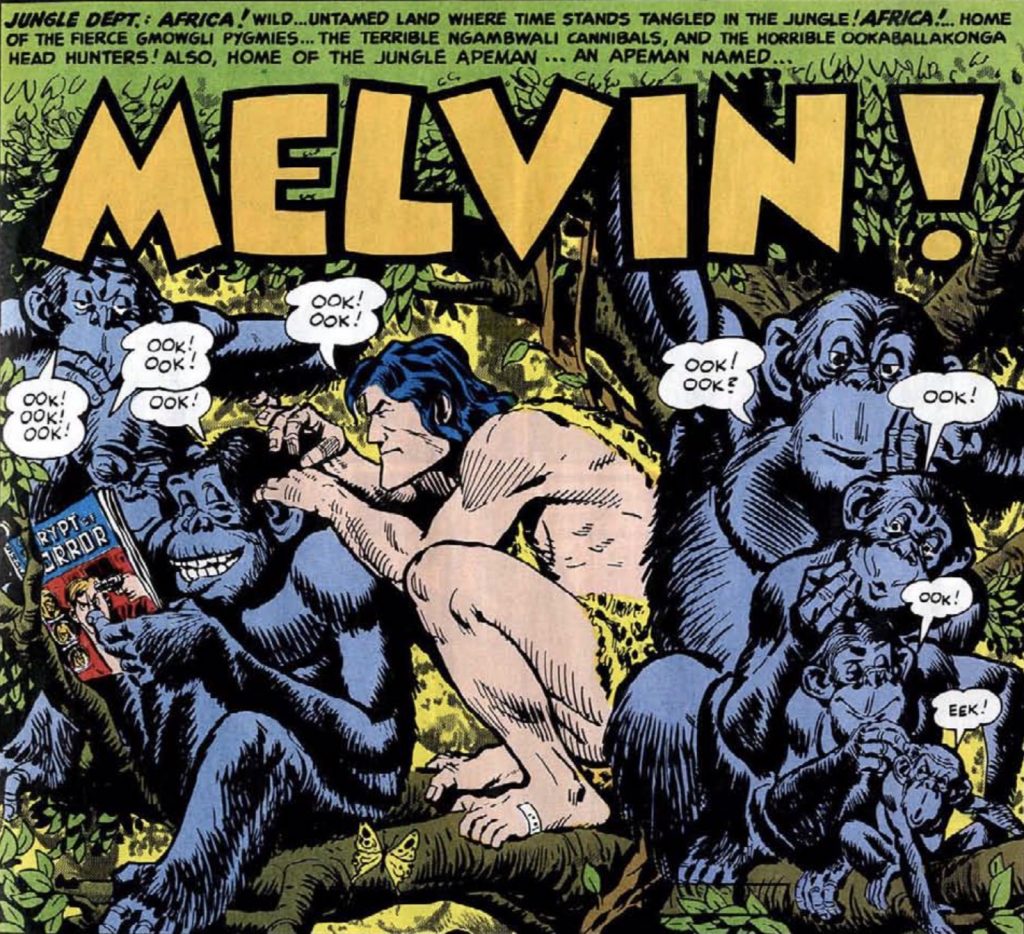 Another of John Severin‘s rare MAD appearances, “Melvin!” is also the first time MAD parodies a specific character, rather than a genre. The spoof on Tarzan of the Apes hits most of the main points of the original, telling the story of a nearby tribe that wants to shrink Melvin’s head. Surprisingly, in 2018, this story doesn’t read nearly as, ah, problematically as it could. While it trades on African stereotypes, the African characters speak just the same semi-broken English that all the other characters speak. (Except for the chief, who looks remarkably like Bill Gaines, and speaks in then-modern slang.)

I’ve read stories that hold up far worse when it comes to modern sensibilities, and while “Melvin!” isn’t necessarily “woke” by today’s standards, it’s still (relatively) progressive, especially for 1952. It’s not exactly “Judgement Day!” from Weird Fantasy #18, but considering the time and context in which it was published, it’s not bad.

After “Melvin!” we get another couple of the forgettable text pieces — one starring the admittedly fantastic-named private eye Monongahela Wheeler, and another visit with Professor Cosmo McMoon. Neither are particularly good, but considering that the meat of MAD is in the comic stories, it doesn’t matter too much. 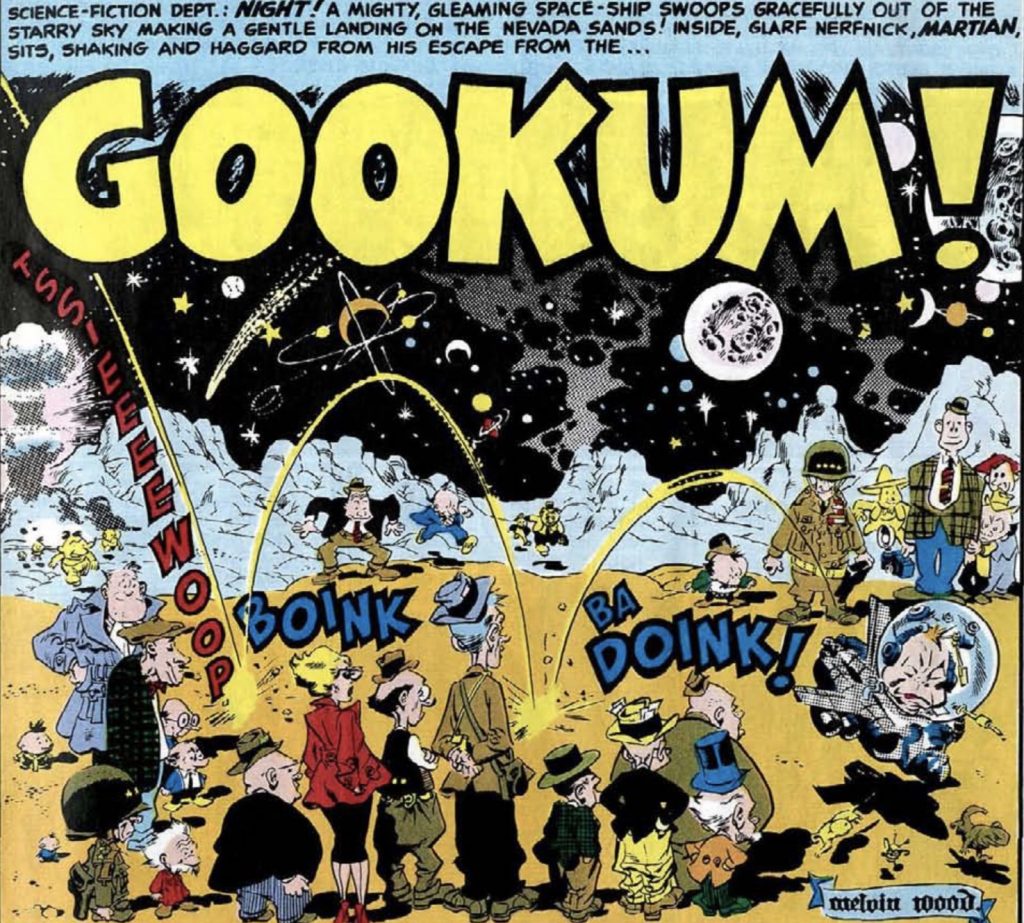 Early MAD thrived on genre parodies, and like in MAD #1, we get another science fiction parody. Where “Blobs!” was a straightforward adaptation of an existing story that felt a little out-of-place in MAD, “Gookum!” definitely feels like MAD, even if it is a bit slight. But any excuse for Wally Wood art is welcome, so it’s impossible to get too mad about it.

“Gookum!” is an EC-style twist story, where Glarf, a Martian who crashed to Earth tells reporters over a meal of why he had to escape his home planet. A life form known as Gookum lay outside his city’s walls. Gookum is a pink, jelly-like substance that lies dormant for 500 years; but when it awakes, it devours organic material. The twist: It’s what we earthlings call Jell-O. (Sorry for the spoiler from a 66-year-old comic book.)

While the story is one of the weaker of the four, it’s got a lot to recommend it. Wood draws the gookum as… oddly delicious looking. And it’s the first appearance of the “It must be jelly, ’cause jam don’t shake like that” jokes that would be a runner throughout the entire comic book run. Of course, even aside from the gookum, Wood’s art is gorgeous as always, even with the grotesque closeups of Glarf, illustrating his arrogance. 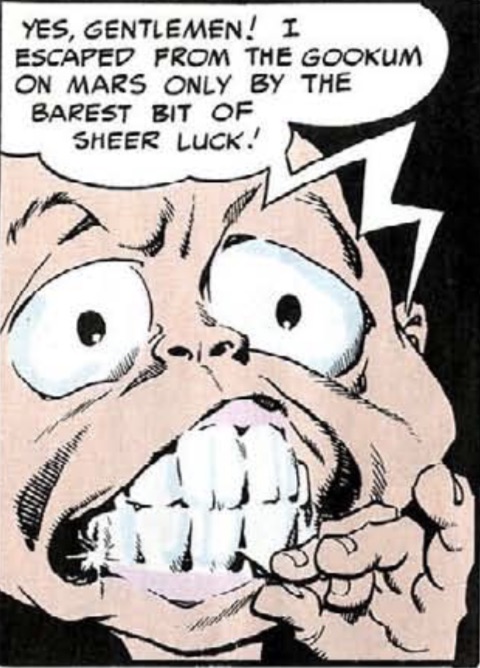 But next, of course, is the standout of the issue: 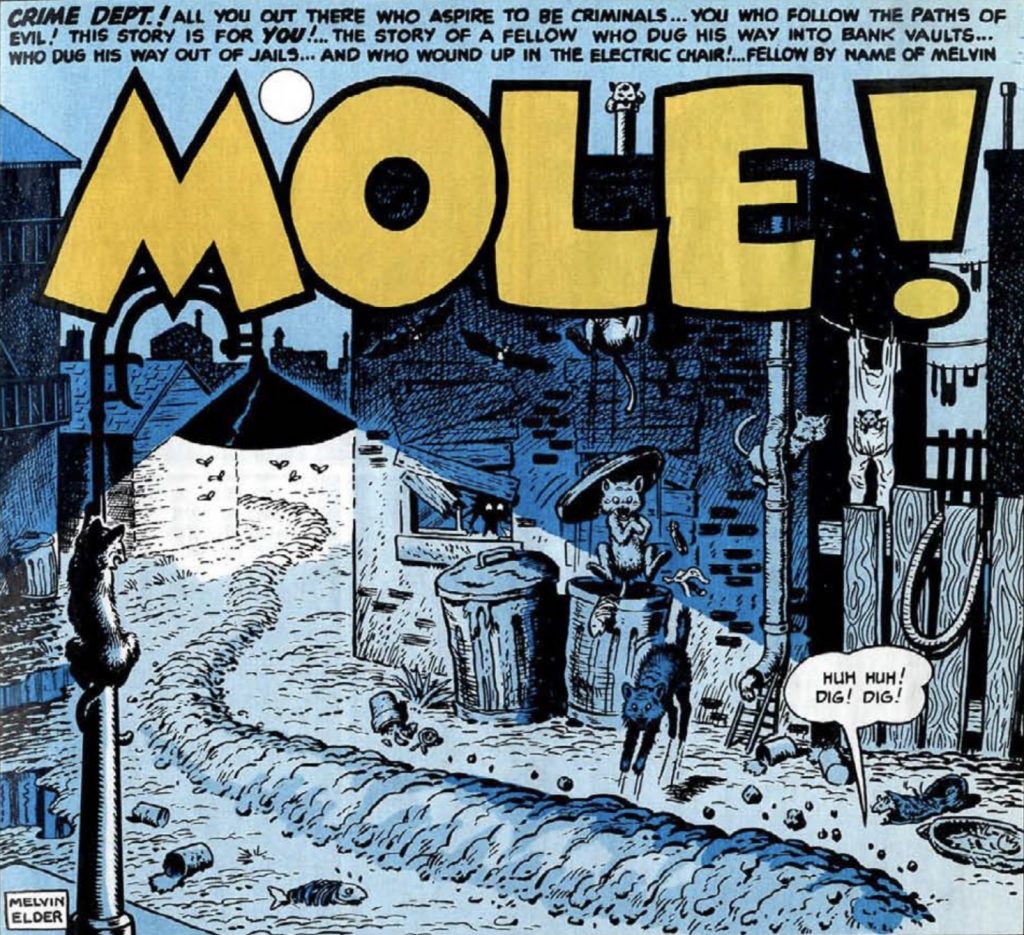 “Mole!” is one of the first truly classic MAD stories, and to think that it appeared as early as MAD #2 illustrates how Harvey Kurtzman knew what he wanted from the beginning. And when I say it’s a classic, it’s not just me talking: This story is why the real name of  Marvel’s Mole Man is Harvey Elder. Though the story is built on the repetition and escalation of many MAD #1 stories, “Mole!” is particularly successful due to Will Elder‘s outstanding art.

Last time I mentioned Elder’s penchant for “Chicken Fat,” and attempts at chicken fat were a hallmark of most MAD imitators. But it’s also where most of those imitators failed. The secret to perfect chicken fat is that while it’s cluttered with gags, it doesn’t get in the way of the story. The chicken fat isn’t fighting for attention. Many of the imitators saw the clutter and assumed that’s all it was — and thus, you’d get panels where you could barely tell what was going on due to all the crap.

Elder’s work, on the other hand, reads clearly. The gags don’t get in the way, but build the story up. For example, let’s look at this panel from the second page of the story, depicting a bank vault: 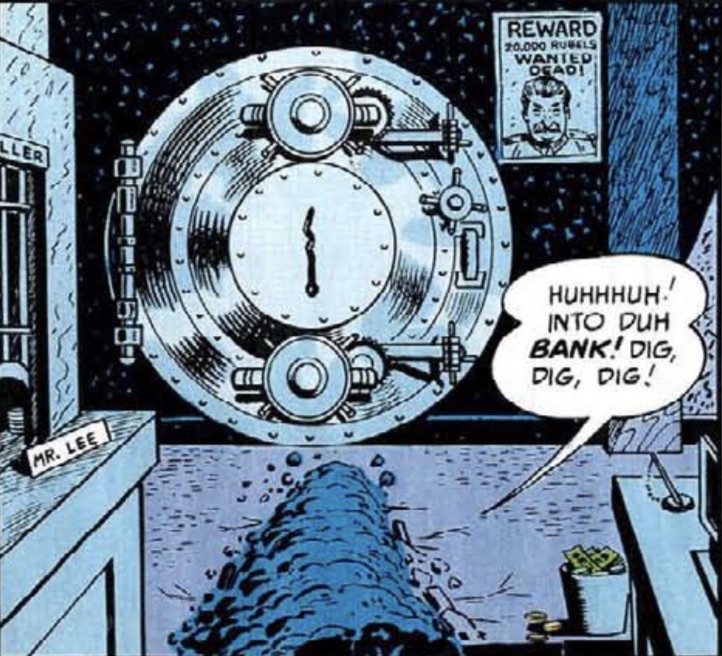 It’s easy to see what’s going on here: Melvin Mole is digging towards the bank vault in hopes of getting the money inside. Obviously. But look again: the vault has a drill mark from a previous, failed attempt to break in. There’s the Stalin “Wanted Dead!” poster on the wall. There’s the wastepaper basket full of money. But your eye is immediately drawn to the important bits: Melvin’s path to the vault. If you’re reading quickly, you might miss all the detail, but you’ll understand what’s going on in the story.

But none of this would matter if the story itself weren’t funny. And, of course, it is. Melvin Mole is a freakish villain, of the type you might find in Dick Tracy. And like Dick Tracy, it’s ultra-violent; Melvin’s body count in this story alone is nine — and that’s only counting the bodies you see dead. It’s probably closer to 15 or 20. And, again, the escalation works — not only do Melvin’s prison cells get smaller and more depressing, Melvin’s attempts to escape go more and more wrong until, ultimately, he digs himself into the electric chair.

The story is exquisitely written and illustrated. As good as stories like “Ganefs!” and “Varmint!” from #1 were, and, even as good as MAD #2’s “Hex!” is, it’s “Mole!” that’s the bonafide classic. If you ever need to illustrate why MAD took off the way it did, just show the person this story, and all will become clear.