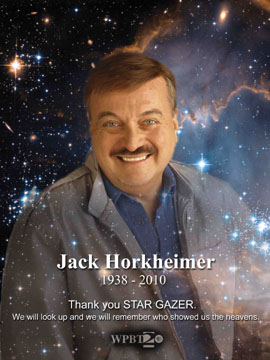 It’s old news now, but Jack Horkheimer died last week; he’s always been one of my favorites, just because he had this great energy in sort of a nerdy way — but that ideal of “Here’s something cool I want to share with you!” shined through every episode of Star Hustler/Star Gazer.

Jack was actually one of the first people I tried to interview for Kittysneezes — or at least one of the first folks I didn’t know, anyway.  Unfortunately, I couldn’t really get in contact with him. I left a message at his observatory, but I never heard back. I doubt the message even got to him, honestly — but that’s totally cool; KS wasn’t as established as it is now.  (For whatever value of “established” KS fits in.)

The thing I loved, too — aside from that energy — is that he had a great sense of humor.  I loved the old Cartoon Network bumpers he recorded in the ’90s.  He still did his Star Gazer persona, just talking about Powerpuff Girls rather than, say, Orion.

Here’s a great article written about him in 1982.  I found it when I was doing research on him a few years ago for that potential interview — so, yeah, I’d say it was worth it reading up on him, even if that interview never came to fruition.