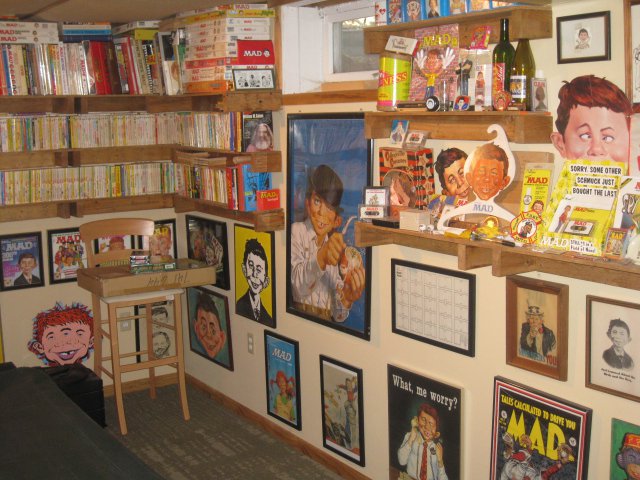 I discovered Tim Johnson on Facebook as a fellow MAD collector… but as it turns out, his collection puts mine to shame.  After paging through his photo albums of all the cool stuff he has and coveting some of the stuff I’d always wished to find, like the MAD Straitjacket from the late ‘50s, I decided to contact him and see if he’d be up for a Kittysneezes interview with a fellow MAD fan.

Tim Johnson: A leg lamp from The Christmas Story.

Tim Johnson: Besides fathering my three children, I’ve been in a television commercial.

Tim Johnson: History of the World – Part I, Caddyshack, and Dances With Wolves. 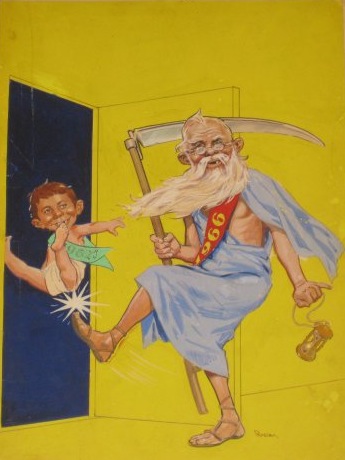 Tim Johnson: Get off of your high horse and put the band back together.  Tina misses you.

Tim Johnson: A management meeting at my old job.

KS: What’s the coolest thing in your collection?  What about the weirdest?

Tim Johnson: I’ve got a lot of cool things.  But the most precious thing is the original cover painting to an issue of Swedish MAD from 1967. The weirdest thing would be a Little Charlie’s t-shirt that was worn by Bill Gaines.

KS: Have you ever made it to the MAD offices? 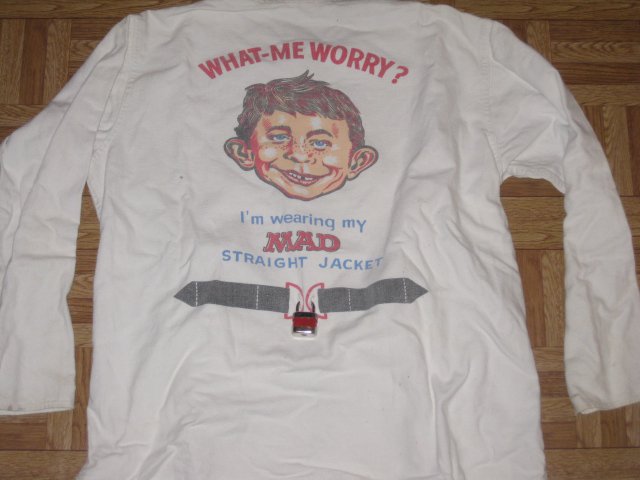 KS: You’ve got a Facebook photo album of MAD Holy Grails — the cufflinks, the straightjacket, and other cool stuff — what’s the next Holy Grail you’re after?

Tim Johnson: I would like to own a piece of original MAD cover art by Norman Mingo.

KS: Do you have a favorite issue or story?

KS: What is your opinion of the Kurtzman MAD (and his later magazines Trump, Humbug and Help!) versus the Feldstein MAD?

Tim Johnson: I’m not really into the earliest MAD stuff.  To be fair, I’ve never really given any of the Kurtzman stuff a chance.  I’ve been more than satisfied with the stuff I read growing up, so the early comic book stuff doesn’t interest me.  Besides, they’re comic books.

KS: What do you think of MAD‘s decision to go to color and accept advertising?

Tim Johnson: I hate it.  I’m more of a traditionalist, so this new concept doesn’t sit well with me.

KS: Have you seen the new MAD show on Cartoon Network?

Tim Johnson: I have not seen the show, outside of a 2 minute pilot on YouTube.  I think if it helps MAD sell more magazines, it is worth it.

KS: What is it about MAD that means so much to you?

Tim Johnson: It keeps me in my favorite childhood memories, and I have MAD to thank for developing my sense of humor.  I have stacks and stacks of old MADs that my kids read now, and you have no idea how much that pleases me.

KS: Do you collect anything other than MAD memorabilia?

Tim Johnson: Yes.  I also collect vintage MTV memorabilia (pre-1986).  Although it doesn’t match the sheer volume of my MAD collection, my MTV collection is quite impressive as well.

KS: Is there anything else you’d like to add?

Tim Johnson: Thank you for considering me for an interview.  I hope people take an interest in what I have to say.