We dig New Zealand’s keyboard-playing chanteuse Princess Chelsea here at Kittysneezes — Rachel Anderson did a review of her brand new debut album Lil’ Golden Book (now available on gold vinyl!), and now Rev. Syung Myung Me is here to present an interview with the mastermind behind the album, Chelsea Nikkel herself!

Chelsea Nikkel: “Souvenir” by Orchestral Manoeuvres in The Dark.

Chelsea Nikkel: The Eversons from New Zealand.  They released a free EP on Lil’ Chief Records earlier this year!

Chelsea Nikkel: I have a room I call my ‘teen hangout space’ which is the only room I’m allowed to decorate with posters.  It has a huge Led Zeppelin II poster, a Beatles poster and a Jonathan Richman poster on the wall as well as old gig posters from some of the bands I’ve played in before.  I prefer not to display my hip and eclectic music taste in the other areas of the house.

Chelsea Nikkel: My boyfriend owns a sitar that at one time may have been owned by George Harrison.  He bought it second hand from a Hari Krishna temple in Christchurch and the man who owned the temple said George Harrison had donated it when he passed through in the 70s. He sold it for $150.  I’m not sure if this is true or not, but I like to believe it is and that inside my decrepit flat affectionately nicknamed “the ghetto” there lives George Harrison’s old sitar, in its original velvet lined case.

Chelsea Nikkel: I really like my album a lot.  It was a lot of hard work – and it’s been pressed on vinyl recently which makes it feel more special.

Chelsea Nikkel: I don’t know anything about art to be honest.  My friend Joe Astle gave me a comic book he drew last night.  One of the comic panels says “life could be worse you could have no face” and then there is a cool drawing of a guy with no face.   I remember seeing works by Yves Klein in Europe and I liked how he invented his own colour “Klein Blue”.

Chelsea Nikkel: Drive, The Notebook, Lars and the Real Girl.

Chelsea Nikkel: I have a painting by my friend Vincent Lum – it is a giant moustache on cream background.  I think it’s only there because he left it there when he moved to London though.

Chelsea Nikkel: When I was younger my old band Teenwolf (the bratty band) would take road trips to Wellington from Auckland (about 10 hours) and we would play this where you have to holler out the window at farm animals and try and get their attention.  You’re meant to kind of say stuff to them like “hey losers what are you doing, just standing around” and try and make them run away.  You get more points for cows than sheep and more points for sheep than horses.  I guess it’s a pretty mean game but I don’t think we ever really scared many animals as the road was too far away from the paddocks – it just gave us an excuse to yell out the window like idiots.

Chelsea Nikkel: I’m not a huge reader – I used to read a lot of sci-fi and fantasy as a child.

I mostly enjoy the short story format – I like Flannery O’Connor’s short stories and Roald Dahl‘s short stories.  I am also a fan of Richard Brautigan‘s prose.

My favourite novel is probably The Dice Man by Luke Reinhardt.  I first read it on a family holiday in Europe as a depressed and reclusive teen. Naturally it was a hard time for me as I was an unfortunate middle class white teenager whose parents had shouted them an all-expenses paid tour of Europe.

Or fresh sashimi made from Trevally (a common fish in New Zealand). 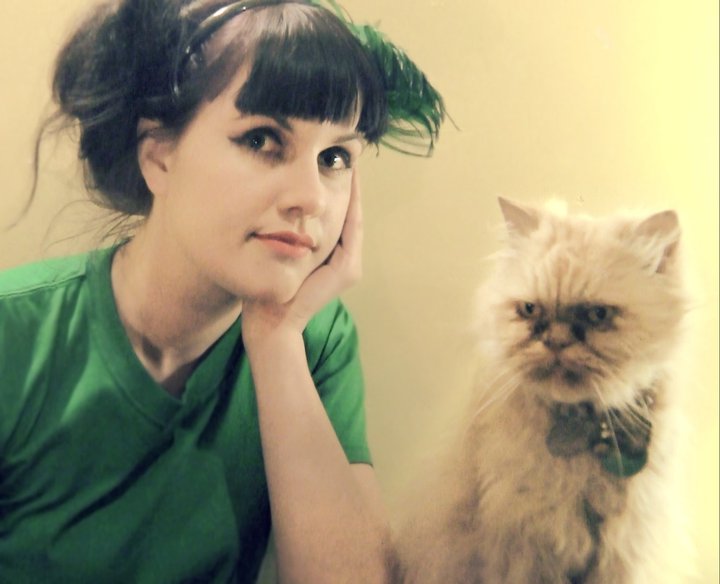 KS: How are you finding New York?  Is your kitty Winston traveling with you?

Chelsea Nikkel: New York is exciting but it also stressful too.  Winston stayed at home – he is being well looked after though.  He has made friends with our house sitters and sleeps with them on their beds.  He has an odd habit of watching people in the bathroom too which he is keeping up.

KS: As a fan of fairy tales, and someone who doesn’t shy away from the dark in her own work, what do you think about the more modern re-tellings that can iron out some of the darker, scarier bits, along the lines of what Disney films do?

Chelsea Nikkel: I’m a fan of the older Disney movies like Pinocchio and Sleeping Beauty.  Pinocchio was pretty terrifying for me as a child but I recently watched it as an adult and the scene where his friend turns into a donkey I found disturbing as an adult.  You should YouTube it sometime!

The newer ones I’m not into so much.  I like Pre-Lion King Disney a lot but that nearly sounds as wanky as saying “Pre-’Vogue’ Madonna”.

I still go and see the new films them as I love the world that Disney creates, and it’s a form of escapism for me.  I feel the more modern commercial pop-inspired soundtracks cause the newer films to suffer greatly.  The older more Broadway musical style soundtracks were much better and had some great songs.

Give me Ursula the Sea Witch singing “Poor Unfortunate Souls” over whatever awful crap Rapunzel was singing in that new one I still went and saw any day.

KS: Is “The Cigarette Duet” autobiographical to some degree?

KS: I hear some interesting sounds and instruments on the album — what are some of the more unexpected things you’re playing?

Chelsea Nikkel: There is a glorious old pump organ on “Ice Reign”, and thunderstorm samples on “Ice Reign (Reprise)”.  “The Cigarette Duet” samples a cigarette rolling machine at the beginning and “Frack” samples gunshots, probably inspired by MIA.

KS: Lil’ Golden Book feels very much as if it’s intended to be consumed as an album, rather than a collection of singles.  What kind of things do you think artists can do to get casual music fans into the album format instead of just downloading individual songs?

Chelsea Nikkel: If you set out to make a cohesive album, fans of the album format will recognise and appreciate it.  As far as converting “single” listeners – I’m not too sure.  I think it’s important for people to listen to what they want when they want. Even though I’ve made an album – each individual track is perfect in its own way in my opinion, so if someone only listened to one song I’d still be happy with that.

I think what needs to change is people’s attitude towards music.  We are living the Wild Wild West musically speaking where people think it’s OK to take what they want for free.  People don’t think that music is something they have to pay for anymore.

Chelsea Nikkel: Some people don’t expect me to like metal because of the music I make.  Black Sabbath are one of my top 5 bands, but Ive recently been listening to a fair amount of newer black metal recommended to me by a friend from New Zealand who is into a lot of interesting cinematic sort of metal.  My favourite thing he has lent me is an album called Doom of The Occult by a band called Necros Christos.

KS: With your background in classical music, who is your favorite composer?  Do you like any of the 20th Century composers?

Chelsea Nikkel: Because I am a pianist I tend to listen to a lot of works for solo piano.  In that respect I enjoy listening to different renditions of Bach’s solo piano works and I like Schubert’s work for solo piano a lot – particularly the impromptus.  As far as 20th Century composers go – I like playing Debussy and find Shostakovich very interesting although I’m not good enough to play his work.  I’m a fan of Philip Glass too.  I also like Hollywood composers Hans Zimmer and Alan Menken – the latter wrote “Under The Sea” from the Little Mermaid soundtrack.

KS: If you could work with anyone in the world, living or dead, who would it be?

KS: In their review of Lil’ Golden Book, Rachel Anderson heard a Residents influence in your work, and I can hear it too: Is that really there, or are we both just hearing things?

Chelsea Nikkel: I have never listened to the Residents before – I suppose I should check them out.

KS: You’ve made a number of videos for songs on the album — what is it you like about making music videos?

Chelsea Nikkel: I like the fact that they’re free to make and I don’t have any money.  I don’t know a lot about video making.

I made the video for “Ice Reign” myself and I really didn’t know what I was doing.  However, the process felt very similar to the process I go through creating and recording a song. When I create a song I am very aware of creating an aural atmosphere for the listener – mood is very important to me. So making videos feels like a natural progression – even if it’s a pretty naive one.

KS: What would you like to do that you’ve not had the chance yet?

Chelsea Nikkel: I’d like to tour Europe and Japan.  I’d like to do duets with more musicians and collab with some interesting producers.  I would like to hear my songs sampled on a great Hip-Hop track.

Chelsea Nikkel: My album has just been pressed on limited edition gold vinyl; it’s only $20!