[This interview was conducted in May of 2010, and was on the site for a while… but somehow disappeared.  So I’m posting it again. So check it out, perhaps for the very first time! – Ed.]

Paul Rugg‘s a great comedy cartoon writer; he’s done some great bits for Animaniacs (he wrote “Schnitzelbank”, f’rinstance) and Histeria!, but he’s also known for his voice work.  He had a great role as the villain in the pilot The Modifyers, he was also the villain in Dave The Barbarian and American Dragon: Jake Long, but perhaps his greatest role was where he played a hero — namely Freakazoid.  He also was one of the main writers and producers on Freakazoid! and with John P. McCann and was responsible for a good part of what made the show so magic.  Paul’s also worked with the Jim Henson company on a number of projects, and he’s currently working on a pilot for Nickelodeon.  He’s also got a great blog, Froynlaven — so, he’s got quite a bit going on — and just about all of it is a hoot and a half.  As someone who was addicted to Freakazoid! and one of those annoying guys who quotes it a lot, I was very happy when Paul agreed to an interview where he answered some of my long-held questions about the show — like what makes a Chubby Boy.

Paul Rugg: Hmmm. My favorite song now (and probably forever) is Jimmy Durante’s recording of “Make Someone Happy“. Sorry. I wish it was something more clever and hip. Alas…. 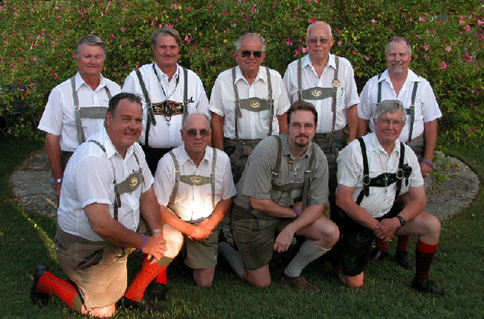 The guy second from the right in the top row is dope!!!!!

Paul Rugg: Surviving being a Ninja Turtle for childrens’ parties in my mid-20s.

Paul Rugg: How to Train Your Dragon (big thumbs up), Doubt, The First Men in the Moon.  Okay, the last two require an explanation. At Frys Electronics I found a boxed set of 100 sci-fi films for under 10 bucks. It’s a gold mine of goodness. I mean…GOLD! Gold! Ya Hear?!!!l   They are: Voyage to a Prehistoric Planet (a dubbed Soviet film of the 60’s that’s too good to explain) and Monster Island.

Paul Rugg: I own most of my 10 year-old daughter’s original works. The rest I cannot afford.

I know this sounds dumb, but I’ll link an example on my blog. It’s a lot of fun…and saved me on a flight to Australia with my daughter.

Paul Rugg: Pass me the butter.

5. Without Feathers by Woody Allen

Paul Rugg: Waiting for Nancy Pelosi to say something coherent.

Paul Rugg: Something we all sorta hang out in and sometimes it works.

Paul Rugg: Doing video games isn’t as much fun. Sometimes you just say the same thing a billion different ways. “Search here for power pellets! Good Luck! Awesome!”  Doing animation is usually more fun because you can really get into the character and have fun.

KS: Do you have a preference between writing and voice acting?

Paul Rugg: Writing is sorta lonely. You sit and ponder and think. Voice acting is always fast paced. But, to be honest, I think finishing a script has a bigger sense of accomplishment.

KS: Do you still do improv comedy like you did back at the ACME Comedy Theater?

Paul Rugg: I have been a part of Henson’s Puppet Up. It’s basically improv, but with puppets. We’ve performed the show at the Aspen Comedy Festival, the Fringe Festival in Scotland and in Australia in Sydney and Melbourne. I took some time off for a while, but I’ll be performing with the Henson Company in their new show, Stuffed And Unstrung, which is playing in New York City. It’ll be there some time in June.

KS: What percentage of Freakazoid! was improvised?

Paul Rugg: There were a few bits in the first season that were improvised. Many parts of the 1st episode, “Dance Of Doom” were improvised. We had a great script by John McCann, and we used all of it, but Tom Ruegger, our executive producer, wanted me to improvise around a bunch of the lines.

Another improved piece was in “Candle Jack” when Freakazoid stops the show and walked around complimenting all the actors. That’s just something I threw in.

The second season was pretty much all written. (And it’s my favorite season.)

KS: When you were improvising as Freakazoid, did the other actors improv with you?

Paul Rugg: Sometimes. But, usually, we would record everyone else’s dialogue first and when they were finished, I would usually go in there and do my lines. We did that so I could be in the studio and contribute my suggestions into the sessions.

KS: How much of the show came together in editing?

Paul Rugg: Well, that’s a good question. We would all choose our favorite takes and then the audio people would put it together. BUT…there was A LOT of editing once the show came back from overseas. We’d take a look and then try to figure out how to make them better. We had an amazing editor. His name was Al Breitenbach. We used to call him Uncle Al. He would work those episode over and over and over. He had a friend on the Warners lot that would send us hundreds of hours of stock footage. When we felt the show was lagging, we’d go through the footage and find the dumbest stuff we could.

Sometimes, we’d redo animation and have it sent back overseas if we felt we missed the joke.

KS: Were any bits written for other episodes, but cut and slotted in different episodes?

KS: Once and for all — what’s the difference between a Nerd and a Chubby Boy? Newt Gingrich is a Chubby Boy, but Bill Clinton was a Nerd, and he wasn’t exactly svelte — so Chubby Boy-ness seems to be more than just an overindulgence in pie.

Paul Rugg: No. Exactly. You understand perfectly. Yes. A Chubby Boy is more a state of mind.

KS: Do you have a favorite back-and-forth between Freakazoid and Cosgrove?

Paul Rugg: I think my favorites would be…

1. Cosgrove tells Freakazoid how much he likes meat.

2. The Bear Riding a Motorcycle.

3. Cosgrove and Freakazoid and Medieval Times.

KS: Freakazoid! had a lot of cool guest stars — was there anyone you really wanted for the show but couldn’t get?

Paul Rugg: I remember trying to get Andy Williams for “The Freakazoid” birthday episode. I don’t remember why. And, we did try to get Mike Meyers to be Roddy MacStew. We eventually hired Craig Ferguson and he hasn’t done too badly.

KS: Can you say anything about the new Nickelodeon pilot you recently mentioned in a video blog post?

KS: Do you think The Sam Plenty Cavalade Of Action Show Plus Singing! will return?

Paul Rugg: Drew Massey and I were talking about it the other day. Yes. He will return.

KS: How did you hook up with the Jim Henson Company?

Paul Rugg: When Freakazoid! was wrapping up, I wrote a pilot for them. They had stayed in touch with me over the years. When Brian Henson started his puppet improv workshop, they asked me to join because I had an improv background. That led to me being trained as a puppeteer and learning their HDPS digital puppetry system.

Brian Henson and I recently finished doing two characters for a series of PBS webisodes called, Wilson And Ditch.

KS: How far the prime-time Daffy Duck pilot get? Is there any chance of any parts of it appearing on the Internet?

Paul Rugg: I’d LOVE to let people see it. But here’s how it works. When you are a staff writer, everything you do is owned by the company. So, Warners would have to give their permission for me to let that script out. I could see…

KS: As a person behind a Daffy Duck show — did you see the Duck Dodgers TV series? What did you think of it?

Paul Rugg: To be honest, I never saw it. I know a lot of the people who worked on it. Daffy is probably my favorite character of all time and I know he’s out there waiting for someone to make him a star again.

Paul Rugg: My fingers are numb.