Cat, with their delcious natures, often surpass stupid human. One such cat is calling by Cooper, also knowing as The Photographer Cat. These cat attempting, and successful, at dominating worlds of photographics artform. Normally such cat would of course be obvious RIVAL, but in my role as journalisting I must appreciate such cat. Besides, possibilities existing for future using such cat for photojournalisting in my new MICKEY super websites, afterall these Kittysneezes.Com will eventually whithering and dying, and I intend to take over controlling on these fateful day (learning buzzard lessons). But for time being, I conducting interviewing with these Cooper. We discuss lifes as photographologist, philosophies, and cats lifes in general. These interviewings constitute another masterstroke for MICKEY. Enjoyings… 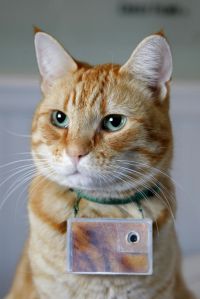 Cooper: Bon Iver always puts me in a warm, I-could-nap-anywhere kind of mood.

KS: What, if anything, is on any particular wall (of your choice) in your domicile?

Cooper: There are several large, framed photos that I have taken with my collar camera hanging in my house.

Cooper: A micro digital camera, as well as a miniature video camera, that I wear around my collar once a week.

KS: What are your top three movies?

Cooper: Planet Earth is pretty awesome. Especially the scenes with the swimming monkeys. I swatted at the TV screen but couldn’t catch them behind the glass. Cats might be tolerable if they had employed actual cats. What’s with the dumb monkeys in the cat suits? And finally, The Big Lebowski. How can that movie not make you purr?

Cooper: Everyday for about 3 or 4 hours before dinnertime, I have to wait and wait. It’s super boring waiting for the humans to realize that it’s time to eat.

Cooper: My humans make me what they call “special dinner.” It starts with my regular dry food (bought from the healthy pet store – not the junky stuff) and they add a little mushroom broth and warm it in the microwave. Oh my god – it’s amazing.

Cooper: Reality is the existence of many windows. But very few sunbeams.

Mickey: How did you becoming involvement towards photographies?

Cooper: At first I wasn’t too crazy about this idea of a camera being attached to my collar. I mean, I already had a name tag there. What’s next – a walkie-talkie? But as soon as I came home home with the camera, my humans (you know, the big hairless monkeys) gave me TONS of treats. I seriously dig the freeze-dried shrimp – I could eat them until I barf. Anyhow, I only wear the camera once a week, so I get to be “just a cat” for the rest of the time, which is cool. 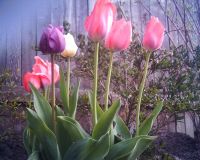 Mickey: What sorts of cameras are you making use towards? I tried photographies but paws don’t work so well, humans make camera for opposable thumb only, like many other thing, to prevent cat from ruling world.

Cooper: My humans found my camera at Mr. Lee’s Cat-Cam. It is a complicated little camera, but much better than the other ones on the market. It operates on a timer, so it snaps a new picture every two minutes. This is awesome, because while I’m chasing a squirrel I don’t have to remember to stop for a Kodak moment; it just documents my adventures as I go.

Mickey: When human tries to put something on me, like hats or any clothings, I get furious with righteous kitty rage. I seeing you having to wear these cameras, and wondering if these making you angry ever?

Cooper: The camera is super lightweight, so it doesn’t get in my way. If you’ve seen the videos of me running outside, you’ll know that it doesn’t prevent me from going where I want to go or hanging out with my feline pals (although they do tease me a little for wearing it). But trust me – wearing it is worth it for all the freeze-dried shrimp.

Mickey: Some humans saying that taking picture means you stealing souls. Sometimes you taking pictures of peoples or cat, so where do you keep these soul after stealing? Considering possibilities of bartering these with devils? Many mouse could be achieved in these regards, if you do indeed have these souls.

Cooper: I don’t believe you can actually steal someone’s soul, though they are bought and sold all the time. But I’ll tell you what – you want to barter for mice? Humans will trade just about anything in exchange for me not posting their naked picture on my blog! 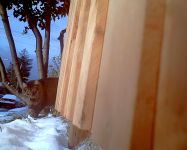 Mickey: How does questing towards photographics truth relate towards eternal hunt for mouse?

Cooper: Your point is a good one. The eternal mouse hunt is much like the quest for photographic truth; both require investing your entire self. But mice taste better.

Mickey: Did you ever becoming interest towards other visual artistry, such as paintings or sculpturings?

Cooper: My other artwork includes video – you may have seen the movies I have shot on my website – and sculptures I have created in my litter box.

Mickey: What are you doing with these monies made from photographies proceeds? Fish? Mouse?

Cooper: Not many humans have bought my framed photos. But of the few that have sold, about 30% goes to the gallery, about 30% goes to pay for the costs of the prints, frames and mattes, 10% is donated to PAWS animal shelter, 15% goes to buy me food and treats, and the rest I’ve hidden under a stuffed lion in the closet… saving for a Mini Coop someday.

Mickey: You ever consider emancipations from your humans, striking out on your own, towards larger profit?

Cooper: Dude. No humans, no freeze-dried shrimp. It’s that simple.

Cooper: I love reading all the fan mail… it’s like I’m getting chin scratches from all over the world! Fan groupies are the best. Especially when they send catnip. But of course in the millions of cyber-peeps (not to mention my 8,000 Facebook fans) there are a handful of folks who don’t like me or my photography project. And that’s okay – you can’t please everyone. Curling up to the heater and taking a little nap helps me forget my feline stresses, and even what day it is. 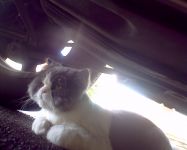 Mickey: While you famous cat, you also less famous than some these human photographer – do you think these conspiracies mouse behind, or just human behind plot?

Cooper: If there is indeed a conspiracy, I don’t know who is behind it. But I’ll tell you something about fame: Don’t ever wish to become famous. It only works if you wish to become RICH and famous, otherwise you’ll end up like me.

Mickey: I hearing that you recently become roommate with humans baby. Do you consider RIVAL?

Cooper: No, my brother is cool. We’re cool. And I’m not angry about his arrival. Just surprised is all… he doesn’t even have a tail!

Mickey: Are you related towards Andersons Cooper, the famous cat posing as human television anchoring?

Cooper: No relation. But it’s funny you mention him – he keeps emailing me, asking to do a private photo session. If Campbell Brown were asking, it would be a different story. Meow!

Mickey: Finally, is there any last word you would like to make?

Cooper: I want to say thanks for all the great questions, Mickey! This was fun. Please continue to check out my blog: www.PhotographerCat.com

Photo Credits, in order of appearance: #1 (picture of Cooper) by Andy Rogers, #2 (Cooper and family) by Kevin Law, and #3-6 (photos by Cooper) by Cooper Cat.

Mickey Smitherson is a 10 year-old domestic longhair cat currently living in Cat(hedral) City, California. Spending most days hunting for crickets, sleeping, and obsessing over his many and varied rivals (or, as he describes, “RIVAL”), he began a career in writing (or “journalisting”) only a few short months ago. While this might not seem the most obvious choice given his appalling grammar and English composition skills, what he lacks for in skill he makes up for in confident conceit and an insatiable hunger for the truth. Shortly after beginning his writing career, he declared himself “King of Kitty.” A coronation ceremony is set for March, 2010.