Most people just work on one album at a time — Alexx Calise, on the other hand, has two albums due to release this February. One is her second solo album, and the other is the debut release of her band Sound of Cancer with Dennis Morehouse. You may have heard Alexx in ads for the show One Tree Hill or on MTV and VH1 — among many other places — or seen her in the book How to Succeed as a Female Guitarist

. So, yeah — she’s pretty busy. Somehow she found time to do an interview with Kittysneezes — and here it is!

Alexx Calise: I have some really great gothic accents on my walls. I especially love my kitchen clock. I have an affinity for tarnished or distressed looking pieces. 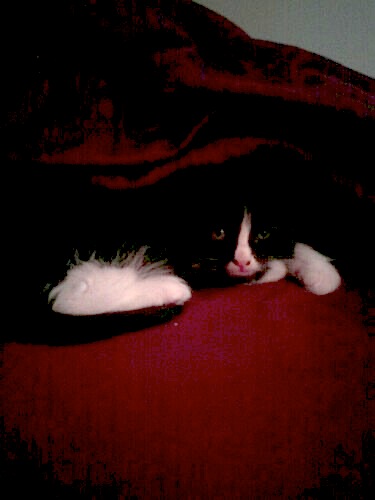 Alexx Calise: I suppose my favorite time was when I was on tour in Boston with my band. We made some great friends, played some great shows, and got the hell out of dodge for a while, which was really awesome.

, He’s Just Not That Into You

KS: What are your top three movies?

Alexx Calise: My own! I love painting.

KS: What are your five favorite books in the world?

by Janet Fitch, anything by Steven Covey

KS: What are your favorite meals?

Alexx Calise: Hopefully it isn’t what I’m experiencing now, because to be quite honest, it’s pretty scary.

KS: Where did the name “Sound of Cancer” come from?

Alexx Calise: The band is named after our zodiac signs. Dennis Morehouse and I are both Cancers.

KS: How did the initial collaboration with Dennis Morehouse come together?

Alexx Calise: Dennis approached me for help on a song for the indie film “In My Pocket” (starring Everwood’s Gregory Smith) about a year or two ago. Neither of us really had the intention of starting a band together because we were both involved in our own projects, but when we started working together, we found that we just clicked (much like we do as people), and that our drastically different musical styles really married each other. It’s that contrast and conflict that really makes SOC work.

KS: I read that Sound of Cancer is much more in the way of live-in-studio like the older way of recording — are you recording it on tape or a digital audio workstation (DAW)? If a DAW, do you ever have the temptation to “fix” anything since it’s much easier on that than analog?

Alexx Calise: We’re recording everything on a DAW (Logic to be exact). Sure, it’s really tempting to “fix” things because it’s easier and less time consuming, but we’re making a conscious effort to do everything live. Just because something isn’t perfect doesn’t mean it isn’t good.

Some of the greatest albums ever recorded are littered with pops, hisses, and mistakes, yet they’re still selling. There’s a reason for that: they’re real.

KS: How do you think the industry could get people to buy more physical releases like CDs — or is that even possible?

Alexx Calise: I think Pandora’s Box has already been opened. No one is really buying physical product anymore because music is so easily accessible (and free) online. The industry (major labels specifically) first has to come to terms with that reality, and then come up with some new, innovative ways to market artists.

The fact of the matter is, artists don’t really make a lot of money selling CDs anymore. Most of their income is now generated via touring revenue and merch sales.

KS: Do you have a dream producer you’d love to work with if money were no object?

Alexx Calise: I’d really, really like to work with Linda Perry. It seems that everything she touches turns to gold. She has an amazing ear, and her melodies are always so memorable. I think our styles would really marry each other because I always write with melody in mind as well.

KS: What is the biggest surprise one would find in your record collection?

KS: Do you enjoy making videos?

Alexx Calise: Yes! It’s an incredible experience because you get to bring your song to life. I guess you could say it’s a form of performance art.

KS: Do you think music videos are still as good a promotional tool as they were in the days of MTV’s start?

Alexx Calise: Well, they’re definitely not as crucial as they used to be, but they certainly can’t hurt you either. They’re very helpful in the regard that fans and potential colleagues can put a face to a name and see you in action, but there aren’t many broadcast outlets that will air it anymore. However, what you can do is post it up on your websites and YouTube, distribute it virally, and use it for your press kit.

KS: How long did your first album take to record?

KS: How long has the second album taken to create?

Alexx Calise: The second album has taken a little over a year to create. It has been quite a grueling process. One of our songs, “Vamp,” (which is also one of the most heavily orchestrated compositions we’ve written) took us several months to craft. We kept throwing things out, putting them back in, and reworking parts until we were blue in the face. The end result, however, left us with our mouths hanging open. It’s hard to believe we created something this powerful by ourselves.

KS: If you could only do one — solo work or band work like Sound of Cancer — which would you choose?

Alexx Calise: Wow, that’s a tough one. What I do like about both projects is that they’re both different shades of me. “Alexx Calise” satiates my “pop/rock” side, and Sound of Cancer satisfies my dark, existential side.

While I absolutely love making music for SOC though, “Alexx Calise” is my insurance policy of sorts. I know I’ll always, always have that, because after all, I couldn’t break up with myself.

KS: Do you have anything else you’d like to add?

Alexx Calise: I will be releasing my 2nd solo album, and the debut album from my other project, Sound of Cancer this February! Both will be available at www.alexxcalise.com, www.soundofcancer.com and many other major online music retailers.