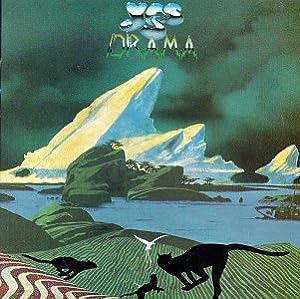 Yes is one of the big, fat, dumb, lumbering dinosaurs of Progressive Rock. They’re still around, still doing long, drawn out prog-rock numbers with classical influences, sci-fi/fantasy lyrics, and Roger Dean is still painting their album covers, it would seem. If you don’t know them for their stuff like “Close to the Edge”, “I’ve Seen All Good People”, or “Roundabout”, chances are you know them for their big hit during a brief period of New Wave infatuation: “Owner of a Lonely Heart”. The above is a bit more slag-offish than I mean, here. I’m a Yes fan. I’m not hugely into Yes, I wouldn’t bother to see them live, but they’ve put together some classic records. Either way, if you know anything about Classic Rock or Progressive Rock, you know about Yes… so how can they have a forgotten album?!

The time is 1979. Yes’s most recent record, Tormato

is a bit of a flop. There’s stress in the band over creative differences and money. The two main, central figures of the band decide to quit: Jon Anderson (vocals) and Rick “The Six Wives of Henry the 8th” Wakeman (keyboard). The remaining members try to go on as a group called Cinema, but there’s something missing from their studio sessions.

In the same studio as Cinema, another band was struggling to put together a follow-up to their success “Video Killed the Radio Star“. They are the Buggles, and they’re fans of Yes. They’re Trevor Horn, a bassist/vocalist, and Geoff Downes, a keyboardist. Somehow, they join forces: the prog-rock dinosaur, and the young new wave band with a big hit single under their belt. The result is Drama, the lone album by a bizarre lineup calling themselves Yes.

Half prog-rock, half new wave influenced rock and roll, Drama is the missing link between their pop 90125

and the prog stuff that preceded. “Machine Messiah” is Yes-by-numbers, a 10 minute epic with sci-fi lyrics, but a seriously crunchy rhythm section?and a little crib on “Welcome to the Machine” by Pink Floyd. The followup, “White Car” (inspired by Gary Numan‘s white Porche) is melancholy and short. In concert, though, it turned into a prog-rock keyboard jam which managed to squeeze in a few bars of “Video Killed the Radio Star”, probably to the confusion or consternation of the audience.

“Does it Really Happen?”, “Into the Lens”, and “Run Through the Light” are quality compositions, balancing that prog thing and the Buggles’ new wave sensibilities, but the album’s closer “Tempus Fugit” is the real gem. More punk than “Owner of a Lonely Heart”, it really shows the power of both Yes’s rhythm section and really embodies the balance of songcraft between the two sides of the band.

If there’s any problem with the album, it’s that it was too prog for Buggles fans, and too shockingly new wave for Yes fans. It didn’t go over well, which is a shame. It’s certainly something to approach with an open mind. Yes broke up again after the Drama tour, a tour which gave Horn nightmares from angry fans, and reformed with Jon Anderson to make 90125, which got a production job by Mr. Horn, establishing him as a producer of world renown. Meanwhile, aside from getting a spiffy remaster with Rhino’s reissues of Yes’s back catalog, it’s been quietly ignored.