Well, it’s certainly been a while. If it’s any consolation, the downtime has allowed me to dig in the stacks and find a real rare gem. You won’t find this little bugger on CD on Amazon.com any time soon. No, friends, this one’s a vinyl-only (or ripped MP3) New Wave gem from 1981: Suburban Lawns.

First making an impact in 1979 with a single “Gidget Goes to Hell,” which can be found on various compilation CDs of New Wave and Punk singles, they certainly sounded like something else. Part Surf-rock, part nervous New Wave like DEVO or Talking Heads, and with a vocalist not unlike Nico on helium: Sixteen-year old Su Tissue. The album is much in the same vein, though with vocal duties alternately shared by John Gleur.

Opening with the synth-driven madness of “Flying Saucer Safari,” a mishmash of sci-fi and grocery-list lyrics over a hyperactive synth-line and taught rhythm, sung by Tissue, Suburban Lawns grabs you by the head and make you listen. The entire first side beyond this is a series of dark, nervous, quirky New Wave tracks. “Gossip” is particularly creepy with the chanted chorus: “Lies. Paradox. A blade of grass.” All of these tracks, save for “Not Allowed,” and “Protection” are played at almost hyperspeed.
buy doxycycline online buy doxycycline online generic

There is not a single number on this record longer than 3 minutes. 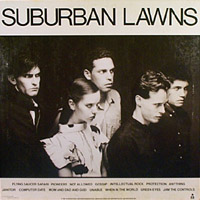 Side two’s starter, “Janitor,” is the high point of the entire exercise. A bouncy punk rock tune with the strangest chorus you’ll ever hear on a record: “Oh my genitals! I’m a janitor!” juxtaposed with Chernobyl-paranoia. “All action is reaction / Expansion, contraction… / Does it matter? / Nuclear reactor / Boom! Boom! Boom! Boom!” “Computer Date” is an equally bouncy tune singing the praises of technology and mating, surprisingly lacking in sinister overtones.

The entire event is barely over 27 minutes, a little more than your average sitcom. Fourteen tracks, nervous, wild, and lost to time. The Lawns put out an EP called Baby after this, with a more synth-heavy sound, as was the style at the time, then vanished into the ether. Relics still float about: there’s a music video for “Janitor” on YouTube, a little blurb on a website for IRS Records, and a Wikipedia entry. None of their stuff, save for “Gidget Goes to Hell” is on legit CD. Do what you can to track this one down.