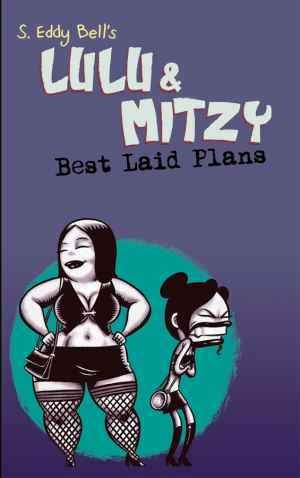 Bell’s art style combines the cartooniness of early Mad with the clean lines of more modern cartooning. I’ve read comparisons of Bell’s work with Peter Bagge‘s — there are some similarities in the cartooniness of the styles, but I don’t think the comparison is particularly apt. There can be a darkness and seeming bitterness to Bagge’s style that is not seen in Bell’s work, which seems to have a somewhat more optimistic feeling, even though the subject matter — two illegal immigrants pushed into prostitution in the Tenderloin district of San Francisco — isn’t exactly sunshine and lollipops. But there IS a weird sense of optimism here — perhaps it’s in the humor that flows organically from the situations. But it’s not a crass cash-in of the “let’s make fun of people worse off than us” type; both Lulu and Mitzy as characters are intelligent, crafty, likeable, and above all else, fleshed out into real people.

Lulu & Mitzy isn’t a straight comedy, either — there’s a definite sense of the real as well, and, like the comedy, also flows organically; the tragic denouement of the book does not feel tacked on — in fact, the sequence running from page 112-118 is a masterpiece — particularly the transition at the bottom of page 116 of Mitzy from cartoon character to real person juxtaposed with the ultra-cartoony violence of the next page. Bell uses the mix of cartoony action with the semi-photo-realistic to give his characters an earned depth that makes the reader think and connect with the story as more than just goofy slapstick. The back of the book says “Imagine if Lucy and Ethel worked in the world’s oldest profession” — both a good description and a poor one; good in that it does grab the almost sitcomish style of the story, but poor in that one never really grew to know Lucy or Ethel; they were cardboard cutouts in the service of jokes. Lulu and Mitzy are characters — jokes and comedy happen to them, and around them, but they’re not comedic vessels at their core.

I’m glad that the spine of Best Laid Plans indicates that this is Volume 1; I cannot wait for more of Lulu & Mitzy; luckily, in the meantime, S. Eddy Bell’s website, Fictionbox, is running webcomics featuring the duo — so that will at least help out until the next volume is ready.