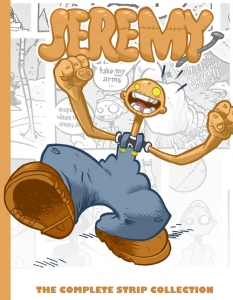 Full disclosure here, folks — I’ve known Calamity Jon online for a few years now, and before I knew him, I did a piece on Gone & Forgotten, his Classic Comic Makin’ Fun Of Site, for my college TV station. Which was, man, probably back in 1999? Somethin’ like that. Maybe 2000? So, what I’m saying here is I’m probably a bit pre-disposed to like his work.

HOWEVER — I do like to think of myself as relatively fair-minded and that I would be honest about what I thought of the book regardless of whether or not I know the guy who wrote it. So, here goes.

No, wait! That’s not right. I can honestly say that if I had just stumbled across Jeremy, I would have fallen as strongly in love with the strips as I have. Actually — here’s a weird bit of disclosure — in spite of knowing Calamity Jon for so long… I’ve never actually READ Jeremy, the work he’s probably most known for, until I got the book. I don’t know what my excuse is. Perhaps I’m just a nut. I don’t know. And, well, I mention this here just to show you how wrong I can be. Jeremy is wonderful.

When I got the book, I instantly showed it to my mother, as she’s a fan of cartoon art and whatnot, and she immediately exclaimed “GREAT ART!” — which is surprising to me — a lot of the cartoonists I show her, she’ll remark on the general quality of the art, but she’s very rarely wowed like that. She’ll talk on the undeniable talent of Daniel Clowes, for example, but even HE didn’t get any sort of outburst. She loves Sam Brown of Exploding Dog, but he just gets well thought out “That’s a great piece of work” type statements. Nothing that leaves her gobsmacked. So, that’s a pretty good endorsement there.

The writing is excellent as well — as Calamity Jon’s writing always is. After all, it’s through his writing that I got introduced to him, so I wouldn’t expect anything less. But the way Jeremy is written is outstanding. It’s about a child Frankenstein’s Monster (or, Frankenstein-American), built by his dad out of criminal corpse parts. And he just turned nine. The remarkable thing — Jeremy isn’t a naif, mystified by the machinations of the modern world, perhaps prone to revealing an universal truth through a mispronunciation. Jeremy is a real little kid… albeit one made of criminal corpse parts. Like real little kids, Jeremy (and his friends) are a lot hipper than folks’d give him credit for. Just because he’s not even 10 doesn’t mean he doesn’t know how the world works and that he gets things folks wouldn’t expect him to. He’s clever and mischievous, sort of like Calvin, if Calvin’s dad had a basement full of unholy objects. And if Hobbes were a zombie housecat in a box, or perhaps a disembodied, living head. Like all little kids, or at least the cool ones, Jeremy’s got his own slant on the world around him — he’s used to the mobs with torches and pitchforks, and, heck, deserving of them sometimes — so he’s able to appreciate other things, like meeting a new friend and finding a cool hat in the process of outwitting them.

Of course, the hallmark of any great strip is an emotional resonance with the characters. A good strip can deliver great writing and punchlines, even if the characters themselves are just cardboard cutouts to deliver the great writing — however, only a good strip makes you feel for the characters and ache for them. The Father’s Day story, where Jeremy makes his dad a wife for a gift is hilarious, yet heartbreaking. The last page is beautiful. It’s one of those moments in comics — particularly funny ones — that people can show to folks who are of the “Oh, comics aren’t literature” mindset and go “SEE, NO. YOU’RE WRONG.”

I suppose, in a perfect world, Jeremy would have been picked up by, say, Random House’s comic imprint and Calamity Jon would be a billionaire of comics, or, well, at least be able to say “Hey, I got a deal with Random House!”, but that’s OK that he’s not. He’s self-published Jeremy through Lulu.com, and they actually did a really good job. Not only my first exposure to Jeremy, this is my first exposure to a Lulu product, and I must say they did a fine job. The printing is clear, nicely printed and published on good paper. So, hey, if you’re unsure about Lulu, this is a great book to test them out on. And it makes me think that if you’ve got a graphic novel you wanna print, hey, you could do worse!