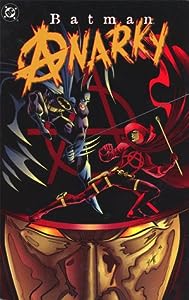 Anarky is a DC Comics collection of some of the stories featuring that character that ran in some of the Batman titles. The stories are all written by Alan Grant, the creator of the character; sometimes thought of as a Batman villain, initially thought of as a potential Robin replacement, and a philosophical vigilante like Batman himself. Anarky, as implied by his name, takes his prinicples from the ideals of anarchy (in the political sense rather than the straight definition of chaos coming from a lack of leaders). Perhaps the most interesting thing about Anarky is that he started out as a 12-year-old in a suit featuring a fake head to make him appear taller. His previous MO was to take complaints from the Letters To The Editor page from the Gotham Gazette and solve them in his own way. Later, however, he grew into his costume and ended up working for more idealistic goals rather than on the streets one at a time.

Sadly, I found that the character lost some of my interest when this happened — which was the exact opposite of what Alan Grant was trying for in his introduction. However, the stories are still interesting — and while the four-part miniseries collected at the end of the book is a culmination of where I think the character went wrong, it’s still a gripping story.

This isn’t a perfect book — far from it, in fact. Some of Alan Grant’s writing reads like a poor man’s Alan Moore (Grant does mention V for Vendetta

as an influence — which’d be hard to miss, particularly with Anarky’s costume), and some of it becomes a little laughable in places — for example, I found it odd that Ayn Rand was one of Anarky’s influential authors given her pro-ultra-capitalism stance… not to mention the parts where he lectures his dog in anarchism. However, it is still an interesting book and provides one a lot to chew on. After reading it, I did still think quite a bit about it and what Grant (a member of the British Anarchist Party, at least at the time) had to say. The book nor character come off as particularly preachy (perhaps the dog-lectures are good at popping that particular pomposity), and Anarky himself has a good sense of humor that matches the mindset of a smart, cocky teenager.

Most of the stories are good — my favorites, as mentioned were the earlier ones where Anarky was fighting lower-level baddies and much more kid-like. The only one that didn’t click at all for me was the arc where he fakes his own death. Neither Batman nor Anarky in that story come off as particularly likeable (Anarky kind of a smart-ass knowitall and Batman as a patronizing jerk — or rather, while Batman does in most all of the Anarky stories, much more so in this particular one), and part of the plot didn’t make sense unless you’d read it in the original storyline when it came out — a problem that could have been averted with a quick rundown of what happened explaining why Robin was back, Commissioner Gordon was out of a job and going through a divorce and all the other stuff that was just assumed to be known. I kept flipping through that story wondering if I’d missed something. However, given how that story provided a big point of Anarky’s career, it couldn’t be left out — but a page of text prefacing it might have been polite.

It may sound that I’m being rather hard on this book — and perhaps I am — but it’s one that I do still recommend. Flawed though it is, it’s clear that SOMETHING is going on there — this isn’t just a standard superhero book of biff-bam-pow, but an attempt to shoehorn political ideas in one of the flagship titles. It could be both much better than it is and much worse, depending on the writer. Alan Grant is not the best writer to come to superhero comics, nor is he even close to being the worst. Perhaps Anarky would have been better handled by a Moore or Morrison, but Grant does admirably as well… even if I like the character better as created rather than he evolved to be.