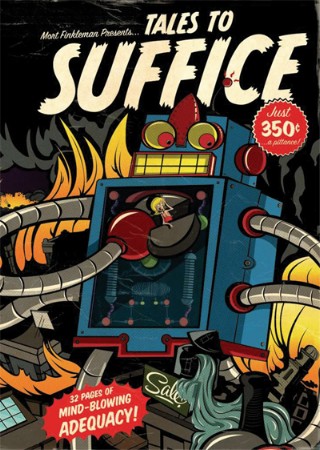 These days, comic books are usually printed on higher-quality paper than they used to be and have a generally glossier look, which can help us appreciate their finer details or make all the more glaring their flaws. It can also have the effect of fooling the inattentive consumer into thinking they’ve picked up something other than what they actually walk away with. But anyone who mistakes “Tales To Suffice” with a serious graphic work would have to be legally blind.

“32 pages of mind-blowing ADEQUACY!” the cover promises us, and this is essentially what we get, if you find foul-mouthed adult humor to be adequate. There is no nudity or sexual content and no actual violence, but there’s certainly enough strong language to make it worthwhile to warn parents not to let the young ‘uns get their hands on this baby. Not that kids would be likely to appreciate some of the humor anyway, as it depends, among other things, on a basic familiarity with conventional plot devices, twists and of course cliches of the comic book world.

Now, I like comics of all kinds; you could say comics are a major element of my life. So who better to sit down and read a funnybook that costs the mere pittance of three hundred and ninety-five cents?

Mort Finkleman himself greets us as we open the book, insisting we call him “Uncle Morty” and inviting us along for what he promises is a grand investment opportunity. In an amusing parody of Raiders of the Lost Ark, Uncle Morty raids a tomb to replace “Tales To Suffice” with a copy of the works of Shakespeare and promises us an enjoyable read, all the while erroneously referring to his guide, Kenny, as Pedro and being gleefully casual about the danger he is putting them both in. After his rather long-winded introduction (Kenny himself even asks at one point if Finkleman ever shuts up), we are treated to four short features.

“Love On The Rocks” is satirical of old science-fiction pulp comics and stories, featuring a robot kidnapping a girl and carrying her off into a swamp. To the rescue comes Ray Gunn, a spindly daredevil who looks like the bastard lovechild of The Flash and Domino’s “Noid” character. The dryly humorous narration and colorful art make what is a story with a rather predictable twist quite fun to read, though certainly anyone who doesn’t enjoy this sort of thing will be rolling their eyes long before the conclusion.

Following that is a segment called “Read At Your Own Risk,” which is about the immense danger involved in reading comic books. At times black-and-white and at times fully colored, this story presents two very different but very comic-booky styles as the owner of a comic book shop tells a tale of loss to two snot-nosed kids. His tale is just as predictable as the previous story, but the manner in which it is told gives it a bit of freshness, and there’s a nice little gag in the final panel that was not seen coming as easily.

The third segment, a black-and-white two-pager entitled “Corporate Zombie!” depends entirely upon its situation and dialogue to carry it as the art is largely copy-and-paste, but this is fine because it gave me the first laugh-out-loud moment I had reading “Tales To Suffice,” and has the the quality of a good Saturday Night Live sketch (ironic considering Saturday Night Live itself has lacked said quality for years). When the zombie applying for a job is asked what he can bring to the company, his reply of “BRAAAAAAAAAIIIIIIIINS” is met with, “Well, we could certainly use more of THAT around here!”

Finally, we have part one of a story called “Humble Origins,” starring a superhero called The Red Atom. Though just as spindly as Ray Gunn (and carrying a bit of a gut), The Red Atom commands a bit more respect, if only because his noirish narration feels far less cliched and, in general, cleverer than Ray Gunn’s sitcom-inspired dialogue. Of course, with this being only part one, we’re left hanging as to where The Red Atom is going with his little tale, but at least we have plenty of time to be entertained by his amateurish path to superherodom (“I hope this thing doesn’t chafe,” he says as he admires himself in the mirror) and his commitment to duty (“I really must update my blog more often!”).

If you’re looking for a comic with a good, gripping story, realistic art, or sexy babes, keep looking. But if you enjoy colorful, cartoony art and a generous helping of dry and situational humor, you will likely enjoy “Tales To Suffice.” And when you’re done, Jeeves (“My name is Gary, sir.”) will show you out.