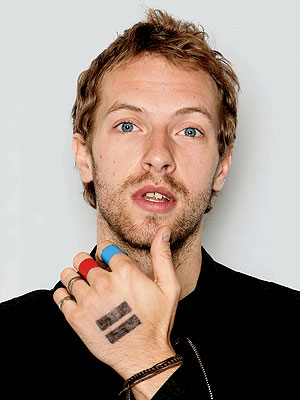 I know this statement is going to break (and indeed parboil) the heart of one of my dearest friends, but I can stay in the closet no longer: I like Coldplay. They’re not my favorite band in the world (not while Imperial Stars are still out there, anyway), but I like ‘em. I grew up in the earnest 80s. I like big, soaring anthems, pompous intentions and singalong choruses. They’re The Alarm with better hair. If U2 was my heroin, Coldplay is my generic Wal-Mart arena-rock methadone. And I ain’t kickin’ this soapy corporate skag for nobody.

James Urbaniak, as anybody knows, is the dean of American character actors. “Urbo”, as his friends playfully call him, stars in the best show on television, The Venture Bros, and has built a well-respected and very entertaining career playing weirdos, perverts, savants, and pizza delivery gentlemen of surprising depth and courage. He’s had a daring, original career. He is the anti-Coldplay. People copy Urbo. Urbo does not copy people.

These two titans now square off in that most cutthroat of artistic arenas: the Christmas Single. Who will triumph? TWO SONGS ENTER!

Coldplay’s “Christmas Lights” is steely-eyed fop Chris Martin at his best: anthemic, soaring, the kind of thing that would make huge crowds ignite their lighters in communal celebration, if all forms of open flame had not been banned when the atmosphere turned to pure methane last summer.  Somewhere, Bono is garroting a simple villager in blinding, white-hot envy.  Or green-hot envy. Hot green soupy rage. With a side of…something something Spiderman.  Urbaniak’s titular-curveball “James Urbaniak Christmas Song”, meanwhile, is an idyllic Norman Rockwell home-and-hearth Christmas message demanding that Hollywood’s Dickensian casting directors employ the poor sonofabitch posthaste. Let’s look at the metrics.

Sentiment: Coldplay’s heart-stirring message of love and…second chances, or something?…is bound to move ill-defined hearts across the globe. Mushy Martin’s vaguely romantic high-school-boyfriend love letter will ring up the ditsy teenage girl in all of us, leaving us totally unable to decide who hangs up first. Urbaniak, meanwhile, reaches out to the unemployed masses starving in the debris-scattered American streets with a profanity-laced tirade demanding a guest spot of “Community.” Advantage: Coldplay.

Composition: “Christmas Lights” pulls out all the compositional stops, from time-and-key changes to mandatory singalong choruses to the soft-loud-soft dynamic that’s driven every hit since Jim Steinman breach-birthed “Total Eclipse Of The Heart”. It should be the music at the end of a really really moving “Doctor Who” episode. By contrast, Urbaniak and Jonathan Dinerstein’s composition embraces the classic American songbook, incorporating well-loved Christmas and Broadway motifs that compare favorably to the work of Jule Styne and Bob Merrill, who doubtless regret their ill-considered 1963 decision to remove the word “motherfucking” from the original title of “Don’t Rain On My Parade”. Tie Score—No Points Awarded

Cultural Impact: Urbaniak is a beloved character actor and blogger whose work has been critically acclaimed by the effete cultural elites who labor night and day to sell the freedom-loving American populace into totalitarian servitude, but—and this should come as no surprise since he just wrote a fucking song about it—he has yet to really break through to the NASCAR-and-Fritos set. Chris Martin, on the other hand, is a member of the infamous trilateral commission and has already transmitted “Christmas Lights” into your pineal gland and debited your bank account £1.79 for the privilege. You’re hearing it again, now, in your head, commanding that you go see Gwyneth Paltrow in that thing where she’s a country singer, even though the closest she’s ever been to the south is that time she was rolling on E and ended up at a Houlihan’s in Bayonne, New Jersey—birthplace of James Urbaniak. Advantage: Coldplay.

Watch That Man: On TV’s Venture Bros, Urbaniak stars as Rusty Venture, a dissolute, morally-compromised superscientist whose most successful formulation is a recipe for failure. Urbaniak also voices a variety of other characters, including a convincing impression of David Bowie. Martin mostly spends his time doing a somewhat less-convincing impression of Sting. Advantage: Urbzilla.

Face it: these are both two great Christmas songs, written and performed by two of contemporary culture’s most talented artists. Still, there must be some way to decide this thing. Ah yes. I give you…

Closeness To Our Lord Christ, Whose Birth We Incorrectly Celebrate Around Now: Chris Martin’s full first name is Christopher. The word Christ is literally contained within his name. BEAT THAT, URBANIAK!

…but oh, gingersnap: James Urbaniak’s middle name is “Christian”. From the Greek “??????????”, literally “follower of Christ”. By comparison, “Christopher” sounds like some kind of unholy Christ-Gopher hybrid. Oh sure, in cartoonland Dr. Venture might not be above fusing gametes to create some kind of cheap Caddyshack Messiah, but this is real life. And in real life, Chris Martin? James Urbaniak just kicked your ass. Game, set, match: Urbaniak.

“The James Urbaniak Christmas Song” is available at http://www.asitecalledfred.com/fred-holiday-singles-2010/

*author’s disclaimer: Cait Brennan “met” James Urbaniak on the Live Journal in 2004 and has not shut up about it since.