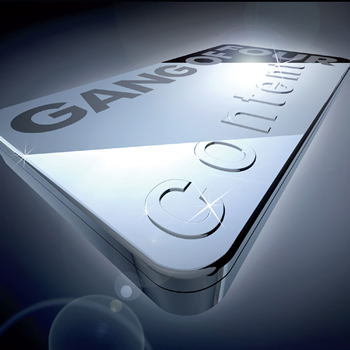 It’s been 16 years since Gang of Four released an album of new material, and a good 28 years since what is considered to be their last good album, 1983’s Hard. They did put out a couple albums in the early 90s, but the consensus is that they are best left forgotten. Now seems like an apt time for new music by Gang of Four, too. 2011 echoes 1978—war in Afghanistan, a screwed up global economy, and angry, disaffected youth. 1978 was the year Gang of Four released their landmark “Damaged Goods” EP. The music on it was a stark, angry, politically charged melange of punk rock with the taught rhythm of reggae. Sadly, it got overshadowed in the popular consciousness by another band that fused punk and reggae and had a singer with an annoyingly high voice. You know who I’m talking about.

In any case, no matter how much 2011 seems like 1978, there’s no guarantee that Gang of Four can maintain their relevancy. Though they get points for effort, Content stumbles out of the gate. The album has antithetically slick production values that are all the more apparent when compared to the band’s landmark releases like Entertainment! and Solid Gold. It’s so slick that, at times, it comes off sounding more like an album by Franz Ferdinand than Gang of Four.[1] I’m sure the lyrics are as meaty as anything off those classic records, but it’s so hard to pay attention to them with the rich sheen of production that coats each track in the aural equivalent of a thick, shiny plastic finish. One look at the seemingly inexplicable album cover with its excessive Photoshopped lens flare gives you a visual equivalent. The cover makes a bit more sense when you see the Deluxe Box packaging: a big metal case, containing a poster, a couple books, and a vial of the band’s blood.[2] It’s postured as an artistic statement about the way music has been decoupled from physical product, and so on and so forth. I hope they didn’t use that justification for the album’s production.

Right out of the gate, on “She Said ‘You Made a Thing of Me’,” Content trips up. What seemingly intends to be one of the traditional, sharp guitar chord intros to a Gang of Four song comes off as mere muddled noise. Where a track like “Natural’s Not In It” would have sharp, buzzsaw guitar ringing clear out of your speakers, “She Said…” Simply provides a dull rumble of deliberately muffled riffs. Somewhere in there is Andy Gill’s famous jagged guitar playing, but you’d need a jackhammer to cut through the production to find it. It does get a little better after this. While “You Don’t Have to Be Mad” plays truer to form, the thudding percussion forces Gill’s guitar almost to the back of the mix. Only the vocals are lower. For a band whose lyrics and guitar are most of the appeal, this is a decision that simply boggles the mind. “Who am I?” and “I Can’t Forget Your Lonely Face” are further improvements, marred only by the hyper-contemporary production. By the time you get to “I Party All the Time” you might almost get comfortable with the album.

Then, you end up with a track like the plodding “A Fruitfly in the Beehive” and that followed by the biggest misstep on the record: “It Was Never Gonna Turn Out Too Good.” That particular number is even slower and duller—and is sung through an entirely out of place vocoder that robs John King of any emotion or vocal power.[3] At least it’s the shortest track on the album, but the pairing of the two just drags Content down. They’re an albatross that the otherwise passable “Do As I Say” can’t fix. Perhaps it could if the lyrics were just a little less clichéd. At least the album closer “I Can See From Far Away,” though a slower number, feels more like the Gang of Four of old, and the Deluxe Edition bonus track “Second Life” is much the same as the higher points on the album.

So, yes, I am disappointed. There’s so much potential for, if not greatness, then at least an album on par with something like Songs of the Free. It’s just the god-awful production. I mean, we’re talking about a band whose most amazing technological wizardry on their first release was the dual channel vocals on “Anthrax.” I simply can’t explain why they’ve tried so hard to make this album sound like something that blends in with the morass of this decade’s overproduced junk-rock. Is it a sarcastic artistic statement about modern music, or is it a crass attempt at trying to appeal to modern listeners? Is it both? I’d prefer to think of it as simply a mistake. I’ll actually be seeing Gang of Four in concert on February 5th, and I want them to play some of the songs off this album with the expectation that once stripped of the muddle and production, they’ll actually stand up with their earlier work. Without knowing that for sure, I have to reserve my final judgment of Content. As it stands with the information at hand, Content is far from essential, but if you like Gang of Four, it’s worth spinning at least once.