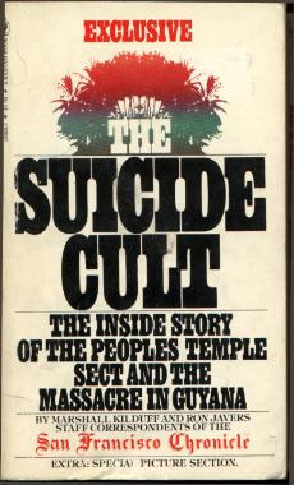 In the later 1970s, dozens upon dozens of ‘true-crime’ books flooded the shelves, riding a new wave of popularity and searching for their own fifteen minutes of fame. Kilduff and Javers, reporters for the San Francisco Chronicle, compiled their stories exposing charismatic religious leader Jim Jones (and his . . . well, Suicide Cult) into this addition to the field. Think Helter Skelter meets All The President’s Men.

All of this, of course, is just fine. Death and destruction, after all, is why you bought the book in the first place. Our publisher is even generous enough to include an “EXTRA: SPECIAL PICTURE SECTION” where we can dwell on photos of the rows upon rows of dead cultists, and even a strangely framed shot of the fish-bellied corpse of Rev. Jim himself. But the book has two major defects.

The first of these, the authors really brought upon themselves. In a soul-searching Prologue, they jump directly to the aftermath of the Jonestown massacre and ask the hardest question of all: Why did this happen? What hold did Jim Jones have over these people that he was able to convince otherwise rational human beings to commit murder and suicide?

Good questions, both. You jump in assured that the authors have a firm grasp on what is really important, what we really need to learn from this disaster. But then you never hear any discussion of them again! Since the bulk of this book is simply reconstituted news copy from the Chronicle, it is very heavy on what happened, on how it happened, where it happened . . . but very little to reply to that question of why. It’s hard to say if it was just cranked out too quickly to reach an attention-deficient marketplace, or if they were simply not paid to search too deeply for the reasons behind the facts – but we are left to guess blindly at motivations on our own.

But casting deep moral matters aside, the other matter I wanted to touch on isn’t so much a defect of the work as it is simply an oddity – an oddity that has left me, the cool composed reviewer, floored and out of control. Early in the book, the authors describe the early days of Rev. Jones’ church. Like many struggling pastors, he had to take on a second job:

In a bow tie and bold-striped tweed jacket, he traveled door to door selling monkeys, imported from South America and Asia, for $29 each. If the woman or man of the house wasn’t looking to buy the pets, well, perhaps they’d like to visit a new progressive church unlike any other . . . (p. 16) 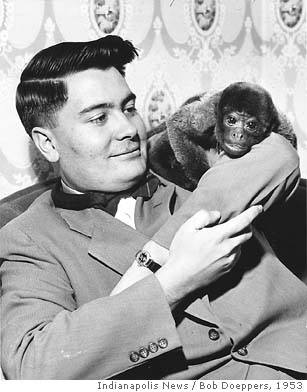 That’s right, folks . . . the Reverend Jim Jones, religious powerhouse, social architect, nut-job of several different flavors . . . SOLD MONKEYS DOOR-TO-DOOR. He knocked on people’s doors in the slums of Indianapolis, presumably with mammals on-hand, and did in-home demonstrations for the little lady of the house. And then, if that didn’t work (or maybe if it did, who can tell what connection there may be between monkey-lovers and potential cultists), he used the old bait-and-switch and tried to sell them on his church instead.

It’s one of those things just too ridiculous to be fictional, and I believe it implicitly. Kildoff and Javers are certain enough of it to refer back to the fact several times later in the book – though it could easily be that they were simply as flabbergasted by it as I was; as unable to get the image out of their minds. From that page onward, it becomes not so much the story of a murdering megalomaniac in religious vestments as a simple tale of a primate-pusher gone wrong.

And that, really, is where the book will always remain in my memory. Certainly, it documents a great tragedy without finally reaching out for any of the necessary explanations or moral assessments. But when it comes to describing who Jim Jones really was . . . the authors get it right on the monkey.